Greenlight > Games > SpaceEngineer's Workshop
Greenlight is being retired. For more information on how to submit games to steam, refer to this blog post.
This item has been removed from the community because it violates Steam Community & Content Guidelines. It is only visible to you. If you believe your item has been removed by mistake, please contact Steam Support.
This item is incompatible with Greenlight. Please see the instructions page for reasons why this item might not work within Greenlight.
Current visibility: Hidden
This item will only be visible to you, admins, and anyone marked as a creator.
Current visibility: Friends-only
This item will only be visible in searches to you, your friends, and admins.
SpaceEngine
Description Discussions45 Announcements5 Comments1312 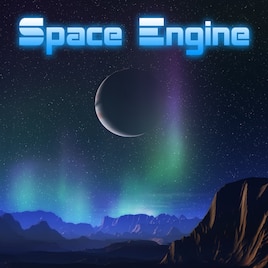 HarbingerDawn
Online
See all 356 collections (some may be hidden)

View SpaceEngine in the store

The latest version of SpaceEngine has been released! It adds many new features, including Oculus Rift support, 3D TV and anaglyph 3D support, joystick and gamepad support, and a lot of updates and improvements to the program. Click here[en.spaceengine.org] to see a changelog and download it. Many of these features would not have been possible without donations, so thank you very much to everyone who donated.

This will be the last major release before Steam support is added.

Read More
Description
Release date: 26.12.2013
SpaceEngine is a scientifically accurate and photorealistic 3D space simulator that models the entire Universe. It lets you explore any object that can be found in space - stars and galaxies, planets and moons, asteroids and comets, black holes and neutron stars. You may fly between the mountains on an alien planet, watch the sunrise and dancing aurora, then take off and fly to a neighboring moon to land in a huge crater. You may leave the solar system and fly through billions of stars, each of which is a fully modeled planetary system with hundreds of objects - planets, moons, and asteroids. You may approach and land on each and every celestial body and see its 3D landscape. You can even pilot starships and atmospheric shuttles. You may go out from our Galaxy and choose any of billions of other galaxies to explore.

Currently SpaceEngine is the first interactive science-based planetarium with procedural generation used for unknown areas and photorealistic graphics, awailable for Windows. Our first goal is improve the planetarium's capabilities - you can learn about planned features {LINK REMOVED}here. Our second goal is to make an online space exploration game, where players may control huge starships and explore the Universe, collect resources, build new ships and colonies, and share discoveries and technology with each other. Game mechanics in a realistic virtual Universe will be realistic too - read more below.

robonps May 18, 2019 @ 1:39pm
it's still alive there is still official blog posts on their website about the recent news

SpaceEngine has been Greenlit and is now listed in the Steam store. For the latest information, purchase options, and discussions for SpaceEngine, please see it on the Steam Store or in the Steam Community.
Visit Store Page
For more details Visit Community Hub
For latest discussions
If you really, really want to, you can continue to the Greenlight page. Information on this page may be out of date, since all the action has moved to the areas noted above.