Greenlight > Games > Psychotic Psoftware's Workshop
Greenlight is being retired. For more information on how to submit games to steam, refer to this blog post.
This item has been removed from the community because it violates Steam Community & Content Guidelines. It is only visible to you. If you believe your item has been removed by mistake, please contact Steam Support.
This item is incompatible with Greenlight. Please see the instructions page for reasons why this item might not work within Greenlight.
Current visibility: Hidden
This item will only be visible to you, admins, and anyone marked as a creator.
Current visibility: Friends-only
This item will only be visible in searches to you, your friends, and admins.
Power-Up
Description Discussions1 Announcements31 Comments336 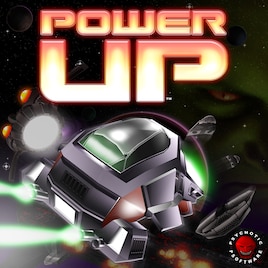 View Power-Up in the store

It's the end of an era. Here comes the final update in this series.
Enjoy...

So next week! What's still to be done? And how does my new job affect things?
Well, let's get to that.

I'm not going to start my next project just yet.
In fact, I'm going to have a bit of a hiatus.
Yep. you heard that right. I'm taking a break.

Remember when I started Power-Up? ...Well those fo you who do will remember that I was working full time. Tuesdays and Thursday evenings were mine to make my little game though, and Power-Up was born.

Well after New Year, I'm hoping to get back to a similar routine with a new game.

I'm doing two part time jobs at the moment and they make up full time work. In one I'm working as a casual mobile games artist for my friends at Lightwood Games and POWGI, and in the other I'm proud as punch to be the Sector Skills Champion for the Studio School in my hometown of Liverpool. Sure, I've only done my first week which was basically a couple of days to settle in and see the place, and sure, there's loads to suss out but I'm really looking forward to sharing some of my experience with the students and helping them to pick their direction in the industry.

That doesn't mean I'll be shirking my Psychotic duties. I'll be finding two evenings a week to get the slate clean for next year's big project, but admittedly, that slate-cleaning won't be as fun as a nice new project... here's what I've got lined up for my Psychotic evenings this year.

1. Honour my commitments to everyone who already bought Power-Up everywhere but Steam.

If you bought Power-Up before the Steam release then you showed faith in me and I really don't want you to have to buy it twice. I've set things in motion for everyone who bought the game on a bundle and am in the process of ordering the right ammount of keys for each and every one. I'm hoping to have the majority of this monster task done before the week end of the 13th/14th of September, but if you're still waiting round for a Steam code after that, throw me an email at psychoticpsoftware@gmail.com and I'll make sure you get yours direct from me.

As for my Power-Up Kickstarter backers, I'm also in the process of sending each and every one of you a Steam key as a little extra Thank You. I'm about 1/3 of the way through those as er, I'm doing it by hand.

So bear with me. I won't let you go without!

2. Release Flix The Flea for PC.

There's loads to do here and I'll be getting in touch with some of my favoutrite PC distributors to discuss a pre-Steam PC release for Flix (assuming it gets through Greenlight, of course). I'm going for the £1 price point with this one as it's a smaller project than Power-Up, though it does have bags of charm and I'd love you guys to keep upvoting it on Steam.

I've got quite a to-do list on Flix which includes, but is not limited to setting up some merch for the site, making the soundtrack available, and now I've got my ITIN, maybe I can even get Flix and Power-Up onto iTunes before the month's out.

3. Get Power-Up all sparkling on iOS and Android

2-bit Games has done a stellar job in getting the body of the game ready for me and we've managed to get all of the levels working and scrolling nicely. If you remember back, framerate and jumpy backgrounds was an issue in multiple resolutions. Those issues are all but sorted now, but there are basically three major issues remaining, and the ball's in my court there.

a. the 640x1136 version currently uses quick fix graphics which are all a bit too fat for it. I'll be getting all the assets for that version to basically match the 640x960 version, except for the static backgrounds of course, which will be custom built for that resolution. I'll also be giving every other resolution the once over to make sure thate are no graphical rogue-bludgers in the resizes.

b. Get everything paced right. This includes bullet speeds, shot rates enemy energy and pretty much every variable value in the game. Balancing this for iOS is no mean feat and probably one that I'm best suited for having done the Xbox/PC versions.

c. Get set up as an Apple developer so we can start device testing. This is basically a cashflow thing and once I've been paid this month I'll be hitting that one. We've got a brilliant QA Lead with loads of experience who 2-bit and I have both worked with before and I know he won't pull any punches when it comes to the quality of the game.

I've also got a well known publisher for the iOS version. They're keen and have every belief that we can pull an awesome iOS version out of the bag, so once we're running on device I'll be getting a build to them in the hopes of moving forward there. Until then, that's as much as I'm saying.

2-bit tells me that getting Power-Up to Android from there isn't such a big step, so hopefully that'll be happening before the new year too... but you know the score. The further ahead of ourselves we get, the rougher the plan.

Now, all good things must come to an end, and in two weeks I'll be doing the last in this line of fortnightly updates. I know, it's gonna be wierd without em, right?

The thing is, each one, typed or filmed takes somewhere between two and four hours to get done and out. when I was working five afternoons a week, that was sustainable but during periods of two evenings a week... well, put it this way, If I do updates I'll have very little to tell you as a quarter of my time will be taken up with well, updates!

I will wrap up 2014's Power-Up/Flix Updates with a final video in two weeks time that will re-itterate the plan(the exact day depends on my availabillity though), but don't worry. We've been here before. Remember those early days? I'll still be on twitter loads and loads, and facebook too.

...not to mention that next year I'm gonna start on a lovely new juicy Power-Up sized project, and probably the odd little Flix The Flea sized one as well. I'll keep you posted. ;)

Right. Better go. Jo's just very kindly made my dinner and I've still got loads to do! :S
Catch you in a couple of weeks for one last video update!

Spanning vibrant locations to a monster soundtrack, Power-Up thrusts you into battle with a diverse range of fighters, freighters and titanic level guardians. If you loved retro SHMUP classics like R-Type, Hellfire or Project-X, you'll get a real kick out of Power-Up's slick, detailed visuals, challenging gameplay and impressive arsenal of weapons.

SYNOPSIS
The Earth is doomed! As you pilot the prototype fighter, Weapon-F through the debris of your vanquished escape shuttle you come to realise that you are the last human alive. You alone must take on the army of reptilian monsters responsible for the destruction of humankind. You alone must carry out your final mission... Revenge!

ACCOLADES
Power-Up was released on XBLIG to critical acclaim for its "smooth-as-butter" playability and its RPG-like weapon system, not to mention its formidable bosses and belting music!

Originally posted by Plus 10 Damage:
"Clearly one of the best titles in the 360's arcade"

Originally posted by The Cult Den:
"I couldn't recommend this game enough"

Originally posted by Sustainable Gamers:
"Reaches back to a respectfully nostalgic place" - 10/10

To find out more, visit:
http://www.psychoticpsoftware.com
Popular Discussions View All (1)

Steam keys... Good question. And yep, I'm on the case. I er, released Power-Up on the same day I started my new job so you can probably imagine it all went a bit haywire for a while. Things are calming into a rythm now though so I'm slowly getting on top of things.

I'm in the process of getting Steam code orders from the bundles and various other placed which have sold Power-Up and over the course of the next week or two I'm hoping to get everyone who bought and backed the game on Kickstarter their Steam keys.

If you think you've been missed out after saaay, the week end of the 13th/14th and your distributor hasn't sent you your key, do drop me a line via my email address psychoticpsoftware@gmail.com and I'll order and send you a key directly.

Right, better get back to it. Been a long day and it ain't over yet. ;)

Hey WarfistStorm. Thanks very much for the love. With converting the awards, etc over to Steam, I'm not sure if they can do that sort of thing as Power-Up's my first go ;) ...I'm still working out how to get awards into the Steam version though, so it might not be an issue just yet.

What I can say is drop me a line after the release and as you bought a copy already I'll make sure you get a Steam key too. :D

✪Old Man Jenkins'̏̏̏̏̏̏ Aug 16, 2014 @ 1:32am
Voted and CONGRATZ on the Greenlight!! ^_^
One question I may have then: If I purchased the game off Humble Bundle literally RIGHT before you got the Greenlight on Steam, is there a way you, or anyone here, may know of to "convert that" into "Steam Edition"? ;) You know, Achievements, possible Game Cards, etc. =D
Again, Gratz to you man! (And wow...ONE MAN did all this??) Mind = BLOWN haha

Power-Up has been Greenlit and is now listed in the Steam store. For the latest information, purchase options, and discussions for Power-Up, please see it on the Steam Store or in the Steam Community.
Visit Store Page
For more details Visit Community Hub
For latest discussions
If you really, really want to, you can continue to the Greenlight page. Information on this page may be out of date, since all the action has moved to the areas noted above.