Greenlight > Games > The Repopulation's Workshop
Greenlight is being retired. For more information on how to submit games to steam, refer to this blog post.
This item has been removed from the community because it violates Steam Community & Content Guidelines. It is only visible to you. If you believe your item has been removed by mistake, please contact Steam Support.
This item is incompatible with Greenlight. Please see the instructions page for reasons why this item might not work within Greenlight.
Current visibility: Hidden
This item will only be visible to you, admins, and anyone marked as a creator.
Current visibility: Friends-only
This item will only be visible in searches to you, your friends, and admins.
The Repopulation
Description Discussions45 Announcements18 Comments1655 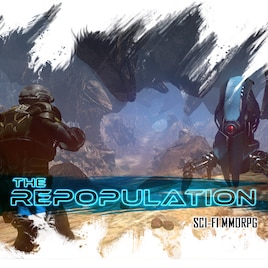 View The Repopulation in the store

We have officially released our Early Access for Steam and it is now available via Steam. The starting price is $39.99 and is discounted for a week at 15% off for $33.99. We wanted to thank everyone for Greenlighting us way back in January. As a result of releasing for Early Access we have dropped NDA as well so you should be seeing some streaming and a bit more conversation in the next few days about the title as a result.

We also released a new Video for the Alpha 4 release so please feel free to check it out.

We have released our next Alpha Teaser video here:

You can check it out below. In addition, on Saturday at 2 PM EDT (6 PM GMT) we are going to have another Q/A, giveaway, and other top secret stuff so come join us on our Twitch channel this Saturday or check out the video afterwards. http://www.twitch.tv/the_repopulation

Read More
Description
Release date: Late 2014
The Repopulation is a Massively Multiplayer Online Role Playing Game in a science fiction setting. In many ways it is a throwback to the social aspects and sandbox driven gameplay that made titles like Star Wars Galaxies and Ultima Online successful. But it also integrates more recent innovations and introduces an array of its own unique wrinkles.

The driving force behind this game is choice to play the game in the way that you want to play it. The choice to play the game like an RPG or a first/third person shooter. To advance your character through combat or peaceful means. The freedom to craft and harvest without being forced into combat. To act as a hero or a villain. A thief, diplomat, home builder, tamer, crafter, or an entertainer. To participate in Player vs. Player combat or to avoid it altogether.

The Repopulation has been Greenlit and is now listed in the Steam store. For the latest information, purchase options, and discussions for The Repopulation, please see it on the Steam Store or in the Steam Community.
Visit Store Page
For more details Visit Community Hub
For latest discussions
If you really, really want to, you can continue to the Greenlight page. Information on this page may be out of date, since all the action has moved to the areas noted above.