Greenlight > Games > khablabla's Workshop
Greenlight is being retired. For more information on how to submit games to steam, refer to this blog post.
This item has been removed from the community because it violates Steam Community & Content Guidelines. It is only visible to you. If you believe your item has been removed by mistake, please contact Steam Support.
This item is incompatible with Greenlight. Please see the instructions page for reasons why this item might not work within Greenlight.
Current visibility: Hidden
This item will only be visible to you, admins, and anyone marked as a creator.
Current visibility: Friends-only
This item will only be visible in searches to you, your friends, and admins.
CosmoKnots
Description Discussions0 Announcements6 Comments66 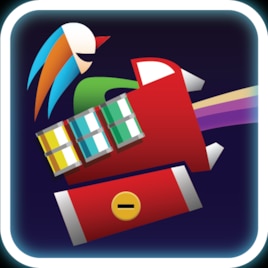 khablabla
Offline
See all 4 collections (some may be hidden)
Recent Announcements View All (6)
Gimbal Cop is changing its name!
March 11, 2014 - sc0ne

Can we even do that on Greenlight? I think so. Anyway, we've decided that since the game has evolved quite a bit since its inception, and because we were never really fans of the name in the first place, that it's time for a name change. Our favorite so far is CosmoKnots, but we're open to suggestions. Got any, Greenlight?

Gimbal Cop v0.2.3 is live! This update includes some fixes, new music, and a settings screen so you can finally change your mouse sensitivity! Check out this in-depth blog post about what we've done. {LINK REMOVED}http://tinyurl.com/mfp73nt

Don't forget to check out the replay linked in that post! {LINK REMOVED}http://bit.ly/1orDVDX

If you don't already have the game, you can buy it now for $5+ at www.gimbalcop.cop

The current alpha state of the game features "Snake Mode," where a single-player (for now!) Architect flies freely in space, trying not to crash into the level and the track they have created behind them in a twist on the classic 2D game. Players fly through a branching-difficulty campaign, collecting goodies while they avoid their tail and other obstacles, and completing challenge paths to unlock harder levels and campaign branches.

What we are working on:
- Another mode: racing - Runner players compete to catch up to the Architect player (who is making the track), trying to complete the level and escape before the Runners catch up.
- Powerups and obstacles along the way
- Multiple tracks to switch between: Octopus (what we have now), Western, Spine, Candyland, and Lava. Each track has unique obstacles, placed automatically by the track itself and intentionally by the Architect.
- Support on multiple platforms: iOs, Mac, PC, Android, with more on the way!
- Play by yourself, or with friends over a local Wifi connection
- Impressive AI that allows for excellent solo games

As Gimbal Cop is in alpha right now, there are features still deep in production and rough edges being hammered out. You can keep up on the latest developments on our blog, Facebook, and Twitter.

About Defective Studios
We are a small, independent studio that works on game, tools, software, and web development. As a highly versatile team of artists, coders, designers, pirates, and rocket scientists, we're here to explode the game development world from the inside out with crazy ideas about embracing player creativity, narrowing the gap between gamers and developers, and generally making the world a more fun, interesting, creative place. Our work has been seen at PAX East, the first ever Boston’s Festival of Indie Games, Boston Unity Group, indie community groups such as Boston Indies, and other professional game development events. Gimbal Cop is our first commerically released game, and we’ve been pouring everything we have into it to get it absolutely ready for release.

Jonomf  [author] Jan 28, 2014 @ 11:07pm
@FictionX oh crap, thanks for pointing that out! Looks like the skybox settings got messed up in our last merge and we didn't test that final state in the Rift (doh!). It's fixed, new build will be with Humble very soon. Thanks for picking the game up! :)
< >