Store Page
Cities: Skylines > Guides > Cel's Guides
This item has been removed from the community because it violates Steam Community & Content Guidelines. It is only visible to you. If you believe your item has been removed by mistake, please contact Steam Support.
This item is incompatible with Cities: Skylines. Please see the instructions page for reasons why this item might not work within Cities: Skylines.
Current visibility: Hidden
This item will only be visible to you, admins, and anyone marked as a creator.
Current visibility: Friends-only
This item will only be visible in searches to you, your friends, and admins.

How to Bypass the Paradox Launcher (All Platforms)
By Cel
Bypass the new Paradox Launcher. Boot up your game a minute faster! This guide works on game version 1.12.x and 1.13.x.
(Now the #1 guide of the year on Steam for Cities: Skylines, for very, very obvious reasons!)

Not Paradox Launcher (All Platforms)

Some methods showcased in this guide are apparently also compatible with Europa Universalis 4 (notably the Traditional Method), but no guarantees are given.
Introduction
This is a quick and easy guide on how to bypass the Paradox Launcher implemented in the last update. Tested on Windows 7, Windows 10, macOS Mojave, macOS Big Sur and Ubuntu GNU/Linux 18.04. Bypassing the launcher can easily speed up Cities Skylines startup times by an entire minute (or more), and prevent telemetry (your own data) from being sent to three different servers across two different continents.

Traditional Method (Windows)
The most reliable for bypassing the Paradox Launcher involves creating a batch file, and modifying your Steam launch options. This method will continue to work after future updates, unlike the "fast method" that will be described below.

Step 2: Create a batch file
Go to the directory where Cities Skylines is installed: by default, this is
C:\Program Files (x86)\Steam\steamapps\common\Cities_Skylines
Open Windows Explorer / File Explorer, and navigate to the install directory (copy-paste the link above if you installed it in the default directory). Turn on file extensions (View tab on Windows 10, Tools on Windows 7). Create a text file. Rename the text file "Cities.bat", making sure the file extension is changed.

Step 3: Edit the batch file
Open the batch file in Notepad, by right clicking it and clicking on "Edit". Within it, paste the following text:
Cities.exe %command%
. Save the file.

Note: Typical launch options / modifiers (e.g. --noWorkshop) work, but need to be placed between "Cities.exe" and "%command%" in the Cities.bat file, and not in the launch options (as detailed below in Step 4), or else they will not work.

Addendum: If you want to hide the command prompt window associated with launching the game via the method described in this guide, replace the code in the batch file with the following:

start Cities.exe %command%
Step 4: Integrate the batch file with Steam
By this point, if you double-click on the batch file, you should be able to launch the game WITHOUT the Paradox Launcher -- however, this isn't guaranteed. If the Paradox Launcher tries to install itself, just uninstall it again, and continue with Step 4. If it works, congrats - however, if you want to launch the game from Steam, you'll have to continue with Step 4.

Right click on Cities Skylines in your list of games, and click on Properties. Click on Set Launch Options. Afterwards, type the following into your Launch Options:
Cities.bat %command%
You may follow the picture below for reference. Do not forget to save! 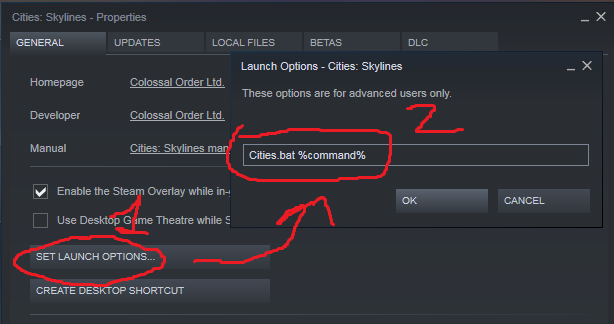 You should now be able to play Cities Skylines, right from Steam, as if the update never happened.

Note: If you see a command prompt window open while the game is open, this is normal. This is because of the batch file used to launch the game.

Note: Steam Overlay will not work. Screenshots will still work; however, they will be stored at "%localappdata%\Colossal Order\Cities_Skylines\Screenshots". Use F12 to take a screenshot.

Step 5: Delete the launcher installer (optional)
The file name of the launcher installer is launcher-installer-windows.msi. It is in the same directory as the batch file you created (where Cities.exe is). It is safe to delete this file after performing this procedure, but only if you've managed to start up Cities: Skylines successfully without the launcher trying to install itself - it's a good way to save 75 MB on your hard drive.

Alternative fixes you may want to try (Windows)
There are several other methods which have been partially proven to work. If the method detailed above does not work, feel free to try to methods as detailed below:


This is actually the first method I devised in order to get rid of the Paradox Launcher. When there's a will, there's a way!
Linux Method (Linux)
Unfortunately, update v1.12.3 is preventing any Linux users from playing Cities: Skylines, thanks to the new launcher. However, there still is hope, if you are looking forward to playing now!

For Linux, follow the steps for the Traditional Method (as outlined above), except:

For step 4 add
/home/USERNAME/.steam/steam/steamapps/common/Cities_Skylines/Cities.x64 %command%
instead of the equivalent Windows launch option, replacing USERNAME with your Linux username.

Thanks mLine for sharing this information!

Note: Mac OS requires a different method, detailed below.
Fast method (Windows)
I created this Fast Method in order to simplify the process of making Cities Skylines work without the launcher. You only need to click once on your keyboard, and everything is done for you.

NO GUARANTEES THAT THIS METHOD WORKS. USE TRADITIONAL METHOD IF THIS METHOD FAILS TO WORK.

Step 1: Run the patch
Download the patch tool here[kevindong.org]
To run this tool, you simply have to double-click the file, and follow the instructions on screen. This method involves replacing a file ("dowser.exe") within the Cities: Skylines directory with a modified one, which directly launches the game instead of launching the launcher.

Step 2: Set your Steam launch options
You should be able to now play Cities: Skylines as per usual. However, Steam will overwrite "dowser.exe" upon an update to the game. Step 2 is necessary to remedy that.

Right click on Cities Skylines in your list of games, and click on Properties. Click on Set Launch Options. Afterwards, type the following into your Launch Options:
cs.exe %command%
You may follow the picture below for reference. Do not forget to save!

You should now be able to play Cities Skylines, right from Steam, as if the update never happened.

Note: If you see a command prompt window open while the game is open, this is normal. This is because of the batch file used to launch the game.

Note: Steam Overlay will not work.

Method currently does not work. Please try another method.
Mac OS version (Mac OS)
Mac support has finally been added! Right click on Cities Skylines in your list of games, and click on Properties. Click on Set Launch Options. Afterwards, type the following into your Launch Options, if you are on macOS Catalina (10.15) or earlier:
/steamapps/common/Cities_Skylines/Cities.app/Contents/MacOS/Cities %command%
You may follow the picture featured within the "Traditional Method" if you need more help.

For macOS Big Sur (10.16 or 11), the absolute full path is required. As such, type this inside:
/users/[username]/Library/Application\ Support/Steam/steamapps/common/Cities_Skylines/Cities.app/Contents/MacOS/Cities %command% [/cpde] Thanks MoneyMakesMurder for sharing the original method, and thanks ArcadeFuhrer for sharing the Big Sur updated version!
Steam Overlay-enabled method (Windows)
This method allows the Steam Overlay to work in-game, but will break after any update to the game. Recommended if you absolutely need the Steam Overlay to work.

2. Open a command prompt in the Cities: Skylines directory. To do this, right click on Cities: Skylines within the list of games in your Library, click Properties, click "Local Files", and click "Browse Local Files". Afterwards, right-click within the folder while holding down [SHIFT], and you should be able to click on "Open command window here".

3. Rename dowser.exe. You can use the command "ren dowser.exe dowser.old" in Command Prompt, or do so in Windows Explorer.

Thanks botcherO for sharing this method!
Not Paradox Launcher (All Platforms)
Thanks to the efforts of Coyotee, a new program has been created in order to bypass the launcher, while also allowing Steam Overlay to work: this method uses by replacing the launcher by a completely different, significantly lighter launcher that's actually useful (toggling game settings, etc.)

More instructions are provided in the GitHub link above (guide written by Coyotee)!
< >
368 Comments

knocks Apr 9 @ 9:02am
Thank you, I had not played this game for some time and was shocked to find the addition such a parasite as the Paradox Launcher.

Cel  [author] Mar 23 @ 6:39pm
@_TheBunnymaster_ Thanks! Please let me know if anything breaks, because that's always what ends up happening with time.

Killer🔥keys Feb 23 @ 10:37pm
an app or something has changed the registry......I just wanna continue my 2000 hours played with or without the launcher

Cel  [author] Feb 20 @ 5:04pm
@Killer keys It doesn't need to! You just need to change the link to exactly where the Cities.exe binary is located. For example, if it's at D:/SteamLibrary, you'll have to point it there instead of the normal C drive.
< >