Store Page
Tabletop Simulator > Guides > Jackson =D's Guides
This item has been removed from the community because it violates Steam Community & Content Guidelines. It is only visible to you. If you believe your item has been removed by mistake, please contact Steam Support.
This item is incompatible with Tabletop Simulator. Please see the instructions page for reasons why this item might not work within Tabletop Simulator.
Current visibility: Hidden
This item will only be visible to you, admins, and anyone marked as a creator.
Current visibility: Friends-only
This item will only be visible in searches to you, your friends, and admins.

Utilizing a second monitor with Spectator_Screen
By Jackson =D
TTS has had the capability of showing a secondary Spectator view on another monitor since May of this year, yet oddly no instructions were provided on its use. This guide will detail how to activate the feature and some of the options available.

Opening the Console and using Commands

Comments
Opening the Console and using Commands
To start using commands, you need to open the console. By default, the console is bound to the Tilde key, underneath escape. You can rebind this key at the bottom of the Controls tab in the Configuration window. 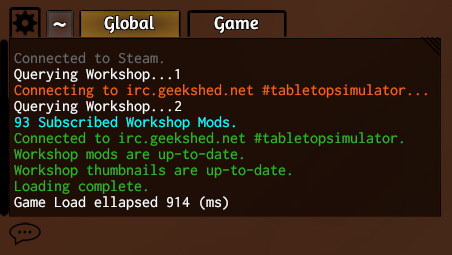 Pressing the key should open a dark variant of the chat window.
All commands provided need to be entered into the console for them to take effect. If you are curious about what other commands are available, you can enter Help to be presented with a full list of commands, or Help followed by the name of a command for further information on what the command does. In most cases, type 1 after a command to enable it, and 0 to disable.
Using the Spectator Window
In the console, enter the command spectator_screen 1 to enable the spectator camera on your secondary monitor.

Currently the spectator view will mimic your main camera at all times, which isn't very useful. To get it to focus on a specific area, move your camera until it matches the view you wish to see on the spectator camera (You can press P twice to enter the top-down camera, which is often helpful for this view), then hold CTRL and press 1 to save the camera position.
Note that you can use different numbers to save multiple positions. Useful for boards with a lot of important areas!

Enter the command spectator_camera_load 1 to move the spectator camera to the specified position.

After loading a camera position, the spectator camera will no longer follow your main view and instead stay locked to that position. To return to normal, use the command spectator_camera_follow_player 1.

Binding
Typing the full commands each time can quickly become tiresome. With the bind command you can set these commands to keyboard keys to make operating the camera easier. The command is typed as bind *KEY* *COMMAND*. So for example, to bind F1 to move the spectator camera to camera position 1 the command would be bind F1 spectator_camera_load 1. The Unbind command will remove the binding assigned to the key.
Alternatively, you can use ui_buttons, which are mentioned in the commands section below, but require more configuration.

Jayven Foxx Jan 13, 2021 @ 10:08am
Hi there, I am having the same problem as others on here in that once the spectator screen is open, no combination of commands will close it again until I quit out of TTS completely! Any news on a solution to this one? Great work though!

ifus Sep 18, 2020 @ 9:38am
When I am launching TTS on dual monitor, it only launches on the main screen, is there anything I should do to make it work? Also asked a friend to try it, did not work for him as well.
It would be really nice to play Gloomhaven on dual monitor.

BA|Oddbod May 19, 2020 @ 10:57am
I am also unable to turn off the Spectator Screen once it's turned on. It says "Spectator View displayed on screen cannot be disabled" Any suggestions?

Sawtaytoes May 15, 2020 @ 12:34am
It's nice to see there are commands to setup a spectator view, but for some reason, it's choosing monitor 3 instead of monitor 2 for that on my machine. Is there a way to specify which monitor to use for spectating?