Greenlight > Games > Oscarhobs's Workshop
Greenlight is being retired. For more information on how to submit games to steam, refer to this blog post.
This item has been removed from the community because it violates Steam Community & Content Guidelines. It is only visible to you. If you believe your item has been removed by mistake, please contact Steam Support.
This item is incompatible with Greenlight. Please see the instructions page for reasons why this item might not work within Greenlight.
Current visibility: Hidden
This item will only be visible to you, admins, and anyone marked as a creator.
Current visibility: Friends-only
This item will only be visible in searches to you, your friends, and admins.
Boogerman "A Pick and Flick Adventure" 20th Anniversary
Description Discussions5 Announcements4 Comments507 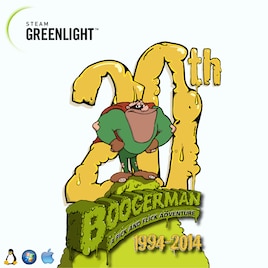 We are incredibly happy to announce our brand new 2 player CO-OP MODE, starring EARTHWORM JIM! This brand new addition not only comes with the new co-op game mode featuring everyone’s favorite Annelid as a playable character, but also includes levels exclusive to co-op!

Check out the full update on KICKSTARTER!

As always, we want to send many thanks to everyone for taking the time to support us here on Steam Greenlight, and on Kickstarter! We hope everyone's weekend is off to a great start!

Today we have links to a couple of interviews that we have done over the last few days. A few people have asked some questions about the story, about Boogerman's background, and about the origins of the game in general.

WELL, hopefully these two links will answer some of those questions for you! In the Game Informer interview I explain the technology behind the Fart Copter propulsion system, and talk fart foley with Dan Ryckert.

AND, on the BostonBastardBrigade podcast you can hear a little about the origins of the original game, as well as some things to expect from the new game. We hope you enjoy!

Read More
Description
Release date: Nov. 2014
The Story
It’s a dark and stormy night at Professor Stinkbaum’s lab where a machine has been built to save the world by trans-existing all pollution to a far-away location in time and space dubbed Dimension X-Crement.

Eccentric millionaire Snotty Ragsdale has taken a job at the lab to investigate its safety and to find out exactly where the pollution is going. He has a bad feeling about Professor Stinkbaum’s latest contraption.

This night his suspicions will come true...

Join Boogerman on his journey to uncover the mysteries and evil that lurk within Dimension X-Crement!

Game Overview
Playing as Boogerman, it's up to you and your bodily functions to explore Dimension X-Crement, take on Booger Meister, his evil Henchmen (and woman), and his army of hideous creatures,including the Nose Goblins.

The game is broken up into 6 different worlds:
Each world consists of 3 levels, plus 2 sewer "bonus" areas. In addition, each world contains it's own boss level, for a total of 18 full levels, 36 bonus areas, and 6 bosses.

Boogerman 20th Anniversary will feature the core mechanics from the original game, including:

The game will also include entirely new game mechanics and gadgets such as:
[/b]
[/list]

Other new elements include:

Boogerman 20th Anniversary will be packed full of non-stop side-scrolling fun with brand new disgusting characters to meet and defeat!

The History of Boogerman
Boogerman: A Pick and Flick Adventure is a 2D platform video game created by Interplay Entertainment and released for the Sega Mega Drive/Genesis in 1994 and later on the Super Nintendo Entertainment System (SNES) in 1995. The Genesis version was also released on the Wii Virtual Console in North America on November 24, 2008 and in Europe on December 12, 2008. Boogerman also made a cameo appearance as a playable character as the rival of Earthworm Jim in Interplay's ClayFighter 63⅓.

The original game animation consisted of over 2000 hand drawn frames. Each frame of animation was drawn on animation paper, cleaned up, inked, scanned in, shrunk down, and colored before it went into the game.
< >
507 Comments