Greenlight > Games > Juicy Beast's Workshop
Greenlight is being retired. For more information on how to submit games to steam, refer to this blog post.
This item has been removed from the community because it violates Steam Community & Content Guidelines. It is only visible to you. If you believe your item has been removed by mistake, please contact Steam Support.
This item is incompatible with Greenlight. Please see the instructions page for reasons why this item might not work within Greenlight.
Current visibility: Hidden
This item will only be visible to you, admins, and anyone marked as a creator.
Current visibility: Friends-only
This item will only be visible in searches to you, your friends, and admins.
Knightmare Tower
Description Discussions5 Announcements2 Comments345 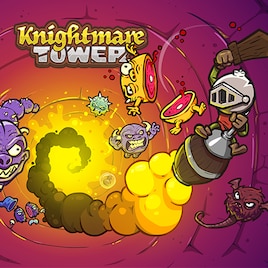 Juicy Beast
Offline
See all 36 collections (some may be hidden)

View Knightmare Tower in the store


(And thank you very very much for all your help and support. Hope you’ll like the Steam version of the game!)

Yes, it’s happening, Knightmare Tower is pretty much there. Thanks to all of you who voted.

We now just need that one last push to make it high enough in the top 100 and hopefully get Greenlit in the next batch!

Make sure to let all the people in the world know about this. We need all the support we can get!

Read More
Description
Break through ceilings, rescue princesses and escape boiling lava as you slash your way to the top of the Knightmare Tower!
**Just so you guys know, this is a better, revamped version of the old Flash version. It's also available on OUYA, so it already has controller support. It's as well suited for a TV screen as for a PC monitor.

"There are triple-A, $60 games that pale in comparison to the enjoyment we got from Knightmare Tower"
- GamesRadar.com

"Knightmare Tower hooked me for over an hour, and I had to force myself to stop playing"
- Kotaku.com

"One of the few games that would be equally at home on the App Store or Xbox Live Arcade"
- Eurogamer.net

"This is a great game and an easy recommendation to make."
- Polygon.com

Slayer_Mark Jun 17, 2014 @ 5:53pm
This game reminds me of a freeware game called Icy Tower. But this game is so much better. Love it. Well done. Very Enjoyable.

Juicy Beast  [author] May 15, 2014 @ 7:49am
Hi Erixon, Flash uses Local Shared Object to save data and cleaning program can sometime delete it, making you lose your progression.
But don't worry, this won't happen with the Steam version of Knightmare Tower ;] !

Ravenfur May 9, 2014 @ 1:16pm
Wait, what, really? Well, can't say I expected this game on Steam. Played the föash version sooo much.
One important question though: When I played the Flash version, I played for about three hours, closed my browser and when I started the game abit later, I had to start all over again. So my question is: Can you save your progress, or do you have to start all over again if you don't finish the game?

Knightmare Tower has been Greenlit and is now listed in the Steam store. For the latest information, purchase options, and discussions for Knightmare Tower, please see it on the Steam Store or in the Steam Community.
Visit Store Page
For more details Visit Community Hub
For latest discussions
If you really, really want to, you can continue to the Greenlight page. Information on this page may be out of date, since all the action has moved to the areas noted above.