Greenlight > Games > Pill Box's Workshop
Greenlight is being retired. For more information on how to submit games to steam, refer to this blog post.
This item has been removed from the community because it violates Steam Community & Content Guidelines. It is only visible to you. If you believe your item has been removed by mistake, please contact Steam Support.
This item is incompatible with Greenlight. Please see the instructions page for reasons why this item might not work within Greenlight.
Current visibility: Hidden
This item will only be visible to you, admins, and anyone marked as a creator.
Current visibility: Friends-only
This item will only be visible in searches to you, your friends, and admins.
Hyper Light Drifter
Description Discussions31 Announcements1 Comments1469 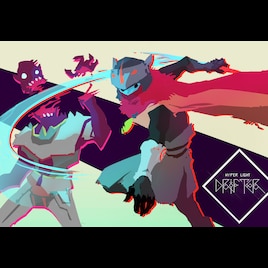 A seasonal greeting, Drifters. We've been hard at work over at Heart Machine, working out all the pre-alpha bits: locking down features, the scope of the game (landmarks, dungeons, towns), lining up the important story elements (in game and for the art book), and just generally doing a lot of coding and designing, conversing and drawing, animating and sound effecting.

We had a successful public event over at Giant Robot 2 (projected on the side of their shop in the evening), which a few stray backers showed up for; it was a joy to meet you all and watch you perish several times in-game. 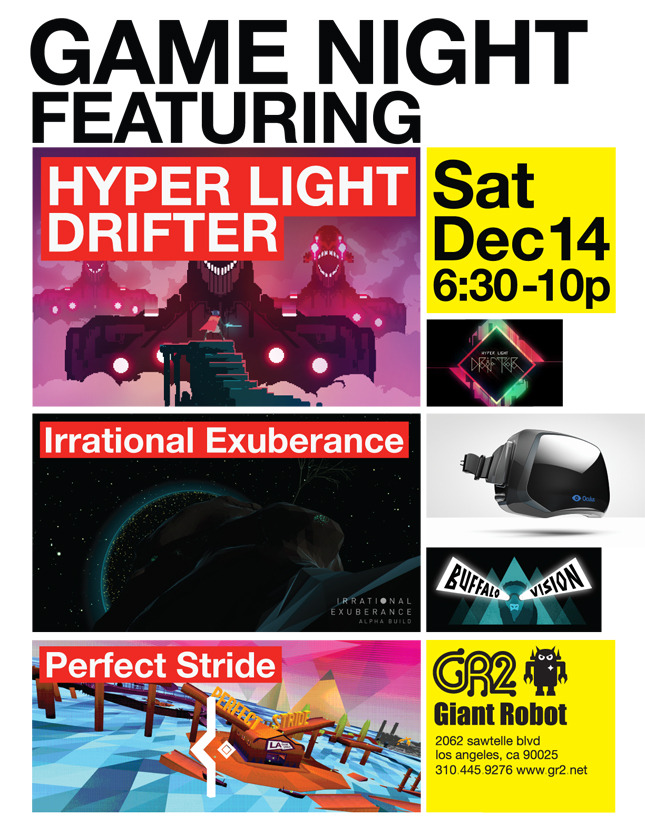 Nathan over at Rock Paper Shotgun had a stab at the game as well: http://www.rockpapershotgun.com/2013/12/21/lets-chattersplatter-over-hyper-light-drifter/

Please keep in mind this is an early build yet (hence the term pre-alpha), so there are plenty of sound effects not in place, the music is not a final track for the area, little graphical glitches/incomplete animations abound, and everything is subject to be tweaked (or killed!) as we progress. Also, he did not nab the projectile weapons, so it's sword-play and shield in the video. He made a fair go of it, considering we provided him with very little context!

Team and plans
Beau Blyth, my first partner in design on this beast, recently finished up development on Samurai Gunn , an amazing arena fighter (intense, often ends in controller throwing and screams of wicked glee) which is up on Steam and his site [teknopants.com] now! Instant and endless fun with such a fine soundtrack. He's been part time for the past month as he crunched to release; Teddy has been doing a damn fine job picking up all the structural design/coding duties in his absence. Beau is coming back full time starting January. Woo!

We'll be moving into an alpha state after that, meaning we will have the core mechanics and systems, all over-arching level designs, general enemy sets and patterns, sound effects and weapons in place for tweaking, testing, and breaking. We will continue to refine systems, send out builds and play-test, all the while keeping you lovely souls updated as much as we can without spoiling anything.

One of those updates will include an introduction to our sound designer; he has been working on some behind the scenes video that features a look into the dark and arcane art of sound effect creation. Pro-tip secret**: he uses nothing but a bent dinner fork, old breakfast meat, and a 1997 Dell mouse scavenged from an alleyway bin. **jokes

Rich (Disasterpeace) also has plans for some behind the scenes on his process for the soundtrack, and we hope to release bits of it as development continues.

Rewards and other items
I have a quick peak at a few of the prints (these images are in a unfinished state), which will be revealed in their full glory soon. I'll put up an official survey/vote for them upon completion. 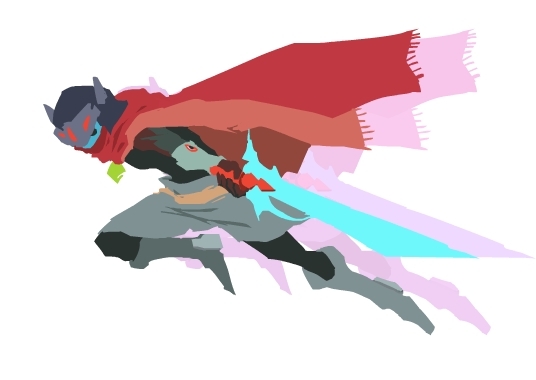 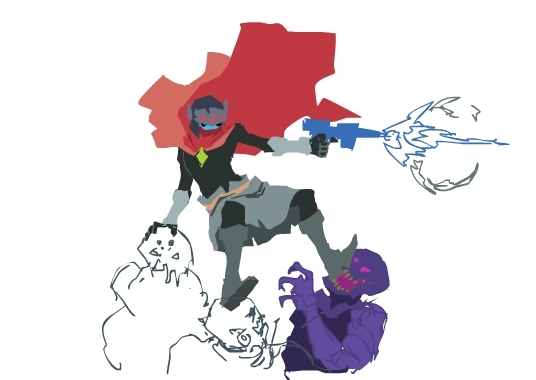 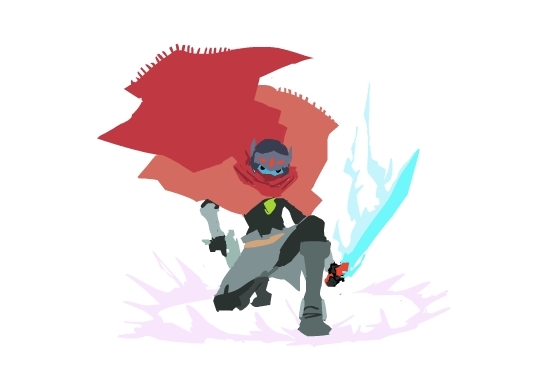 Rita Hunt has been prototyping the Drifter plushy, which we plan to do a limited run of 50 to gauge the desire for such an item (maybe use as a prize in the future?). You can see a much-closer-to-final version below: 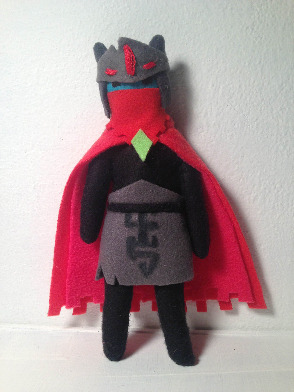 As for surveys; the first round will be the t-shirt tier, sent before year's end, as we'll be producing the first run with our vendor ASAP!

Wallpapers will be the next go around, as they're relatively pain free to distribute, and other rewards will go out upon completion as we continue to send out surveys.

Final bits
Considering we now have Beau back full time, we'll be doing more regular, smaller updates, rather than having these longer stretches in between.

Also! another contest is in order, with some physical prizes this time since we won't be bound by KS rules on our site. I have a few things in mind for the contest itself, though feel free to throw your ideas in the comments for consideration!

Lastly, I hope everyone is able to spend this holiday with people they love and reflect on the positives in the their lives. I've been incredibly fortunate this year; it rather quickly changed from the worst year of my life to the best so far. Finding a diagnosis, receiving effective treatment and maintaining a far better status health-wise than the first half of the year. Enjoying this successful Kickstarter with such an incredible community behind it. I'm not sure I've expressed how much it means to have the amazing support and enthusiasm on this project, to have people share their own incredibly personal struggles with a stranger like me, and to speak and meet with backers from all over. Thank you, Drifters; have an amazing new year.
Read More
Description
Release date: 2015
Hyper Light Drifter is a 2D Action RPG in the vein of the best 8-bit and 16-bit classics, with modernized mechanics and designs on a much grander scale.

Visions for this game have been fluttering in my skull for ages; something dark and fantastic, with giant forests to navigate, huge floating structures to explore, deep crumbling ruins to loot, massive throngs of enemies to rend, and behemoths both flesh and mechanical to overcome. I want it all to be as beautiful as possible, forging color with the dark and eerie wastes and intimidating landscapes. It plays like the best parts of A Link to the Past and Diablo, evolved: lightning fast combat, more mobility, an array of tactical options, more numerous and intelligent enemies, and a larger world with a twisted past to do it all in.

- Rip through enemies with responsive, fun combat; engaging and brutal. Upgrade weapons, discover new equipment and trek deeper than ever.

- Traverse a dark, detailed and interconnected world with alternate paths and secret loot. Miyazaki films have taught me that beautiful animation and design add life to a world. From characters to background elements, everything is lovingly crafted while I hum show-tunes and squint suspiciously at the flickering pixels until they perform as intended.

- A challenge - The game is accessible and easy to pick up, but difficult to master and complete; enemies and hazards become more vicious and numerous, so players must use clever tactics to avoid death. (Some yell hurtful phrases at players simply to bring tears to the cereal bowl below.)
< >
1,469 Comments

erkle Mar 16, 2016 @ 5:09pm
This game looks sooo amazing, I've pre-ordered this after looking into it once because I am sold 110% that this will be successful. It brings back the 2D elements of old side scrolling games and the 8/16-bit along with elements of Dark Souls. I'm so excited for this game and I can't wait to see what it will become in the future. 9.8/10

Hyper Light Drifter has been Greenlit and is now listed in the Steam store. For the latest information, purchase options, and discussions for Hyper Light Drifter, please see it on the Steam Store or in the Steam Community.
Visit Store Page
For more details Visit Community Hub
For latest discussions
If you really, really want to, you can continue to the Greenlight page. Information on this page may be out of date, since all the action has moved to the areas noted above.