Greenlight > Games > Raspina's Workshop
Greenlight is being retired. For more information on how to submit games to steam, refer to this blog post.
This item has been removed from the community because it violates Steam Community & Content Guidelines. It is only visible to you. If you believe your item has been removed by mistake, please contact Steam Support.
This item is incompatible with Greenlight. Please see the instructions page for reasons why this item might not work within Greenlight.
Current visibility: Hidden
This item will only be visible to you, admins, and anyone marked as a creator.
Current visibility: Friends-only
This item will only be visible in searches to you, your friends, and admins.
E.T. Armies
Description Discussions21 Announcements9 Comments962 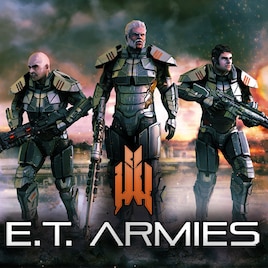 saman.qrfk
Offline
See all 180 collections (some may be hidden)

View E.T. Armies in the store

You can now join the action in the official multiplayer servers, or you can create your own private match for just you and up to 15 friends for a total 16 concurrent players per match. With Deathmatch, Team Deathmatch and Capture the Flag game modes, there is something for everyone.

After a long wait E.T. Armies is now ready to be published ! Apologies for the lack of updates since our IndieDB announcements. We've been working hard on the game and polishing it up, and since many people also asked for multiplayer while we were in Greenlight, we've been working very hard to implement it.
Now, finally we're ready to publish to Steam. We are partnering with Merge Games to bring the game to Steam on 3rd of march 2016. Get in touch on the forums with your thoughts on E.T. Armies as it approaches release !

Read More
Description
Release date: March 03, 2016
E.T. Armies is an action-packed, fast-paced, science-fiction first person shooter. The game takes place in a dystopian future in which Earth’s resources have been depleted. Abandoning the planet seemed to be the only avenue for survival but not all could leave. Those left behind have become united in their struggle. It’s just the beginning for the Forsaken and the start of their devastating plan for vengeance. The Forsaken hungers for supremacy and power in equal measures and war is its lifeblood.

As a Parsis soldier you are charged to resist this new power and defend the fragile landscape against the Forsaken’s ruthless onslaught. Along the way you’ll face more strife than you could have possibly expected, together with your allies you must fight to cleanse the land from the Forsaken’s brutality.

Story
In a distant future, mankind has located and inhabited new planets. As the new world begins to expand, humanity’s hunger for power and new resources intensifies. Although many new planets are found, our mother Earth is fallen and has been left uninhabitable. Abandoning our homeland seemed to be the only avenue for survival. However, not all can leave. Those left behind became united and formed a nation to fight for their survival on the doomed planet. But it’s all just a beginning for these forsaken, a beginning to their devastating plan for vengeance. A massive onslaught that must be stopped, by all means necessary.

About Raspina
Raspina Studio is a team of enthusiasm gathered around with the main goal of creating high quality and polished games. The team has been established in 2011 and has developed games for PC and mobile devices. Raspina is planning to direct its focus on PC and console games in future.
For more information please visit {LINK REMOVED}www.raspinastudio.com
< >
962 Comments

E.T. Armies has been Greenlit and is now listed in the Steam store. For the latest information, purchase options, and discussions for E.T. Armies, please see it on the Steam Store or in the Steam Community.
Visit Store Page
For more details Visit Community Hub
For latest discussions
If you really, really want to, you can continue to the Greenlight page. Information on this page may be out of date, since all the action has moved to the areas noted above.