Greenlight > Games > Bugbear's Workshop
Greenlight is being retired. For more information on how to submit games to steam, refer to this blog post.
This item has been removed from the community because it violates Steam Community & Content Guidelines. It is only visible to you. If you believe your item has been removed by mistake, please contact Steam Support.
This item is incompatible with Greenlight. Please see the instructions page for reasons why this item might not work within Greenlight.
Current visibility: Hidden
This item will only be visible to you, admins, and anyone marked as a creator.
Current visibility: Friends-only
This item will only be visible in searches to you, your friends, and admins.
Bugbear Entertainment's Next Car Game
Description Discussions86 Announcements9 Comments2415 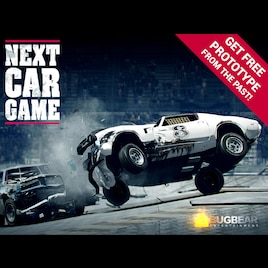 Bugbear
Offline
See all 406 collections (some may be hidden)
Recent Announcements View All (9)
Early Access doubled sales over Christmas week, free demo downloaded over 50,000 times!
January 4, 2014 - Bugbear
SUCCESS OVER CHRISTMAS
Holiday season is an exciting time for everyone, but for us at Bugbear it was even more so. Only a couple of days before Christmas, we released the very first Early Access version of our Next Car Game, with the aim of giving our faithful fans something to enjoy during the holidays.

It was the first time we were going to show the game to everyone, and we were very anxious to hear the feedback, but the game took the Internet by storm: the first Early Access release doubled the sales of the title during the Christmas week! Last autumn, we had a stretch of bad luck with our Kickstarter campaign, and it didn’t reach the goal we were aiming for. Even so, we didn’t lose our faith in the game and wanted to get it in the hands of the players as soon as possible. And thanks to our great supporters, we really couldn’t have asked for a better Christmas present – much to our surprise, we reached and actually topped our original campaign funding goal in just week! Not only that, but the free demo we released a couple of days later has been downloaded over 50,000 times, and the gameplay video posted on the popular Nerd³ Youtube channel has already over 500,000 views.

All this is of course a testament to how awesome crowd of supporters we are fortunate enough to have. Although our game is still at a pretty early stage, and as such, contains many missing features and numerous bugs, the players have loved what we already got and the response has been overwhelmingly positive. We’ve already received a plenty of smart suggestions for future improvements, some of which will of course find their way into the final game. During the coming months we’re going to give the game a lot of polish as well as implement new exciting features, and our Early Access supporters have an opportunity to experience the game as it develops and get involved in the development!

BEHIND THE SCENES: JUNKYARD VISIT
Quite recently we did a little field trip to a local junkyard to take a look at what extreme car damage really means. We learned a lot, and the guys at the junkyard got to have some real fun by showing us how to give a car some real punishment. So as far as we’re concerned everybody won! If you still haven’t had a chance to check out the video from our field day, check it out!

PRE-ORDER NOW TO GET EARLY ACCESS!
Early Access is being sold through our own website for now, and all our pre-order supporters get to download the game through Steam immediately. The first release contains two playable cars and three tracks, showcasing both track racing and demolition derby action with 24 cars.

By pre-ordering the game now, not only you get to play right away but also have a chance to get a lot of cool exclusive extras like technology sneak peek, special supporter car and your name in the game – and what’s best, you get all this for a special, reduced price!

FREE SNEAK PEEK
Don’t forget that the free version of Next Car Game technology sneak peek is still available through our website! With already over 50.000 downloads and counting, countless players around the world are already wreaking havoc in our destructive sandbox! Make sure you’re not left behind!

The free version contains a limited version of the playground scene that we use internally to test various features like car damage and environment destruction. What’s best, by pre-ordering Next Car Game you get access to the full version of the sneak peek with a lot additional cool content for the demo like physics cannon with explosive missiles, new destructive machinery, more spectacular stunts and a ton of dynamic stuff to blow up!


ALL THE BEST FOR 2014 AND THANKS FOR YOUR SUPPORT!

Ladies and gentlemen, start your engines! The time we’ve all been waiting for is finally here: we’re very pleased to announce that we have just released the very first Early Access version of our Next Car Game.

GET EARLY ACCESS
The game is being sold exclusively through our site for now, and thanks to the great guys over at Steam all our pre-order supporters can download the game through Steam. By pre-ordering the game now, not only you get to play right away but also have a chance to get a lot of cool exclusive extras like technology sneak peek 2.0, special supporter car and your name in the game – and what’s best, get all this in a special price!

The first release contains two playable cars and three tracks, showcasing both white-knuckle track racing and explosive demolition derby action with 24 cars that will give you some taste of things to come. However, please be aware that the Early Access phase is meant to give you a chance to experience the game as it progresses through its development cycle, and the game is still at a pretty early stage. As such, it does have a truckload of missing features, nasty bugs, choppy performance and can generally just leave a sour taste in your mouth. It probably doesn't run any better than any old junk car bought off the street, actually. And what’s even worse, there’s not going to be an update until sometime in January! If you’re expecting a complete game, please take your money somewhere else.

But if you’re willing to take the plunge and buy that beater, now you’re chance to finally experience the game (the few parts that have been implemented that actually work, that is) first-hand during the holidays. During the coming months we’re going to give the game a lot of polish as well as implement many new exciting features, and all our Early Access supporters have a opportunity to get involved in the development of the title and tell us what you want.

FREE SNEAK PEEK DEMO
Since it’s a holiday season we don’t want anyone to feel left behind, and as a special gift we’re also releasing a free version of our technology sneak peek for everyone to enjoy! The free version contains a limited version of the playground scene that we use internally to test various features like car damage and environment destruction. By pre-ordering Next Car Game, you can unlock a lot of new additional cool content like physics cannon with missiles, new destructive machinery, more spectacular stunts and a ton of dynamic stuff to blow up!

SIGN UP NOW FOR OUR NEWSLETTER AND GET A FREE TECHNOLOGY DEMO!

http://www.nextcargame.com
Read More
Description
Love Wrecking Cars?
Did you love the over-the-top, reckless racing action of the FlatOut series? Or the ferocious wrecking fests of the Destruction Derby games? We did too!

What if you could somehow relive those glorious moments, mixed with some serious Street Rod inspired vehicle upgrading and spiced up with fierce online races where players can battle it out with their tricked out bangers?

Now THAT would be something.

Over the years, you’ve been asking the same thing over and again: When are you going to get back to your roots, and create another high-octane racing game that would capture the spirit of over-the-top action and reckless racing as the legendary games of the past?

We’ve heard you, and we now have some pretty exciting news for you. Our next racing game is going to bring those unforgettable moments up-to-date, and the best part of it all is that we want to make it with YOU!

Why Should You Care?
1. Unique Racing Experience.
First and foremost, we’re building a FUN racing game with PERSONALITY. It’s all about the stuff that really matters: varied tracks, cool cars, and the defining once-in-the-lifetime moments that can be achieved only with true-to-life physics simulation.

If you’re familiar with the original FlatOut experience, you already know what we’re aiming at: exhilarating racing action with sophisticated physics and damage modeling, only this time we’re upping the ante on almost every front. This is the game we envisioned way back in the early 2000s, only re-imagined for today’s technology and gaming standards.

Oh, and we’ve got full-blown, straight-up demolition derbies, too, to go with your full contact racing.

2. Awesome Cars.
The cars are old, cheap, banged up, patched together, rusty… just awesome! In short, our cars ooze with STYLE! You won’t find anything like them in other racing games.

We’ve got variety: everyone loves the old American heavy-hitters from the muscle car era, but we’re not neglecting the fun little European and Asian cars from the long-gone decades either. The best part is that you’ll be taking them apart and building them back up again in your garage. Need more horsepower on a budget? No problem, scour the classifieds for a bargain supercharger – just remember that a cheap bargain find might not withstand too much punishment!

The career is as much about your garage and your project cars as it is about racing.

3. Exciting Engine.
Our in-house ROMU engine is a beast. A hell-bent beast that’s precision-engineered for high-speed, breakneck racing. You could not create this experience with just any engine. The ROMU engine is all about heavy metal going way too fast and crashing into stuff.

At Bugbear we’re all about putting you in the driver’s seat. That’s why our engine is simulating everything, to give you great feedback on what your car is doing. You’ll feel the little bumps on the track, the weight of your car when you go over them – and most certainly you’ll feel it when you’re being dealt some damage, only that getting HURT has never before felt so good!

We can’t wait to show you what we can do with today’s hardware. Now we have fully dynamic visual car damage (no predefined damage models!), and the environments are more destructible than ever before.

Essentially, we can now put a ton of flying metal and dirt in the air at any given time, and we certainly will!

It’s a motorsport with attitude.

[/b]Who We Are?[/b]
Bugbear Entertainment is a game studio specializing in action driving. We’ve been making car games for thirteen years, starting with Rally Trophy (2001, PC). With over a decade of development under its belt, Bugbear Entertainment has successfully redefined the genre of action racing.

Join and support us in making the ultimate full-contact racing game!