Greenlight > Games > Nerd Monkeys's Workshop
Greenlight is being retired. For more information on how to submit games to steam, refer to this blog post.
This item has been removed from the community because it violates Steam Community & Content Guidelines. It is only visible to you. If you believe your item has been removed by mistake, please contact Steam Support.
This item is incompatible with Greenlight. Please see the instructions page for reasons why this item might not work within Greenlight.
Current visibility: Hidden
This item will only be visible to you, admins, and anyone marked as a creator.
Current visibility: Friends-only
This item will only be visible in searches to you, your friends, and admins.
Detective Case and Clown Bot in: Murder in the Hotel Lisbon
Description Discussions10 Announcements8 Comments316 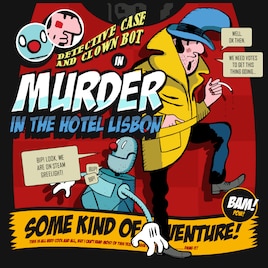 Luis Bacharel
Offline
See all 48 collections (some may be hidden)

View Detective Case and Clown Bot in: Murder in the Hotel Lisbon in the store

Store page
Recent Announcements View All (8)
17th of July on Steam!
June 6, 2014 - Pina
Murder in the Hotel Lisbon arrives on Steam on the 17th of July!
Steam - http://Steam Page

Improved and with extra features, the Steam version also contains the usual achievements and trading cards. Awesome! Everyone who bought the game before on our website or through Desura will automatically get a Steam key a few days before launch.

But for those of you who can't wait, you can buy the game right now on our website or Desura.
Thanks again to everyone who voted!

Website - http://caseandbot.com
Desura - http://desura.com
Read More
Free episode! (demo)
March 26, 2014 - Nerd Monkeys
We just launched a free episode! BAM!
Detective Case and Clown Bot are hired to solve a very small case.
A group of academics want Justin Case to find them the freshman that ran away from them.

Unfortunately this free episode is only available in Portuguese.
It is however, still a nice way to check out the game without having to buy it first.
Read More
Description
Release date: 5th December 2013

Detective Case and Clown Bot in: Murder in the Hotel Lisbon
Murder in the Hotel Lisbon is a videogame for Windows, Mac and Linux.
It is inspired by the classic point and click adventures from the 80’s and 90’s. It adopts these eras characteristically design and it is built using only the pixel art technique. The game itself runs at a native resolution of 256x192, the same resolution used by the old ZX Spectrum 48k and most recently by the Nintendo DS.

Synopsys:
A strange murder has occurred in the Hotel Lisbon, a man committed suicide with 14 stabs to the back while at the same time he peacefully drank his coffee.
This case with contradictory facts was too complex for Policeman Garcia to solve, so he decided to hire the only detective duo in town capable of solving it: the mythical Detective Case and the unmistakable Clown Bot.
Together, they will solve a network of love relations so complex and so intricate, that it would take at least 14 clairvoyants, 5 apocalyptic sect prophets who can predict the end of the world and 3 of those ♥♥♥♥♥♥♥ that can read the palm of your hand just to guess the final outcome.

Characters:
With the mythical Detective Case, also known as the world worst detective, a man so rough and rude that his witnesses would rather be run over by a slow moving freight train than to be questioned by him.
And the hilarious Clown Bot who, although he works as a Detective Case’s sidekick, he hopes in reality that one day he will get a job as a circus clown. Unfortunately, and no matter how many applications he sends, no circus will ever accept a clown that is afraid of children. He never sleeps, so besides working by day as a sidekick, he also works by night as a stand-up comedian in a local bar. People say that he is a joke machine.