Greenlight > Games > Flix Interactive's Workshop
Greenlight is being retired. For more information on how to submit games to steam, refer to this blog post.
This item has been removed from the community because it violates Steam Community & Content Guidelines. It is only visible to you. If you believe your item has been removed by mistake, please contact Steam Support.
This item is incompatible with Greenlight. Please see the instructions page for reasons why this item might not work within Greenlight.
Current visibility: Hidden
This item will only be visible to you, admins, and anyone marked as a creator.
Current visibility: Friends-only
This item will only be visible in searches to you, your friends, and admins.
Eden Star: Pre-alpha
Description Discussions45 Announcements33 Comments1049 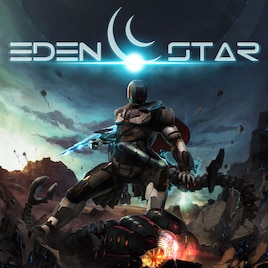 We are live and ready to download via Steam!

Also all the people who already bought the game through our Humble Widget will receive Steam Keys in the coming days.

We've had some amazing feedback off our Humble backers so far. We can only thank you for your patience and support over the last year. It really has been humbling, pun very much intended, to hear all your feedback and we are taking it all in board as we look to the future of Eden Star.

If you wish to purchase the game go to our store page on steam here:

You can read more information about our Early Access plans and builds here:

Also if you want to keep up to date with our road map for the future, you can head on over to our Trello board to see ,and talk about, all the shiny features coming in the future here:

We've also released our launch trailer, if you missed it, or perhaps just fancy a cheeky second watch. You can watch it here:

Our focus will now be firmly set on making the game as brilliant as possible, realising the full design, and taking on board all of the communities input and feedback throughout the entirety of the Early Access process.

So, with the build now ready, we hope you enjoy it, albeit in an early state! Now it would seem there is only one question Pioneer. How long can you survive on Pharus 7?

You can now join the discussion on Steam by following the below links. Thank you for your support!

Welcome Pioneers (The faithful amazing people that you are!),

Today we are delighted to announce our target release date for the Eden Star Pre-Alpha build v0.0.1.

On Friday January 30th the build will be uploaded to Steam.

To all of you that have supported us to date via Humble; the purchase widget on the Eden Star website has been temporarily removed from the site and we have an email going out to you early next week (we just need to update a few item descriptions this weekend, then compile, test and upload the build to Humble!) informing you that you will now have exclusive access to the build prior to the 30th.

In addition, we will also be sending our early backers an “Art of Eden Star v0.1″ PDF book to download as a small thank you for being the first to believe in the project, this will also be distributed via Humble.

The team at the Flix have been hard at work these past few weeks, fixing issues, polishing the basic level and stomping on those pesky bugs.

So, a massive thanks for your time, support and patience. Stay awesome!

If you’ve got anything you want to say about today’s post, or anything else, why not also post on the forums.

Check out the full post by clicking HERE along with a sneak peek video of the world of Pharus 7![www.edenstargame.com]

Thanks again for your support and watch out this week coming for the launch trailer and details!

We are live and ready to download via Steam!

If you wish to purchase the game go to our store page on steam here:

Also if you want to keep up to date with our road map:

THE YEAR IS 2685
In a world raised from the ashes of extinction, humanity is rescued from the brink by the discovery of a unique mineral; Teslinium, heralding great leaps in scientific understanding and the dawn of interstellar travel.

The first Pioneers are drafted by the remaining Citadel Nations to spearhead the colonisation of three small worlds in order to form sustainable mineral supply routes with the goal of restoring Earth’s biosphere. Over time, small deposits of Teslinium are found and successful trade unlocks new economies through the excavation of alien minerals. Humanity flourishes.

Ten years after the first colonisation the second frontier sees the fringe expand and colonists settle along the outer rim. With little warning, transmissions are lost with the small outpost stationed on Pharus 7.

The frontier now belongs to the hardened Pioneers of True Hope, Fair Dawn and Eden Star...

You are an augmented Pioneer stationed on the Frontier Class Migration Vessel; Eden Star, tasked with the successful reclamation of Pharus 7.


Eden Star is an immersive first-person, survival creation game that blends innovative physics based combat, destructible environments, and freeform construction with the exploration of a hostile alien world.

Gather mineral resources from the world of Pharus 7 in order to fund the expansion and development of unique and powerful technologies as you create, destroy and manipulate the world around you.

ULTRA-INTERACTIVE ENVIRONMENTS
Eden Star rewards ingenuity and presents both organic and environmental challenges that can be resolved and traversed in numerous ways. Using the RMD (Remote Manipulation Device) or “Tool” you are able to manipulate your surroundings in a real time physics environment; there are no pre-scripted answers, so adaptability is the key to success.

FREE FLOWING COMBAT
Combine different RMD actions, attacks and abilities in order to survive against enemies and environmental hazards. A simple, but fluid movement system gives you freedom to move athletically across surfaces with ease while you grab, smash and blast enemies around the world and through the destructible environment.

GATHER RESOURCES
In addition to defeating enemies, you can also dematerialise objects, minerals and structures in order to gain resources. Use the devastating sustained blast or simply grab something heavy and smash it into a target to break it into smaller chunks and dematerialise it more rapidly.

BUILD AND DEFEND YOUR WORLD
If you die in combat you will be reconstructed back by the Eden Kit. Naturally you must ensure that the Eden Kit remains intact, protecting it from waves of enemies that are drawn to the Teslinium energy contained within.

Place gathered minerals within your Eden Kit to convert it into build-resources, or use it to make your attacks more powerful. How you balance your resources is up to you.

DAMAGE AND DEFORMATION
Watch as objects, enemies and environments deform and take damage in real time using the latest PhysX and Apex destruction. Destroy and recreate your surroundings at will; the environment is yours to manipulate, just watch out for the indigenous lifeforms…
< >
1,049 Comments

Can't say thank you enough for the support!