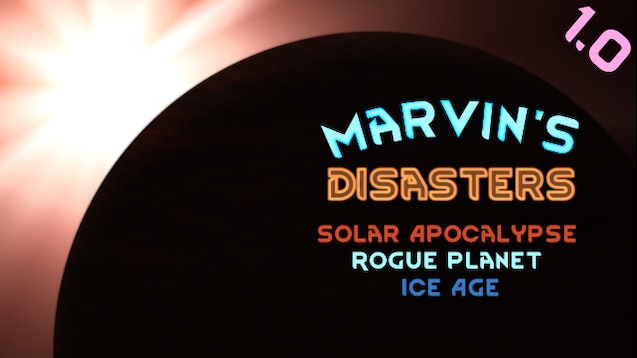 Marvin
Online
See all 201 collections (some may be hidden)

This item has been added to your Subscriptions. Some games will require you to relaunch them before the item will be downloaded.
Description
This mod allows any game condition which has a temperature offset to affect conditions on the world map. It also comes with three new game conditions - Solar Apocalypse, Rogue Planet and Ice Age. There are also three starting scenarios which use these new game conditions, but you can also use them in your own scenarios.

Some game conditions may require you to build a spaceship to escape the searing heat or freezing cold.

You may need to have the appropriate insulation to survive if you send out caravans.

This game condition slowly increases the temperature over the course of many years. At first this increase is quite small, but with each passing year the rise becomes more evident.

In addition, fewer animals will migrate into your part of the world, and plants will become scarce.

As even more time passes, your cooling systems will be unable to sink heat fast enough and this means you will be unable to grow crops or keep animals even indoors. Plants which are outside in the searing heat will die.

Through misfortune, this rimworld has broken from its orbit and is steadily escaping its parent star.

This game condition decreases the temperature over the course of many years. Like Solar Apocalypse, the decrease starts out small but gets bigger with each passing year.

Again, plant and animal density will decrease as the temperature gets lower.

Because of the nature of the map condition, less light will reach the surface and you will get less power from solar panels.

A climate shift on this rimworld has led to much colder temperatures globally. This winter will never cease and, as the temperature drops, fewer and fewer animals and plants will be able to endure the cold. Additionally, less light reaches the surface, making solar panels less effective.

Don't comment asking when the mod will update.
Comments regarding mod updates have become a nuisance. I can understand that people get excited and post before they think or read, but I have social media, go and check there to see if I have posted about RimWorld. You will be saving me a lot of time.

If you'd like to see the mod in action, I prepared an introductory video for you: https://www.twitch.tv/videos/333515754

If you like this mod, why not consider looking at some of my other mods?

Finally, a big thank you to everyone who has given feedback and supported my RImWorld mods. :)
Popular Discussions View All (1)

Jarlent Sep 2 @ 10:49pm
Probably my favorite mod of all time for Rimworld

Thank you for releasing the source.
Updated 1.1 with some fixes.
Please let me know if there is a problem

NHAOKU Feb 23 @ 8:21am
Having an issue with the mod, especifically with the ice age scenario, i do have a lot of mods running with Disasters so it could simply be some incompatibility but, no matter how many heaters i have on, periodically the temperature just drops to -50°C instantly, killing all my crops and eventually killing the whole colony

BrenTenkage Feb 2 @ 10:58am
well time to do my frost punk playthrough LOL

Ghostipedia Jan 21 @ 1:30am
Is there any way to force one of these events on an already existing save, say through debug?
Looked through the incidents list and I wasn't able to find a trigger for it.

CaptainSnafu Jan 15 @ 3:14am
hi, have made chinese translation
https://steamcommunity.com/sharedfiles/filedetails/?id=1969553833

Like I said, though, my license is very permissive. You can go ahead and get started on your own fork without my input.

dereferenced null pointer Oct 21, 2019 @ 6:13pm
I have a preference for open source projects source code being accessible in the event that something catastrophic were to come to fruition and would use git as a version control and most likely GitHub for a means of distribution on an ad-free environment. I did notice that you don't use GitHub but instead use your own hosted site that you also blog on. Unfortunately, I don't have the means to do something like that to restrict the publication with a button that literally designed to do that ("Fork").
I'm not as active as you are about checking these things and github at least sends me a nice email when I get a bug because I wouldn't check Steam or the forums for complaints since it would eat away all my time.

Feel free to add me on Steam so we can continue this conversation as needed without cluttering up your comment section.

Marvin  [author] Oct 20, 2019 @ 10:26pm
The license for my mods is very permissive. About the only thing I don't allow is re-uploading, and that's mainly because there's already a place to get a direct download. I would insist that a new maintainer have a similar arrangement for downloading outside of Steam Workshop so that users have an ad-free experience when they download a mod.

Marvin  [author] Oct 20, 2019 @ 10:16pm
A few people seem to not enjoy the rapid ageing part of Sometimes Raid Go Wrong. I tried explaining that it's possible to treat it, and I pointed out that you can even adjust the mod so that rapid ageing is no longer a possible outcome, but people never seem to be satisfied until they've got more mod settings that they can turn off than actual mod content.

Then there's the scrapers, who pop by every now and then to upload all the mods to ModsBase even though I'm pretty sure I didn't give them permission to do that. Fortunately it's become easier to flag those for removal.
< >