Greenlight > Games > WhiteMoon Dreams's Workshop
Greenlight is being retired. For more information on how to submit games to steam, refer to this blog post.
This item has been removed from the community because it violates Steam Community & Content Guidelines. It is only visible to you. If you believe your item has been removed by mistake, please contact Steam Support.
This item is incompatible with Greenlight. Please see the instructions page for reasons why this item might not work within Greenlight.
Current visibility: Hidden
This item will only be visible to you, admins, and anyone marked as a creator.
Current visibility: Friends-only
This item will only be visible in searches to you, your friends, and admins.
WARMACHINE: Tactics
Description Discussions25 Announcements12 Comments1186 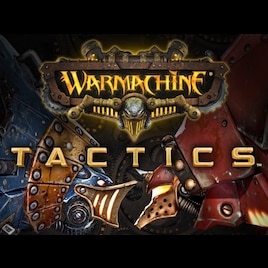 View WARMACHINE: Tactics in the store

The game is available on Early Acces! Jump in now and for $65, you get the Mercenaries faction and and one extra Warcaster and Warjack per core faction when we release them later this year! 20 additional units to do battle with!

If you're a backer in the beta tier for our Kickstarter, your turn to play starts on June 24th, 2014! See you in the game!
Check out the announcement here!

Read More
Description
Release date: August 2014
Check out the links section to support us on Kickstarter!

Wade into battle with a squad of skilled warriors at your command, a cadre of ten-ton robots that obey your every thought, and the power of a thunderstorm in the palm of your hand…

WARMACHINE: Tactics is the game of dynamic turn-based tactical combat for PC and Mac, set in the steam-powered world of the award-winning WARMACHINE tabletop game.

THE WORLD
Rivalries as old as man steep the Iron Kingdoms in a tradition of incessant war, forging in its violent fires heroes of unimaginable power and the weapons they alone can wield. This is a land dominated by iron giants and their heroic human controllers, a fantastic realm marching to the progressive cadence of an industrial revolution, where magic and technology have found common ground in the form of a new science, called “mechanika.”

Dominating the field of battle are the WARCASTERS, rare individuals who have mastered both sorcerous magic and martial combat and who possess the singular ability to command the mightiest warriors of the Iron Kingdoms—ten-ton, flame-belching, lead-spewing machines of destruction called WARJACKS.

Warjacks are the warcasters’ greatest weapons—titanic, steam-powered automatons with arcane brains, magically linked to their warcaster controllers and capable of executing their every devastating order. Together, a warcaster and his warjacks possess the power of a small army. When leading a military force, they are unstoppable.

The wars that engulf the Iron Kingdoms are waged by four powerful nations: imperialistic and conquest-driven Khador; heroic Cygnar, with its cutting-edge technology; the fanatical Protectorate of Menoth; and the undead “Nightmare Empire” of Cryx. Bolstering the forces of these factions are countless mercenaries, drawn from all corners of the continent to profit from the endless conflicts. Other nations beyond the Iron Kingdoms have also entered the fray—ancient and inhuman races, some who ally with the human factions and others who would see humanity destroyed.

THE GAME
WARMACHINE: Tactics is a squad-level, turn-based tactics game featuring both a single-player campaign and online synchronous and asynchronous head-to-head multiplayer options.
Whether playing the campaign or multiplayer, the command and management of your squad is key. Not only will you make defining choices about the warcaster, warjacks, and warriors that comprise your squad, but you will also utilize strong tactical direction of their strengths and abilities in battle as well as astute guidance for how they evolve over time.

CONSTRUCTING AND COMMANDING YOUR SQUAD
WARMACHINE: Tactics is designed around the philosophy of synergy between the members of a squad. Every unit is part of the whole and can interact with other units for greater effect. Similar to the concept of creating ability combos in a trading card game, units in WARMACHINE: Tactics can combine effects and abilities that support each other’s efforts and increase one another’s effectiveness. Careful and creative selection of a squad’s warcaster, warjacks, and warriors is essential to an effective strategy.

Then once your squad takes to the field of battle, your tactical command of their actions will govern their success. Will your squad advance cautiously, utilizing cover and outmaneuvering the enemy, or will they charge furiously into melee combat where brute force and resilience will win the day?

WARCASTERS
In WARMACHINE: Tactics, your squad is led by a warcaster, one of many unique characters drawn from a colorful pantheon that makes up the epic cast of this setting. Each warcaster possesses an arsenal of weapons tailored to his personal fighting style as well as a unique combination of spells and skills. These include a defining arcane feat that, when used at the right time, can turn the tide of battle.
Warcasters possess a replenishing reservoir of magical energy, called focus, which endows them with their superhuman abilities. Focus is used to cast spells, charge the protective fields of their specially created battle armor, and increase the effectiveness of their combat abilities.
Every warcaster interacts with his or her warjacks and warriors differently. One warcaster may promote aggressive strategies and bolster her squad’s performance in melee combat, while another warcaster may provide greater defense and longevity to his squad, encouraging a more methodical approach to victory. The interchangeability of warcasters in WARMACHINE: Tactics provides nearly infinite replayability and ensures that no two game experiences are ever the same.

WARJACKS
The spearhead of the WARMACHINE fighting force is the warjack. Outfitted with an array of wicked weaponry, these imposing constructs of steel and iron are brought to life through a fusion of steam power and magic and controlled with deadly precision by the warcaster.
A warcaster is in constant telepathic contact with her warjacks and can channel her focus through a warjack to boost the machine’s combat abilities and enable it to execute devastating power attacks.
The relationship between warcasters and their warjacks is as close as the kinship between any brothers in arms. Over time, a warjack gains experience and may bond with its warcaster, taking on unique personality characteristics and developing new aptitudes.

WARRIORS
Fleshing out the squad in WARMACHINE: Tactics are the warriors. Encompassing a wide range of disciplines and roles, warriors are selected for the fighting capability and supporting tactics they add to your squad based on how you want the force to operate on the battlefield.
Squads in WARMACHINE: Tactics are small, elite units, and the warriors that comprise them are all heroes in their own right. The warriors bring with them a gallery of incredible weapons and abilities that can make a squad perform efficiently and effectively in any situation, from rapid assaults to stealthy hit-and-run maneuvers and everything in between.

SINGLE PLAYER CAMPAIGNS
Each campaign will focus on a single novice warcaster character and allow you to play through the formative experience that evolves that character into a full-fledged warcaster, also playable in multiplayer.

WARMACHINE: Tactics will ship with the “No Man’s Land” campaign, featuring Cygnar’s Lt. Allison Jakes, a young journeyman warcaster trained as a duelist who is unexpectedly thrust into a position of great responsibility and leadership before she is ready. Under your command, Lt. Jakes will rise to the occasion in the face of horror and adversity in this harrowing story that will define her character forever in the ongoing saga of WARMACHINE.

Future campaigns will explore all the factions of WARMACHINE and feature a cast of characters uniquely designed for both the video game and the tabletop.

MULTIPLAYER
One of the most exciting aspects of WARMACHINE: Tactics is being able to play against your friends no matter where you are or what time it is. Online multiplayer will support both synchronous and asynchronous play, so you can compete head-to-head against a live opponent on the other side of the world, or you can play the asynchronous “play-by-mail” mode, which allows both players to take turns at their leisure. If you don’t have a friend available and still want to get your battle on, you’ll be able to find an opponent with automatic matchmaking. And WARMACHINE: Tactics will offer casual, ranked, and tournament play to suit the style of every player.
< >
1,186 Comments

RoastinCoffee Jun 27, 2014 @ 3:12pm
The youtube vids I have seen show the units activating separately (move/attack), not all together as the tabletop game. They also allow you to see who you can attack (melee or ranged) before moving...these are the only things so far i can see that are not like the tabletop version.

WARMACHINE: Tactics has been Greenlit and is now listed in the Steam store. For the latest information, purchase options, and discussions for WARMACHINE: Tactics, please see it on the Steam Store or in the Steam Community.
Visit Store Page
For more details Visit Community Hub
For latest discussions
If you really, really want to, you can continue to the Greenlight page. Information on this page may be out of date, since all the action has moved to the areas noted above.