Greenlight > Games > The Fun Pimp's Workshop
Greenlight is being retired. For more information on how to submit games to steam, refer to this blog post.
This item has been removed from the community because it violates Steam Community & Content Guidelines. It is only visible to you. If you believe your item has been removed by mistake, please contact Steam Support.
This item is incompatible with Greenlight. Please see the instructions page for reasons why this item might not work within Greenlight.
Current visibility: Hidden
This item will only be visible to you, admins, and anyone marked as a creator.
Current visibility: Friends-only
This item will only be visible in searches to you, your friends, and admins.
7 Days to Die - Zombie Survival Game
Description Discussions385 Announcements22 Comments8469 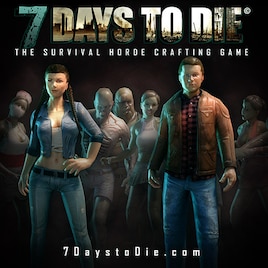 View 7 Days to Die - Zombie Survival Game in the store

Hey Survivalist,
We want to thank all of you have bought the game in its first day of Steam sales. We’ve and an overwhelming positive response from the community.

We are sorry for any issues you have had with our Alpha 5 Steam release. We thank you for your patience and have quick fix that should auto-update in your Steam Client for you now that includes the following fixes:

Wazzup Survivalist,
Folks it’s Friday the 13th but the Pimps are not going to let a silly little superstition dampen their holiday mood. So in the spirit of Christmas we’re releasing a new Alpha 5 version of the game on Steam and we’re running a 15% discount on both Steam and on our own Buy Page through January 2nd. The game sells regularly for $35.00 so you have a couple weeks to grab it for the new low sale price of $29.75.

So why don’t you head on over to our Buy Page [7daystodie.com] or our brand new Steam Store Page to pick up your sale priced copy now!

We’ve also left a little something in the stocking for our existing customers creating a new customer
Get my Steam Key Page [7daystodie.com] where you can login to our customer portal and convert your 7 Days to Die key to a Steam key.

And for your detailed oriented folks here is a complete list of new Alpha 5 Release Notes. So check it out now funk soul brother!

In the near future where the a third world war leaves the Earth in ruins but the worst was yet to come. Nobody knows for sure if it was the radiation, the biochemical weapons or an act of god but an unknown virus soon transforms the surviving humans into an army of the animated dead, acting as a single-minded being.

You play a survivor trapped in the savage zombie infested world of Navezgane County Arizona one of the last true Eden’s on Earth. Ironically Navezgane means “Killer of Monsters” to the Apache who have inhabited the land for centuries, and that’s pretty much what you’ll do as you fight to survive and search for the truth behind what really happened.

Basic Survival - Scavenge the world for food and water maintaining and boosting health, food, stamina and hydration levels. Grow and harvest a variety of crops and hunt, track or domesticate a multitude of wildlife to live off the land.

Day and Night Game Play - Spend the day looting, mining, crafting and building up your forts defenses as light slows down and weakens the zombies. Hold up somewhere safe at night as the lunar cycle speeds up and strengthens the zombies.

Relentless and Special Enemies - Enemies will claw, jump, climb and break their way through the world in order to get to you. They can see, smell and hear the player and can work in a group. And watch out for the unique special infected enemies like the Acid Puking Hulk whose acidic vomit can melt blocks.

Block Physics and Stability - Our Physics System simulates real-time structural integrity, durability and mass. Blocks don’t float in the air nor can you build an unsound unsupported structure. Build it right or watch it come crumbling down. Weak blocks can even fall from the weight of the player or zombies.

Stealth and Distraction System - Crouch and sneak your way past enemies or throw objects to distract them. Find or craft sight, sound or smell deterrents and attractor recipes and items to exploit the sight, hearing or smell of the zombies to throw them off track.

Solo, Cooperative and Multiplayer - Play solo, coop or multiplayer in our unique Zombie Nomad Mode be a human, a bandit or a zombie for a no rules experience. Watch the leader boards and fight to be the Big Clan of the Wasteland or the Duke of Navezgane.

Creative User Tools - Build your own worlds and play them with friends using the Creative Mode Tools featuring hundreds of block shapes, prefabs and random generation tools. Create dedicated servers with your own unique game rules and settings.
Popular Discussions View All (385)

7 Days to Die - Zombie Survival Game has been Greenlit and is now listed in the Steam store. For the latest information, purchase options, and discussions for 7 Days to Die - Zombie Survival Game, please see it on the Steam Store or in the Steam Community.
Visit Store Page
For more details Visit Community Hub
For latest discussions
If you really, really want to, you can continue to the Greenlight page. Information on this page may be out of date, since all the action has moved to the areas noted above.