Greenlight > Games > Insano's Workshop
Greenlight is being retired. For more information on how to submit games to steam, refer to this blog post.
This item has been removed from the community because it violates Steam Community & Content Guidelines. It is only visible to you. If you believe your item has been removed by mistake, please contact Steam Support.
This item is incompatible with Greenlight. Please see the instructions page for reasons why this item might not work within Greenlight.
Current visibility: Hidden
This item will only be visible to you, admins, and anyone marked as a creator.
Current visibility: Friends-only
This item will only be visible in searches to you, your friends, and admins.
NEED FOR MADNESS
Description Discussions7 Announcements2 Comments372 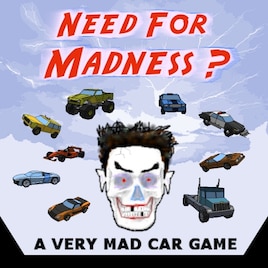 Insano
Offline
See all 30 collections (some may be hidden)

View NEED FOR MADNESS in the store

Hello to all!
Thanks for everyone who voted for the game, we have just released the game on Steam => release date 26/2/2015.
Enjoy the madness the latest Need for Madness which includes a car maker, a stage maker and mega multiplayer action!!

Thank you all for all the support and votes we've gotten so far!

If you don't know, you can download or play the game right now at: http://www.needformadness.com

Read More
Description
Release date: Beta Released
Need for Madness is a very mad car racing and crashing game where you perform stunts to power your car and win by either racing (finishing in first place) or wasting the other cars!
WARNING: This game is literally mad, crazy, cuckoo...

The game can be downloaded and played at: http://www.needformadness.com

The single-player version of the game is available for free download!
The full version that has the multi-player requires purchasing account registration to be downloaded.
The multi-player can be tried by playing the game online (requires Java installation).
Play the multiplayer here[multiplayer.needformadness.com].

The single-player consists of an NFM 1 mode and an NFM 2 mode of play.
In each mode your goal is to complete stages to unlock newer stages and with every two stages unlocked a new car is unlocked as well.
It is recommended to start by playing NFM 1 first because it’s easier, see if you can unlock all the cars and stages! Then try to complete NFM 2.

And then if you think your NFM skills are good enough, try the multi-player game, that’s where all the action is really at!

Car Maker - Designing Creating Cars
You get to design cars completely from scratch by learning to 3D model through drawing blue prints of your car model on paper then coding its coordinates into the Car Maker!
You can also import 3D models from programs like 3D Studio Max or Google SketchUp, if you prefer designing your cars on the computer.
You then define your car’s color, scale, physics and stats in the Car Maker, after that you test drive it in the game to see if it works to your specifications.
Once your car is finished, you can then publish it to the online game, to play with it against other players online in the multi-player!
You can also share your created cars with others players and add other cars created by other players to your account as well!

Stage Maker - Building Stages
Through the Stage Maker you get to design and build stages from scratch by simply attaching stage parts together, it is as easy as building Lego!
You also define the color scheme of your stage, its atmosphere and choose a soundtrack for it.
Test drive your stage and see how driving through it is like.
And then similarly to the Car Maker you can also publish and share your created stages to the game, to play on them against other players online in the multi-player!

The possibilities are limitless in Need for Madness!

The multi-player version of the game is an ongoing project in beta, that is constantly being developed and update with new features and options.
The development plan for the game is huge and we have not yet even completed half of what we have planned for it!
You can follow the game’s latest development updates by visiting its Development Blog here[multiplayer.needformadness.com].


Final words about Need for Madness,
Ever been in a typical racing game, get bored, decide to drive the wrong way and crash the other cars coming your way for fun?
Well in this is game you can do that and actually win!

You do not need to stick to the race track or your car will get ground resistance and loose speed.
You do not need to clear a checkpoint before a specific time or the game stops.
There is no need to follow rules in this game at all!

The physics programming in the game is completely original and has nothing to do with reality!
Glitches where left unfixed intentionally to give it a spicy unique feel (glitches that added value to the gameplay).

The 3D graphics engine is also 100% original, tailor made for the game, giving it its very own simple yet unique look.
It is a software cartoon 3D engine that needs no DirectX or OpenGL (because we make our own basically)!

The game is completely RADICAL and out of the box!
Developed by us,
Radicalplay.com Games, Ltd.[www.radicalplay.com]

luh Jan 5, 2017 @ 5:04pm
Sorry my stupidity, I didn't read that you can actually download it for free, but I need it to be on Steam. Let's Go Gaben, add it quickly for our happiness!

luh Jan 5, 2017 @ 4:56pm
I'm sorry, but i've played this game before, and now can't find the same on the on Steam.
Are you going to make it paid?! Thats fair for you, right, you will gain money for your job, but for the lovers from this game, like me?! (THIS LAST PART IT'S ABOUT THE GAME BE PAID, IF IT AIN'T, GOING TO BE FREE, DON'T CARE ABOUT MY COMMENT).
Love This Game <3

NEED FOR MADNESS has been Greenlit and is now listed in the Steam store. For the latest information, purchase options, and discussions for NEED FOR MADNESS, please see it on the Steam Store or in the Steam Community.
Visit Store Page
For more details Visit Community Hub
For latest discussions
If you really, really want to, you can continue to the Greenlight page. Information on this page may be out of date, since all the action has moved to the areas noted above.