Greenlight > Games > Household Companion's Workshop
Greenlight is being retired. For more information on how to submit games to steam, refer to this blog post.
This item has been removed from the community because it violates Steam Community & Content Guidelines. It is only visible to you. If you believe your item has been removed by mistake, please contact Steam Support.
This item is incompatible with Greenlight. Please see the instructions page for reasons why this item might not work within Greenlight.
Current visibility: Hidden
This item will only be visible to you, admins, and anyone marked as a creator.
Current visibility: Friends-only
This item will only be visible in searches to you, your friends, and admins.
Monochroma
Description Discussions6 Announcements17 Comments972 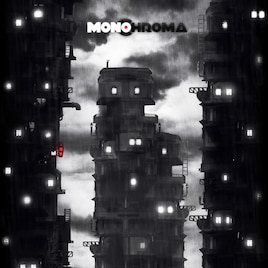 View Monochroma in the store

We have just released the Collector's Edition of the game and to attract some attention we made a big discount to the game. Here is your chance to get the beautiful soundtrack of Monochroma, learn our story of developing Monochroma and receive other great stuff such as the comic book and desktop wallpapers.

Check them out on the store page and share the news.

Monochroma is 50% off during the summer sale. If you haven't played it already here is your chance!

Read More
Description
Release date: December 2013
Monochroma is a cinematic platformer game set in an industrial alchemic world. It's about being a child in dark world, having a little brother, growing up, falling down and solving some other puzzles.

The story takes place in an alternate version of the 1950's where there is a huge company selling robots to the people in a fantastic city. You are playing the big one of two brothers. On the night that your brother gets injured and you are seeking help around, caught in a storm, you find yourself in a warehouse and reveal an awful secret about that company.

Monochroma’s gameplay builds upon the relationship and unspoken sacrifice between two brothers. You can’t run fast or jump high while carrying your brother. Furthermore, you must put your brother down temporarily in order to solve most of the puzzles—but you can only do this where it’s bright. Like most small children, he is afraid of the dark—and you can’t leave him behind.

The game tells its modern dark tale without using any words written or spoken.

Monochroma has been described as Limbo meets Ico . However, Monochroma is much more than a skilled mix of two great games: It offers a deeply visual, intellectual, and emotional experience. Monochroma features realistic locations and puzzles modeled with accurate physics —far from the arbitrary trial-and-error gameplay.

Some words from press and celebrities:

Kellee Santiago – Producer of Journey: 'I can't wait to get lost in the shadows and the rain of Monochroma. Please, please, please bring this to my television!'
Vander Caballero – Creative Director of Papo and Yo: 'An astonishing game that challenge even the top indie developers from the west'
Anthony Gallegos - IGN: 'Art style and art direction is fantastic'
Tim Turi – Game Informer: 'I constantly wanted to know what other dangerous situation was around the every corner of Monochroma.'

Play our demo and decide if Monochroma deserves your support as well.
{LINK REMOVED}http://www.monochromagame.com/Monochroma/redirectdownloaddemo.html
< >
972 Comments

Monochroma has been Greenlit and is now listed in the Steam store. For the latest information, purchase options, and discussions for Monochroma, please see it on the Steam Store or in the Steam Community.
Visit Store Page
For more details Visit Community Hub
For latest discussions
If you really, really want to, you can continue to the Greenlight page. Information on this page may be out of date, since all the action has moved to the areas noted above.