Greenlight > Games > codagames's Workshop
Greenlight is being retired. For more information on how to submit games to steam, refer to this blog post.
This item has been removed from the community because it violates Steam Community & Content Guidelines. It is only visible to you. If you believe your item has been removed by mistake, please contact Steam Support.
This item is incompatible with Greenlight. Please see the instructions page for reasons why this item might not work within Greenlight.
Current visibility: Hidden
This item will only be visible to you, admins, and anyone marked as a creator.
Current visibility: Friends-only
This item will only be visible in searches to you, your friends, and admins.
Liege
Description Discussions6 Announcements2 Comments369 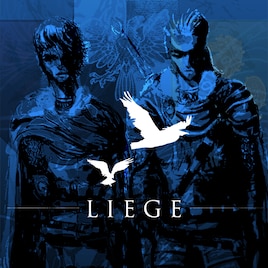 Our target goal was met in under four days! Thank you to everyone who's supported!

I've also added some (very) early gameplay footage to give a better sense of how the tactical combat will work. Check it out below:
here

Let's keep pushing to get this out on Steam!

Hi everyone, the Liege Kickstarter is officially live- Check it out!

The Story
One late autumn eve in the Kingdom of Liege, a King, his queen, and their royal heirs fall into a deep slumber from which they never wake. Following their mysterious deaths, a power struggle in the royal court ensues, and as the conflict quickly escalates, the Kingdom plunges into a bloody civil war. As war erupts across the land, we track the converging paths of characters aligned across various factions, from the noble houses vying for the throne, to the orphaned Royal Army, to an underground movement of outlaws with plans to incite revolution amidst the chaos.

Liege is a story that is written for an adult audience. It’s a drama about conflicted, intertwined, and human characters, forced to wage war for their lives and their homeland.

The Tactics
Battles in Liege are tactical and turn-based, and they emerge seamlessly as you wander through the realm. There are no jarring transitions that pull you out of the story and into some random battle arena floating in oblivion. Your heroes simply draw their weapons where they’re standing, and the fight begins.

The gameplay focuses on strategic placement of units and movement, and is inspired by games like FF Tactics, Fire Emblem, and chess. At the core of the gameplay is a system of unit classes and banners. Each class has special perks and characteristics, which are designed to interact in interesting ways; for example, you can arrange your pikemen into a phalanx with strong directional defense to defend rear archers, but certain Knight classes are well suited to break this formation. Banners add further depth by granting stat bonuses to favored classes.

The game emphasizes spatial elements over leveling and equipment, so you won’t be able to grind until your party is effectively invincible. Your units will always be vulnerable; in fact, a single direct strike to an undefended unit will often prove fatal. Unused actions during your turn will determine your unit’s defensive ability during enemy turns. As a result, you will always need to balance evasion and defense, with well-timed, coordinated offense to survive.

Combat in Liege is meant to deliver elegant, accessible, and deterministic mechanics that reward skill over blind chance. It aims to avoid the arbitrary complexity common to games in the genre, while retaining the depth and challenge that draws us to it in the first place.

The Art
One of the earliest goals with Liege was to create a game with an instantly recognizable, signature visual identity. Although the game was inspired by RPG classics from a bygone era, the game doesn’t settle with a retro style that attempts to imitate their look and feel. Instead, it leverages the latest available technology to create something that feels like a natural extension of the style pioneered during that period.

In addition to the visuals, the audio is a key part of the game’s art direction. Again, instead of attempting to emulate 16-bit classics, Liege will take full advantage of modern hardware to deliver an epic, orchestral soundtrack with a lush, organic sound.

Axle Sep 22, 2017 @ 10:12am
Looks like they moved the development updates to the Kickstarter Comments page
https://www.kickstarter.com/projects/codagames/liege/comments

XmikeX19 Jul 22, 2015 @ 10:13am
Hey guys, if you want the most recent news on this upcoming game liege, check out this website http://www.codagames.com/blog/ . That is the developers own website containing the most up to date news on the game!

Darkneko Mar 10, 2015 @ 10:27pm
Hi!My name is Christina Migliara and here my youtube channel where i vlog about video games and anime:https://www.youtube.com/channel/UCdPNUaZpUs_8cyNj_Fd4nYw . I am writing to you to ask if i can have review copy on your game? To promote your stuff

Tarnicus Apr 21, 2014 @ 7:01pm
@Hrist Valkyrie - Check out the kickstarter page for the most recent news :) https://www.kickstarter.com/projects/codagames/liege/posts