Greenlight > Games > Brunhildr's Workshop
Greenlight is being retired. For more information on how to submit games to steam, refer to this blog post.
This item has been removed from the community because it violates Steam Community & Content Guidelines. It is only visible to you. If you believe your item has been removed by mistake, please contact Steam Support.
This item is incompatible with Greenlight. Please see the instructions page for reasons why this item might not work within Greenlight.
Current visibility: Hidden
This item will only be visible to you, admins, and anyone marked as a creator.
Current visibility: Friends-only
This item will only be visible in searches to you, your friends, and admins.
Odallus: The Dark Call
Description Discussions4 Announcements6 Comments391 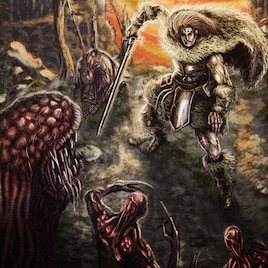 Brunhildr
Offline
See all 64 collections (some may be hidden)
Indiegogo

View Odallus: The Dark Call in the store

Hey everyone! Thanks to your help Odallus is now approved on greenlight program!
We are still working on Odallus and we still have a plenty of work to do before finish the game however we are always making progress and you can check this progress in our facebook page!
https://www.facebook.com/JoyMasher

Hey everyone! We have just tested our skin system with the Gargoyle skin! Sure you have never seen this gargoyle in a game before, right? *wink wink*

Video is on our Greenlight main page and also here[http//%26quot%3Bhttps]!

In search for the Ultimate Power, a Dark Lord and his wretched army are ravaging a once peaceful land, destroying villages and leaving no good soul alive. To put a stop to this carnage, the warrior named Haggis must wield again his already bloodstained blade and chase down the Dark Lord. Odallus is the story of Haggis’ pursue in the format of a dark fantasy classic game.

Odallus is a NES inspired exploration game with lots of action. It will be divided in stages, but there is no one-way-only in Odallus and levels have many paths, including to other levels. However, all paths in Odallus are infested by dangers and demons to which Haggis must be always watchful.

Core Gameplay Features
If you like good ol'exploration games, Odallus is for you!

If you liked Odallus, our game Oniken is also in Greenlight!
Popular Discussions View All (4)

Darkneko Mar 10, 2015 @ 10:28pm
Hi!My name is Christina Migliara and here my youtube channel where i vlog about video games and anime:https://www.youtube.com/channel/UCdPNUaZpUs_8cyNj_Fd4nYw . I am writing to you to ask if i can have review copy on your game? To promote your stuff

Odallus: The Dark Call has been Greenlit and is now listed in the Steam store. For the latest information, purchase options, and discussions for Odallus: The Dark Call, please see it on the Steam Store or in the Steam Community.
Visit Store Page
For more details Visit Community Hub
For latest discussions
If you really, really want to, you can continue to the Greenlight page. Information on this page may be out of date, since all the action has moved to the areas noted above.