Greenlight > Games > Hellofdaymn's Workshop
Greenlight is being retired. For more information on how to submit games to steam, refer to this blog post.
This item has been removed from the community because it violates Steam Community & Content Guidelines. It is only visible to you. If you believe your item has been removed by mistake, please contact Steam Support.
This item is incompatible with Greenlight. Please see the instructions page for reasons why this item might not work within Greenlight.
Current visibility: Hidden
This item will only be visible to you, admins, and anyone marked as a creator.
Current visibility: Friends-only
This item will only be visible in searches to you, your friends, and admins.
Strike Vector
Description Discussions38 Announcements9 Comments1819 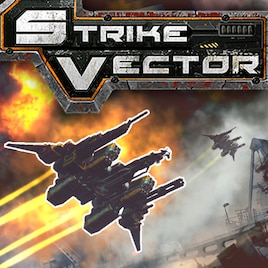 Hellofdaymn
Offline
See all 219 collections (some may be hidden)

View Strike Vector in the store

Ragequit Corporation is proud to announce you that Strike Vector will enter open beta stage early January 2014. We already have more than 500.000 views on youtube.

- Starting with a 4 indie devs core team, the now 9 devs indie team behind Strike Vector is almost ready to launch Strike Vector after 15 months of hard work.
Strike Vector have been greenlit under one month in august 2013 by steam and will now be more than ever released in early 2014.

FAST BRUTAL AERIAL FPS
Strike Vector is a new kind of fast FPS wich takes place in the sky in a post-apocalyptic cyberpunk world.
In the pure tradition of the sacred monsters of hardcore FPS such as Quake 3, Strike Vector will offer you a massive challenge if you want to stand against the best players :

- Juggle with the two transformation modes to surprise and eradicate the other players.
Rush to the fight and carpet bomb the battlefield with the Jet mode and engage the enemy in lethal close combat with the hover mode.

- With 8 unique weapons and a lot of specialisation perks, try to create the best combination to rocket the score board to the top.

- Prepare for a massive adrenaline rush when you’ll be flying across 8 gigantic and unique industrial sci-fi arenas where a crash is waiting for you at any moment.

- Customize your Vector the way you like with a choice of various cockpits and engines to be the pimpiest pilot around !

All the future contents for Strike Vector will be provided for FREE.
- The game will constantly grow with FREE DLCs. Ragequit Corporation will bring new maps, new amazing modes and many other surprises...
No premium versions, no micro-payments, no costly DLCs! All of that will be free for players.

Strike Vector, will be available on Steam at early 2014 and is now about to reach Alpha Stage.

Ragequit Corporation is an independent studio. We are very proud to announce Strike Vector, our first game developped with the Unreal Engine 3. Strike Vector, the 3rd/1st person air shooter, will be available on Steam at early 2014. After a successful 6 weeks Greenlight campaign, Strike Vector is now about to reach Alpha Stage.
Project Strike Vector

Gameplay
With a distinct old school feel, reminiscent to games such as Crimson Skies, Quake 3 and Unreal Tournament, Strike Vector will let you test your reflexes and skills against your friends. Team flight and mutual assistance is required to fulfill your missions but individual aiming and piloting skills are also mandatory.

This unique gameplay allow you to fight face to face with your enemies like classical FPS, or playing dog fighting.

Game modes
Targets to reach, positions to defend, enemy structures to destroy … Players may select among famous game modes such as deathmatch, team domination, team deathmatch, capture the flag, as well as many others !

Build your own Vector
Equip your Vector in your own style with two differents weapons to get the edge on various situations or be a specialist by choosing the same weapon for each side of the craft. Hundreds of combinations are available, making your ship the only kind of his genre on the battlefield.

Depending on your weapons and perks choice, your playstyle will be different from another player, you create your own class :

- Fast and stealthy to capture positions and hide in massive structure to surprise your enemies.

Customize your ship appearance among various type of skin decorations and put a gadget in your cockpit to make you feel like you are at home. A mach 3 home!

You will find many destructible objects like giant cargos or pressure vessels and use them to trap players in deadly explosions, block or open passages and fulfill your mission objectives.

Use your environment to avoid and escape homing missiles by adopting a risky flying style. Play the way you want with various game mode adapted for a 360° warfare

Eliminate every players in classic deathmatch, support your team in domination or be the fastest pilot around in race mode and more...

Business Model
Strike vector is not a free to play, and will offer free DLC after the game release. We want to make sure that every person playing Strike Vector have access to the same content regardless of when they will get the game.

Originally posted by Kotaku:
You Won't Believe This Is An Indie Combat Game

Originally posted by pixelenemy:
There’s something about two spacecrafts aiming to take each other down that just seems so badass

Strike Vector has been Greenlit and is now listed in the Steam store. For the latest information, purchase options, and discussions for Strike Vector, please see it on the Steam Store or in the Steam Community.
Visit Store Page
For more details Visit Community Hub
For latest discussions
If you really, really want to, you can continue to the Greenlight page. Information on this page may be out of date, since all the action has moved to the areas noted above.