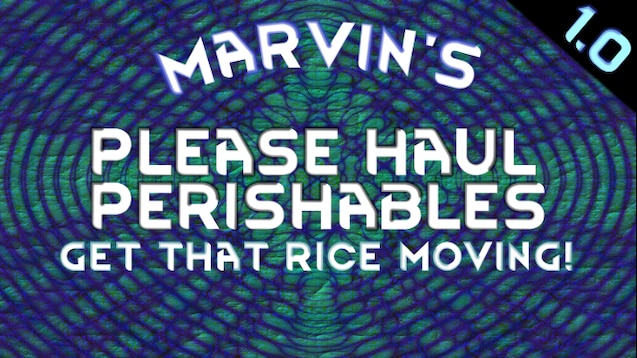 This item has been added to your Subscriptions. Some games will require you to relaunch them before the item will be downloaded.
In 1 collection by Marvin
Marvin's Most Abducted Mods

21 items
Description
Safe to add or remove from existing saved games (as far as I know).

Adds new WorkGivers for hauling, which prioritise hauling perishables or food over non-perishables. Items will be considered perishable if they would rot in less than a year or deteriorate to zero hitpoints in ten days or less.

Rain and water, which both cause higher deterioration rates, will be taken into account.

Perishable items will only be given priority for hauling if they are outside.

A check is made to see if the perishable has a large enough stack size. Things which have a maximum stack size of 1 (weapons and apparel for example) pass automatically. Other perishables must have a high enough stack count for that kind of item. The exact threshold depends on the hauler's current carrying capacity and the ideal carrying capacity for their race, but it only goes as high as 40. The perishable can still pass the check if there are other perishables of the same type nearby, or if it would deteriorate to zero hitpoints in ten days or less.

Food will also be hauled if it needs to go from low to high priority storage.

New in this version, if Pick Up and Haul is active, the mod will use its hauling routine instead, but the order in which things will be hauled will still be decided by this mod.

Also, to improve performance, the lists of things to be hauled will be cached in memory and only updated when a certain number of in-game ticks have passed.

A debug mode exists and will give feedback when you right-click a haulable, so if it is not considered perishable or food or a big stack, that will show as a reason for not doing the job, in addition to still allowing you to manually prioritise hauling.

Go to the Alpha 17 version.

If you like this mod, why not consider looking at some of my other mods?

I have a Patreon where I talk about my mod development: https://www.patreon.com/marvinkosh
< >
103 Comments

Owlverlord Nov 17, 2019 @ 6:26am
Sadly it seems like this mod somehow broke in my mod constellation and I can't tell pawns to haul anything (when I removed it the it was ok, but i also use Achtung!)

ELLIOTTCABLE Sep 21, 2019 @ 10:53pm
Ditto re: adding and removing from existing games; that's useful information to add to the description!

@HMS: I don't know if it's a certain situation that causes that to happen to you; but I use PHP and Achtung together and haven't seen that error yet. (=

こんこんきつ~ね Jun 17, 2019 @ 10:22am
I can confirm that removing this mod fixes the issue so it definitely is Achtung and PHP interacting with each other

Here is the error it threw, Steam doesn't allow me to paste due to the 1000 character limit: https://pastebin.com/zEWfYRZx

こんこんきつ~ね Jun 17, 2019 @ 9:49am
Hi there, just an FYI that it seems like Achtung and Please Haul Perishables (this mod) are not fully compatible for some reason, I can provide you with the error it threw if it helps

Marvin  [author] Apr 25, 2019 @ 6:26am
Do you have any shelves or something else that will keep things from deteriorating outside?