Greenlight > Games > Schrompf's Workshop
Greenlight is being retired. For more information on how to submit games to steam, refer to this blog post.
This item has been removed from the community because it violates Steam Community & Content Guidelines. It is only visible to you. If you believe your item has been removed by mistake, please contact Steam Support.
This item is incompatible with Greenlight. Please see the instructions page for reasons why this item might not work within Greenlight.
Current visibility: Hidden
This item will only be visible to you, admins, and anyone marked as a creator.
Current visibility: Friends-only
This item will only be visible in searches to you, your friends, and admins.
Splatter
Description Discussions4 Announcements4 Comments339 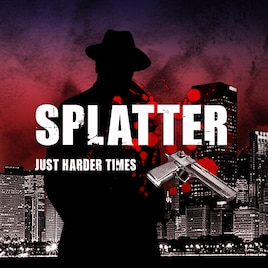 mimu
Offline
See all 69 collections (some may be hidden)

View Splatter in the store

In case you didn't notice: Splatter has been released on Steam for quite some time now. See here: http://store.steampowered.com/app/281920 Have fun!

So yes... we're greenlit! Still a great feeling, even after two weeks now. We're already working on the next update, with new content and many reworked features. And now we're also integrating all those cool Steam features. The next Splatter version will feel like an all-new game!

Of course the update will be free to current players just like every update before.

Read More
Description
Release date: It's ready.
Fight loads of zombies and monsters, use flares to scare off enemies and light up the dark, experience a film-noir story, battle awesome boss monsters and play with your friends in local Multiplayer game modes. Thats Splatter. Anything else to mention?

The Game
Splatter - Just harder times is an oldschool top-down shooter with unique light/shadow gameplay mechanics. We have just released the first version of our game, you can get it at our website: {LINK REMOVED}www.splattergame.net.

The brief summary:
The Story
The modern urban environment is a cold place in which knowing lots of people has replaced having real friends. Max is one of its inhabitants - alone admidst a grey crowd.
On a murky sunday evening he found himself reading at home when suddenly the world around him takes a turn for the apocalypse. Mankind suddenly was the minority, but the struggle for survival forges better bonds than the previous secure life ever could.
Is humanity actually worth saving? You might end up doing it anyways.

The Future
The first version of Splatter is already released. But of course we'd like to enhance it even further!

Schrompf  [author] May 8, 2014 @ 2:10am
Yes, for sure! I'll do it by hand if necessary. Please stay with me for a few weeks more and Splatter will be here on Steam. Then I'll get back to Holger and start figuring out what can be done to get you all your well-deserved Steam keys.

NowWeClutch May 7, 2014 @ 11:38pm
I also bought this game from IndieMeadow, any chances of getting a steam key when the game will be released?
< >

Splatter has been Greenlit and is now listed in the Steam store. For the latest information, purchase options, and discussions for Splatter, please see it on the Steam Store or in the Steam Community.
Visit Store Page
For more details Visit Community Hub
For latest discussions
If you really, really want to, you can continue to the Greenlight page. Information on this page may be out of date, since all the action has moved to the areas noted above.