Greenlight > Games > mike's Workshop
Greenlight is being retired. For more information on how to submit games to steam, refer to this blog post.
This item has been removed from the community because it violates Steam Community & Content Guidelines. It is only visible to you. If you believe your item has been removed by mistake, please contact Steam Support.
This item is incompatible with Greenlight. Please see the instructions page for reasons why this item might not work within Greenlight.
Current visibility: Hidden
This item will only be visible to you, admins, and anyone marked as a creator.
Current visibility: Friends-only
This item will only be visible in searches to you, your friends, and admins.
Armikrog.
Description Discussions19 Announcements8 Comments2217 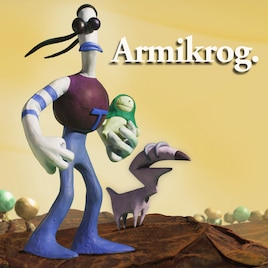 mike
Offline
See all 216 collections (some may be hidden)
Kickstarter
Recent Announcements View All (8)
Music and more!
August 1, 2014 - mike

Things have been very busy here at Pencil Test Studios.We've had a few working visits from some amazing people who are working on the game and doing some pretty incredible things that we think you'll enjoy.

We've got some great news regarding the music of Armikrog! Over the last couple of weeks we've had the extreme pleasure having the incomparable, incredibly talented Terry Taylor and his equally talented writing partner Rob Watson visiting the studio. We had a great time going through the game with them. They have been in studio recording the music for Armikrog and came in for some inspiration. They love getting their hands dirty in the clay and talking through the story beats in order to pour all that into the music for the game.

And here is a very special little treat--a couple snippets from two very early "idea" tracks that Terry and Rob did for Armikrog! Keep in mind that these are just some preliminary ideas that they are playing with, but we here at Pencil Test we absolutely LOVE them! We wanted to share the excitement with you all!

In other amazing news we're super excited to announce that our friend Tim Reckart has come in to contribute his stop motion talents on Armikrog! We're very happy and fortunate to have him as a guest animator here. Tim is an academy award nominated animator/director for his short "Head over Heels". He has won countless awards for his work including an Annie Award for best student film. Needless to say his work for Armikrog is already looking amazing!

That's it for now--we hope you're as excited about this music and animation news as we are!

As we continue to work toward the game's release later this year, know that we really appreciate all of you support!

April was crazy-busy and we missed sending out an update, but wait no more -- here's the latest Armikrog news!

The biggest bit of news is that we've decided to push Armikrog's release date back a few months, closer to the end of 2014. Yes, I know...not the news that everyone wants to hear, but our goal is to bring you the best possible game experience, and adding some time to the schedule will be really good for the project.

Over the course of creating the game, we've added puzzles, levels and story to help expand the Armikrog universe and make for a better game overall. But as we've been getting closer to the release date, we found ourselves trying to figure out what we could cut in order to make the July deadline. This just didn't seem right. So, by extending the schedule, we'll be able to include the additional material and create a richer experience.

Does this mean we'll need more money? Nope, we'll be stretching our current budget to cover the extra production time. Does this mean the rewards will be shipped later too? Yes. The game is our top priority so the extended schedule will push rewards back as well.

So the game will be released before the end of 2014. We really appreciate your patience on this, as we know you're excited to play the game. Once we have an exact date, we'll post it here in an announcement.

We're continuing the process of replacing our pencil animations with the final stop-motion animation. We've also started building sets for the game's cinematics -- the funny little movies that you see as you play though the game. These cinematic sets are built much larger than the smaller sets used for the levels. We build these sets bigger so we use full sized puppets and show more detail!

In other production news, we've destroyed a perfectly good accordion and used it's pieces to build one of the levels. Probably a first in the history of games.

Next month we'll be heading to E3! Last year we brought along Tommynaut to meet and greet Armikrog fans, so this year Beak Beak will be coming along for the ride! If you're going to be at the show, follow us on twitter @Armikrog and we'll be tweeting times and places to meet up with Beak Beak. He's always up for making new friends!

Read More
Description
Release date: Summer 2014
Armikrog is a brand new clay-animated point and click adventure game brought to you by the creators of the Neverhood and Earthworm Jim
Armikrog, while not a sequel, is already being called by many a spiritual successor to the Neverhood as it's being developed by the same core creative group with the same passion and dedication to blurring the lines between art and technology in a video game. Featuring the unique characters and signature art style of creator Doug TenNapel, the magical appeal of stop motion animation, and the musical genius of Neverhood composer Terry S. Taylor, Armikrog promises to be a game that will deliver on the enjoyable challenge, whimsy and humor that made the Neverhood accessible to such a wide audience.

Armikrog tells the story of a space explorer named Tommynaut and his blind, alien, talking dog Beak-Beak, who crash land on a strange planet and find themselves trapped within the walls of a fantastic, mystical fortress called Armikrog. Players will need to solve an array of entertaining and mind-bending puzzles to help Tommynaut out of his predicament, and will quickly discover that the epic Armikrog is much more than simply a fortress from which they must escape.

Armikrog is being developed by Pencil Test Studios (founded by Neverhood and Earthworm Jim alumni Ed Schofield and Mike Dietz) in partnership with creator Doug TenNapel. We are currently running a Kickstarter campaign to raise funds for development, which can be viewed here:

Tony Crunkoff Jan 26, 2016 @ 7:57pm
This game is selling on DVD,in steam it not yet released.By the way i was try playing and what i say...not bad,but its not Neverhood-level.Armikrog good game, but after few hours it may be boring