Greenlight > Games > WW1GameSeries's Workshop
Greenlight is being retired. For more information on how to submit games to steam, refer to this blog post.
This item has been removed from the community because it violates Steam Community & Content Guidelines. It is only visible to you. If you believe your item has been removed by mistake, please contact Steam Support.
This item is incompatible with Greenlight. Please see the instructions page for reasons why this item might not work within Greenlight.
Current visibility: Hidden
This item will only be visible to you, admins, and anyone marked as a creator.
Current visibility: Friends-only
This item will only be visible in searches to you, your friends, and admins.
Verdun
Description Discussions65 Announcements5 Comments2214 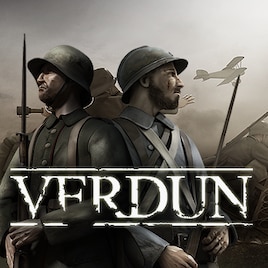 WW1GameSeries
Offline
See all 383 collections (some may be hidden)

View Verdun in the store

The game is now live on Steam Early Access. Get it here: http://store.steampowered.com/app/242860

Cya in the frontlines!

We are greenlit by Steam! Many thanks for all your support!!

Read More
Description
Release date: SUMMER 2013
Verdun is a squad based massive multiplayer first person shooter set in the first world war. Inspired by the infamous battle of Verdun in 1916 players are able to take part in never seen before WWI action. Made by 3 indie developers from BlackMill and M2H.

Game Features in a nutshell

Squad gameplay
Verdun is a co-operative game in its very core. The game is build around squads consisting out of 4 players. Central to the co-operative gameplay is the so called co-op xp which is earned whenever you play together with another player. The more co-op xp you have with the squad members, the more powerful the squad will be.

Squad types
A squad has a certain type, each squad type is distinct and based on a historical unit. As a result a squad type has plenty of unique characteristics that result in different strategies on the battlefield. In Verdun you fight in a squad under the banner of Alliances Entente or the Central powers. The game will feature the following squad types:

Each squad type has 2 Abilities that all its members obtain when they choose to play as part of the squad. These abilities make sure the squad gets additional incentive to perform its task.

Squad Roles
Within each squad type, there are 4 unique roles to choose from which are specific to that squad and the role it has on the battlefield. Each role gets an attire, weapons and abilities based on the nation the squad is fighting for and its historical unit. Each role also gets 3 abilities which reward the player for performing the task within the squad. There are two kinds of abilities:
For instance, joining a poilu squad will give you the option to assume the role of:
Caporal: Mobile spawnpoint, mortar strikes; Fusilier rifle accuracy abilities; Mitrailleur: gunner support role, Grenadier: (rifle) grenades. Another example would be the AlpenJäger squad which has a set of totally different roles such as the “Überwacher” observer role, “Aufklärer” scout role and “Scharfschütze” sniper. Its “Patrouillenführer” officer can call in a recon airplane.

Squad levels
In addition squads are able to level up. Leveling squads has a number of effects:

Environments
The environments in Verdun are based on real world battlefields or trench maps. We took great inspiration from visiting the actual battle sites to observe characteristics.

Weapons and Attachments
Verdun will feature authentic weapons used by the respective nations in the first world war. We took great care in modeling these weapons from real world examples and photos.

Beta and plans[/b]
Since April 23d 2013 we ran a successful (web) beta with placeholder animations, 2 concept levels “Vauquois” and “Argonne”. Through no less than 60 live versions we created at a very stable product.

We are working hard on the following improvements, expecting these to be ready by July;

Buzz about Verdun
While we have not yet send out press releases, below is a growing list of buzz around Verdun.

Macho_Man_Randy_Savage Sep 24, 2014 @ 9:22am
Excelent game, well researched and historically acurate, a must play for any history buff! as well as a welcome change to the fps genre

Verdun has been Greenlit and is now listed in the Steam store. For the latest information, purchase options, and discussions for Verdun, please see it on the Steam Store or in the Steam Community.
Visit Store Page
For more details Visit Community Hub
For latest discussions
If you really, really want to, you can continue to the Greenlight page. Information on this page may be out of date, since all the action has moved to the areas noted above.