Greenlight > Games > Subspace Continuum's Workshop
Greenlight is being retired. For more information on how to submit games to steam, refer to this blog post.
This item has been removed from the community because it violates Steam Community & Content Guidelines. It is only visible to you. If you believe your item has been removed by mistake, please contact Steam Support.
This item is incompatible with Greenlight. Please see the instructions page for reasons why this item might not work within Greenlight.
Current visibility: Hidden
This item will only be visible to you, admins, and anyone marked as a creator.
Current visibility: Friends-only
This item will only be visible in searches to you, your friends, and admins.
Subspace Continuum
Description Discussions12 Announcements3 Comments560 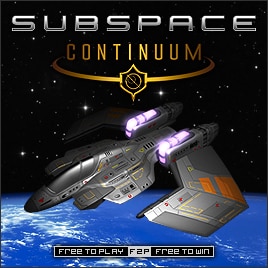 KrynetiX
Offline
See all 18 collections (some may be hidden)

View Subspace Continuum in the store

It's been a while since we've posted any sort of announcement on this Steam page. However, we're pleased to announce that we're pushing for a go-live for Steam on 3rd July 2015.

We've been working hard making the appropriate preparations to get Continuum on Steam.

SSCU Trench Wars have released an Android App that will allow you to connect to SSCU Trench Wars from your Android. We are looking at adding additional zones to this awesome app. Full functional chat, player list and arena list.

You can see screenshots and download the app from the player store:
https://play.google.com/store/apps/details?id=com.subspace.trenchwarschat&hl=en

You'll need to do '?help I want to use TWChat!' in the SSCU Trench Wars zone before you use the app. If you can't login, send me an email at: developer@subspace-continuum.com and I'll get you setup.

We hope to have an iOS version too, depending on the feedback we get from the application.

Read More
Description
Continuum is a player-maintained online shoot ‘em up game enjoyed by people from all around the world - many of whom remain addicted to the fast paced explosive battles! Gameplay is extremely competitive and there are cup leagues, tournaments, cash prize events, a variety of team & squad based competitions. This completely free game also has a pretty interesting player community with its own history which is so in-depth that books could probably be written about it!

The main developer of Continuum also created Skype - so you may not be surprised to learn that built into the game client is a sophisticated chat client which many Continuum addicts say is their way to talk to their buddies online! This allows players to very effectively communicate while in-play - or spectating gameplay - by joining a huge variety of chats or making up their own and using the games unique messaging system to effectively communicate with their team mates – and their enemies!

There are eight unique ships to choose from in Continuum - their properties are different and depend on which game mode or event is being played – from a variety of hundreds – several of them are highly similar to modes from other games, examples include Team Fortress and Counter Strike which people experienced in shooter games may recognise well. A wide selection of in-game weapons and items exist including bullets, mines, decoys, thors-hammer bombs which can penetrate walls, burst - a fast spread of bullets which are a danger to any nearby ships, repels, and loads more. There’s much more to Continuum – far too much to fit here!

So what are you waiting for!? Go ahead and download Continuum now and get in on the action!
{LINK REMOVED}http://www.subspace-continuum.com

Y.T. Jul 7, 2015 @ 5:25am
guys, extreme games draft league is starting this week, free agents signups are still open, so if you played in past and want that feeling back again, get here and sign up! http://www.extreme-games.net/forum/viewforum.php?f=314

It's more addicting than crack.

Subspace Continuum has been Greenlit and is now listed in the Steam store. For the latest information, purchase options, and discussions for Subspace Continuum, please see it on the Steam Store or in the Steam Community.
Visit Store Page
For more details Visit Community Hub
For latest discussions
If you really, really want to, you can continue to the Greenlight page. Information on this page may be out of date, since all the action has moved to the areas noted above.