Greenlight > Games > MadOtter's Workshop
Greenlight is being retired. For more information on how to submit games to steam, refer to this blog post.
This item has been removed from the community because it violates Steam Community & Content Guidelines. It is only visible to you. If you believe your item has been removed by mistake, please contact Steam Support.
This item is incompatible with Greenlight. Please see the instructions page for reasons why this item might not work within Greenlight.
Current visibility: Hidden
This item will only be visible to you, admins, and anyone marked as a creator.
Current visibility: Friends-only
This item will only be visible in searches to you, your friends, and admins.
Villagers and Heroes
Description Discussions14 Announcements13 Comments359 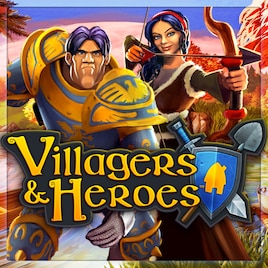 MadOtter
Offline
See all 46 collections (some may be hidden)

View Villagers and Heroes in the store

Oh, scheming wizards with your insidious potions and twisted minds, how I do look forward to meeting your shifty kind again. But where will our much anticipated reunion take place? Nowadays, when you waggle your little sticks about and cast puffy snowflakes at your foes, such grandiose theatrics are performed beneath the open sky for all to see. No longer are you secretively holed up, rat-like, in the dark bowels of the earth, hording over your private magics with a rabid ferocity as once you did.

Ah, such gallant behavior! Can you not recall the extent of your malevolent paranoia in those years? Or perhaps the face of the small boy, who, in daring to seek your aid, was rewarded with a blighting curse? My sweet sister had taken ill, and, as my mother tended to her, I journeyed down into your squalid nest of caves in search of medicine. The sound of your outraged shrieks reverberates with me still. My naïve eyes had looked upon one of your mysterious concoctions, and for that innocent crime I was savagely punished.

Such was the severity of the disfigurement cast upon my boyish face, that when I reached adulthood, I crafted for myself a mask of glittering jewels for which to conceal my hideousness behind. The precious gems belonged to my master, though of this, you and your friends remained entirely ignorant of when you welcomed me into your fledgling little village, and celebrated his demise.

Since Ardent was founded upon his death, it is only fitting that I destroy it in preparation for the new era about to unfold. As I did then, and I do now, I remain forever his humble servant. Come wizards, let us play, and please do bring all your friends along for what I can promise will be a memorable party indeed.

Boorish louts and crazed thugs, the lot of them. Whomever can I be speaking of? Yes, warriors, if you can, do stop slobbering on your battle horns and try to focus your bleary eyes and sluggish minds upon my upcoming words, which, given your regrettably limited attention spans, I will endeavor to keep to a minimum. Grunt once for yes if you understand.

It was your guttural howls, maniacal war cries that I primarily recall in those years of the Shadow. Though the ravaged land was overrun by ghoulish beasts, you sought not their blood, but your own! Camped up there in your foul nests, high in the mountains, a slaughtering frenzy erupted almost daily amidst your brutish kind, the cause of which usually over little more than a sour look gone astray. But how is it that I can attest to such base behavior? You will have forgotten, I’m sure, the earnest woman, who, with her young son and daughter in tow, inadvertently stumbled upon just such a melee.

In pursuit of a legend, my mother erroneously sought the Crystal Lady within your mountainous terrain. But so intent was your band of brutes upon slaughtering one another that when the crumbling hillside began to collapse under the force of your fury, my mother’s desperate cries went unheard. She perished on that day, drowned under a sea of falling rocks.

Take heed, warriors, for soon the earth beneath your own graceless feet will likewise crack and crumble. The mammoth gates of Castle Pyrron will be flung wide, and a ravaging ocean of stone shall be unloosed. My thundering army of gargoyles has been given but one directive: annihilate all.

Wield a mighty sword forged by your own hands and face a zombie prince in a shadowy cavern of floating mushrooms and dangling staircases. Let fly blazing arrows crafted from the trees in your backyard, or trade them for a basket of your neighbor’s freshly picked apples. Plant a garden, and join a guild. Build lasting friendships and together explore the beauteous wonder and dangerous mysteries of the Seven Realms.

Villagers and Heroes, a fantasy role-playing game with a vast multiplayer world, is easy to learn, has an intuitive user-interface, and features deep and rich gameplay with components never seen before. Providing thousands of hours of exploration and challenge, the Seven Realms, populated with quirky characters and ghoulish beasties, offers hundreds of quests and an array of different gameplay styles.

Highlights
Upcoming Features
With the aid of Steam and players like you, we have exciting plans in store for Villagers and Heroes!
What people say about Villagers and Heroes:
Free-to-play Model
Play Now!
The game is live and fully playable, and if a player creates an account during the Greenlight process, we will migrate your account to Steam! You can start building your account and leveling your character today, and then play on Steam after the game is Greenlit. Don’t wait, discover the Seven Realms today! Live. Build. Battle. It takes a Village to forge a Hero.

piemandoodle May 24, 2014 @ 11:58pm
game has a bug where when in game at points will automaticly, close your game whilst playing.

JdubC Apr 3, 2014 @ 1:44am
Played this game, since Runescape got old fast again. This game has everything I like Crafting and questing. The community is much better than any other game I have played. Everyone is nice and helpful. There are some limitations to free play, however its not game ending. You have on page for bank storage which isn't a big deal. You have 2 bags which to me isn't that big since you can get drops for 30 day extra storage bag. To those people complaining about limits on how long you can craft some things due to restrictions this isn't a problem because the game isn't made for the hardcore gamers. Its a casual game and fun to play. There are no items that allow pay to win because they do the cash shop right. This is one of the few F2P games where they actually listen to there players and try to make them as happy as possible. For anyone looking for a fun an casual game to pass the time and have fun this game is a must try.

Villagers and Heroes has been Greenlit and is now listed in the Steam store. For the latest information, purchase options, and discussions for Villagers and Heroes, please see it on the Steam Store or in the Steam Community.
Visit Store Page
For more details Visit Community Hub
For latest discussions
If you really, really want to, you can continue to the Greenlight page. Information on this page may be out of date, since all the action has moved to the areas noted above.