Greenlight > Games > Hanako's Workshop
Greenlight is being retired. For more information on how to submit games to steam, refer to this blog post.
This item has been removed from the community because it violates Steam Community & Content Guidelines. It is only visible to you. If you believe your item has been removed by mistake, please contact Steam Support.
This item is incompatible with Greenlight. Please see the instructions page for reasons why this item might not work within Greenlight.
Current visibility: Hidden
This item will only be visible to you, admins, and anyone marked as a creator.
Current visibility: Friends-only
This item will only be visible in searches to you, your friends, and admins.
Long Live The Queen
Description Discussions7 Announcements9 Comments791 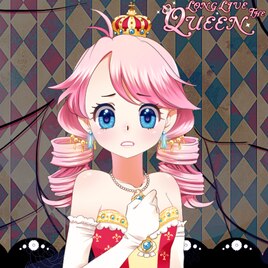 Hanako
Offline
See all 107 collections (some may be hidden)

View Long Live The Queen in the store

You can buy the game from steam here:

For customers who already own the game, please go here to redeem your Steam codes:

Thank you all for your support to get us to this point!

Being a Queen is no easy job. Especially when you're only fourteen, your mother has just died, and everyone and their pet snake is out to marry you, kill you, or worse. You must frantically learn the skills necessary to manage a country while fending off invasions, civil war, assassins, manipulative suitors, and eldritch abominations. Rule the world or die trying.

(And frankly, you are going to die. Medieval politics is VICIOUS.)

At its heart, this is a brutal strategy game. Nothing is random. Every choice has consequences. There are many different builds which can navigate the dangers and get through to coronation alive, but there are a lot more that won't. Take notes and plan ahead if you don't want to be next on the chopping block! Everyone around you has their own agenda to pursue. Stay one step ahead of the game and maybe, just maybe, you'll unlock your magical potential and unite your country behind you.

God Save The Queen - because no one else will!

Each time the protagonist dies, you find yourself coming back with a vengeance, determined to try a new strategy, a different approach to her upbringing. It's borderline addictive. It's also likely to make a monster out of you. By the end of my first successful playthrough, I had summarily butchered everyone who even thought about looking at us funny, forced the princess into a continuous state of docility and lied my way through every social encounter possible. Was it evil? Yes. Was it glorious? Definitely. - {LINK REMOVED}http://indiegames.com/2012/06/review_long_live_the_queen_han.html

Somehow it never occurred to my princess, whom I’d lovingly crafted into a tense, paranoid warlord, that she shouldn’t empty a box of mysterious mailcandy into her mouth. You would think studying poison and espionage would have saved me from this espionage poison, but instead, a list of other skills, skills I never studied, princess skills, were key to avoiding this fate. I guess that’s the lesson: you can’t build a successful Arya without adding a little Sansa. - PCGamer

If you’re the sort who can sink your teeth into a full afternoon of tabletop strategy, you’ll be happy here. Long Live The Queen is a slow-paced, cozy evening kind of game, good for folks who like numbers and critical thinking. And death. Pink frosted, chubby cheeked death. - {LINK REMOVED}The Mary Sue

Yes, I already have a title on Steam: Magical Diary. Play that too.

The game is ludicrously full of secrets and hidden plotlines. For starters, try out the player-made {LINK REMOVED}wiki and {LINK REMOVED}TVTropes guide as well as the {LINK REMOVED}official forums. Beware, spoilers abound! (but some people are into that)

This game is complete and available at {LINK REMOVED}http://www.hanakogames.com/llq.shtml - Should this game be Greenlit, existing customers will receive free Steam keys. So go ahead and get in now!

Hanako  [author] Feb 3, 2014 @ 4:26am
Sorry, but I don't speak Russian. Or spanish. We're working on some tools that will make fan-written translations easier, but I will have to rely on people who actually know the language!

Long Live The Queen has been Greenlit and is now listed in the Steam store. For the latest information, purchase options, and discussions for Long Live The Queen, please see it on the Steam Store or in the Steam Community.
Visit Store Page
For more details Visit Community Hub
For latest discussions
If you really, really want to, you can continue to the Greenlight page. Information on this page may be out of date, since all the action has moved to the areas noted above.