Greenlight > Games > Might and Delight's Workshop
Greenlight is being retired. For more information on how to submit games to steam, refer to this blog post.
This item has been removed from the community because it violates Steam Community & Content Guidelines. It is only visible to you. If you believe your item has been removed by mistake, please contact Steam Support.
This item is incompatible with Greenlight. Please see the instructions page for reasons why this item might not work within Greenlight.
Current visibility: Hidden
This item will only be visible to you, admins, and anyone marked as a creator.
Current visibility: Friends-only
This item will only be visible in searches to you, your friends, and admins.
Shelter
Description Discussions5 Announcements10 Comments465 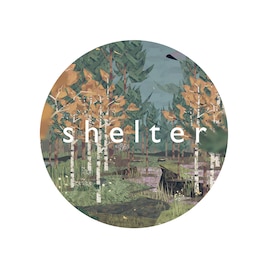 View Shelter in the store

Fellow friends! Today is the day we have been waiting for! Shelter is now live! So run along small badger friends and get your copy! We really want to hear what you think about the game, so please let us know.

Again, thank you all from the bottom of our hearts <3

To celebrate this day we have a brand new trailer!

We present to you: "Fall Again" - Shelter Release Trailer
http://www.youtube.com/watch?v=tmKm_oX8wzQ

Today is a big day friends!

The release date for Shelter is set, and the game will go live August 28th! We are so happy and we can't wait for everyone to experience the adventure of mama badger and her baby cubs.

The game is on pre-sale right now as well with a 10% discount, so if you want to be an early bird (badger) and grab it, just go ahed!

We are so happy this is happening and we really hope you guys will enjoy the very speciel experience we have worked so hard on to bring you.

"Honey Badger doesn't give a f**k"

Read More
Description
Release date: Late Summer 2013
Introduction
Shelter is the new game from Indie developer studio Might and Delight, who brought you Pid in 2012.

As the mother of a litter of cubs you are forced out from familiar and safe surroundings to find new shelter in a beautiful, but dangerous world. The harsh reality of nature plays a pivotal role whilst at the same time the game aims to pay homage to the great outdoors and all its imposing beauty.

Gameplay Overview
Shelter is a third-person, single-player adventure game for PC and Mac and that is developed in Unity. It tells the story of a badger family facing the dangers of the wild, while the cubs are too young to survive without their mother. The games narrative is linear and guides the player through the badger families’ life, and different scenarios that nature brings: Deep forests, vast fields, dark nights, heavy rain, hungry predators and even raging wildfires.

From an animal perspective

A philosophy we are striving to achieve is to create a really strong immersion to the animal kingdom. That's why there's not a single trace of humanity in the actual game. We want the humanity aspect to come in from the players who are playing the game, with emotions we humans feel. If we succeed with that we have reached our goal.

Care for the cubs

As most of a parental animals life, especially badgers, revolves around their cubs, we wanted to create a game where most, if not all of the gameplay aspects revolves around them as well. Whether it be finding, collecting, hunting, gathering and distributing food, or protecting, hiding and sheltering them from harm. We want it to be your job as the mama badger to make them strong, so they can survive and eventually one day take care of themselves.

The Art of Shelter
The look of Shelter is inspired by the graphical hard cut look of Japanese art and symbolism. Every surface in Shelter is covered by a hand painted pattern that takes the idea even further. The art of Shelter have never strived to surpass nature in its excellence, but instead offer an intriguing and beautiful abstraction.

Might and Delight
Might and Delight is a small to mid-size development studio located in Stockholm, Sweden.
We believe that one of our greatest strengths are that each of us come from different fields of the entertainment industry, such as traditional AAA-game development, indie games, teaching game theory and the movie industry. The variation and clash of all these experiences able us to see game development in a different light. Our ambition from the start has always been to create games that we believe stretches the boundaries of the video game culture, and to bring you something hardly ever seen before.

Below is a summary of where our team members have previously worked:

Our previous game Pid is already available on Steam: http://store.steampowered.com/app/218740/

Stranger Mar 3, 2015 @ 1:04pm
i cant frikin play the sequel to this! i bought it, and when i went to install it, it said Game Purchased: Today. no play or install button. defective game. scam or glitch? note that this is only happening on shelter 2 for me.

Shelter has been Greenlit and is now listed in the Steam store. For the latest information, purchase options, and discussions for Shelter, please see it on the Steam Store or in the Steam Community.
Visit Store Page
For more details Visit Community Hub
For latest discussions
If you really, really want to, you can continue to the Greenlight page. Information on this page may be out of date, since all the action has moved to the areas noted above.