Store Page
Tabletop Simulator>  Workshop > Jakob van der Flup's Workshop
This item has been removed from the community because it violates Steam Community & Content Guidelines. It is only visible to you. If you believe your item has been removed by mistake, please contact Steam Support.
This item is incompatible with Tabletop Simulator. Please see the instructions page for reasons why this item might not work within Tabletop Simulator.
Current visibility: Hidden
This item will only be visible to you, admins, and anyone marked as a creator.
Current visibility: Friends-only
This item will only be visible in searches to you, your friends, and admins. 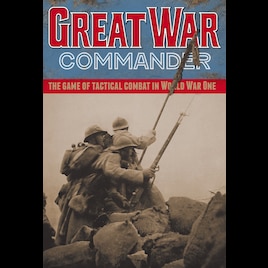 This item has been added to your Subscriptions. Some games will require you to relaunch them before the item will be downloaded.
Description
Game Design: Roger Nord and Pascal Toupy
Duration: 180 Minutes
Players: 2
Copyright © 2018 Hexasim

Disclaimer: You will need the physical copy of the game in order to play this module.

In 1914, the great powers of Europe could not save the international system that had been in place since Metternich a century before. Tangled alliances pushed them to the brink. Nations miscalculated and expected a short, limited war, but a four-year World War blew up in their faces and forever changed the continent and the world.

Great War Commander traces the war as the nations and empires fought it on the western front across Belgium and northern France. The forces of three major powers-France, Germany and America- all have forces in the game. One player handles Germany while the other side commands either France or America.

Great War Commander (GWC) is a wargame based on the popular Combat Commander series created by Chad Jensen where two players take turns playing “Fate cards” in order to activate military units on the mapboard. GWC offers many new and unique elements to its parent system. The maps are deeper, allowing more playing surface to maneuver two battalion-size forces facing each other.

There are several new orders, like Offensive, Runner, and Machine Gun Suppress, all reflecting the intense combat. There are over 30 actions including Engineering works, Go to Ground, and Rolling Barrage, highlighting terrain destructions and powerful artillery. 40 events deal with experiences unique to the times, such as Tanks and Sturmtruppen. Among the new and many contemporary events are Trommelfeuer, High Command Meddling, Petard Raquette and Machine Gun Nest.

Great War Commander puts emphasis on the rigid top-down field command structure of the period with captains giving orders to lieutnants and NCOs which is new to the system. Besides the Fate Cards, there are Strategy Cards which factor in higher command and give a flavor and depth to the battles beyond that of the tactical level .
French Strategy Card German Strategy Card US Strategy Card

Players already familiar with the Combat Commander system will find a ready path to learning Great War Commander, at the same time discovering the one-off experiences of the Great War. There are some trenches to be sure, but there are many open field battles too. Barrages can alter terrain. Gas attacks can flood a sector. Air dominance or reconnaissance can influence the fighting.

Stand with the French at Verdun. Charge forward with the Germans in Belgium and at the Marne. Follow the Americans as they slug their way into and through Belleau Wood. GWC offers sixteen historical scenarios including one introductory scenario for players not yet familiar with the general game system, a three players scenario and four scenarios with tanks. The replay value is high and a Random Scenario Generator adds even more depth. GWC will be expanded in upcoming sequels covering British, Russians, Austrians, Turks and Great War actions in Africa.

Comment by the Module Creator: I have the publishers consent to release this module. Please consider supporting Hexasim if you like this game, they produce high quality wargames on a variety of historical topics. You can find them under:

This module is using the GRID table found under https://steamcommunity.com/sharedfiles/filedetails/?id=1332172749.
All credit for the creation of this awesome table goes to CHRY. Thank you a lot for this brilliant addition to the world of TTS!
Popular Discussions View All (1)

Jakob van der Flup  [author] Dec 28, 2020 @ 5:21am
You need to subscribe to this item. Then it will be added to your TTS ingame collection. I recommend looking for a tutorial online (YouTube or some such) for a primer on how to use TTS.

mcfetridgejim Dec 24, 2020 @ 6:19am
I have Steam and Tabletop Simulator. How do I play this game? I cannot find a way to get from the workshop site to actually playing the game. Thanks in advance.

Jakob van der Flup  [author] Jul 19, 2018 @ 7:06am
This is a good question. In my experience you could probably write to Hexasim and ask if you could buy a replacement. But I don't think Hexasim will sell the scenario book alone as such!