Greenlight > Games > Ghostlight Ltd.'s Workshop
Greenlight is being retired. For more information on how to submit games to steam, refer to this blog post.
This item has been removed from the community because it violates Steam Community & Content Guidelines. It is only visible to you. If you believe your item has been removed by mistake, please contact Steam Support.
This item is incompatible with Greenlight. Please see the instructions page for reasons why this item might not work within Greenlight.
Current visibility: Hidden
This item will only be visible to you, admins, and anyone marked as a creator.
Current visibility: Friends-only
This item will only be visible in searches to you, your friends, and admins.
Agarest: Generations of War
Description Discussions56 Announcements13 Comments2397 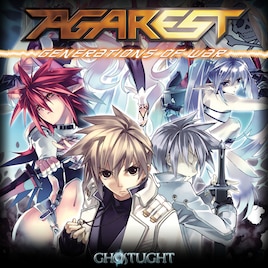 Ghostlight Ltd.
Offline
See all 469 collections (some may be hidden)

View Agarest: Generations of War in the store

It might come as little surprise to you , but while I’m on the subject of Agarest I’m very pleased to confirm that we will be releasing Agarest: Generations of War 2 on Steam later this year. This sequel to the bestselling original game introduces a whole new battle system as well as a raft of other features.

Once again we will be using the team over at Laughing Jackal to port this popular console JRPG to PC.

Now, as some of you may have noticed, Agarest 2 is not a dungeon crawler and has been released in the West :). So, those of you looking forward to finding out which dungeon crawler we’re bringing to Steam (as discussed in my previous blog) will be pleased to know that this announcement is still due to come on Thursday. So do keep your eye on the blog.

More on Agarest: Generations of War 2

THE THIRD INSTALMENT IN THE THRILLING AGAREST SERIES!

One day, the world was enveloped by a mysterious blinding light causing terrible destruction. The central continent, from where the light is believed to have originated, fell silent whilst demons began to spread throughout the world like a plague.

Sometime afterwards, a young man by the name of Weiss, suffering from amnesia, encounters the enigmatic Eva, from whom Weiss learns that he has committed the grievous sin of deicide. In order to atone for his crime, he must become the "Vessel" in which the power of the divinity he slaughtered will be stored. For it will be that power which will be used to resurrect the one whose life he stole.

For those who betray the divine will pay for their sins in the space which separates salvation and damnation, as will their progeny...

Revamped Battle System: Unlike the first two games of the series, Agarest 2 battles are fought with an engaging active grid-based battle system.

I'm pleased to let you all know that Agarest: Generations of War Zero is out now on steam http://store.steampowered.com/app/260130

•Numerous graphical improvements - including the addition of stunningly animated character portraits
•Vacation Days - improve the bonds with your party and unlock bonus items, costumes and locations
•New Races – a variety of new races are now available for your party
•Enhanced Towns – with more interactivity and additional areas to explore
•Card Skill System - customise the main character’s battle style and skills
•Extra Mode – a new hard difficulty unlocked by players who have cleared the first game, also allowing access to the world map, items and all characters from the original game.

And, of course, that doesn’t mention the new story set many years before the first Agarest game.

Agarest Zero also features new PC-exclusive features such as cloud saving, a full revamp of how DLC is managed within existing saves, plus the ability to decide which direction the controls are to be offset.

Read More
Description
At the dawn of time, the world of Agarest was plunged into a terrible war between the forces of good and evil. Entire races fought and died for their divine masters, ending in the total destruction of the world. The victorious Gods of light unified their defeated foes, creating a new world and sealing their broken bodies into an eternity of darkness.

With the ancient wars fading into distant memory, all have forgotten the evil slumbering beneath their feet, but the darkness remembers. It watches. It waits. The seal that held the evil for aeons is fading and war is again raging among the Kingdoms of Men.

Leonhardt, an officer in the Gridamas Army is disillusioned by the brutal war against the races of the Frontier. Coming across a young elven girl about to be killed by his men, Leonhardt betrays his own nation, selling his soul in an attempt to rescue her.

Now, Leonhardt must become the first to cross the continents since ancient times on a quest to defeat the forces of darkness and renew the seal. The dark road ahead is paved with betrayal, death and sacrifice, but the light of love and companionship will guide him on his journey.

• Control the battlefield in the Extended Turn Battle System; position your team and link characters for awesome combo attacks and use your skills and items to destroy your enemies!

• Collect hundreds of items and weapons, and harness the power of alchemy to vastly improve equipment

• Build the ultimate army of warriors and master Extra Skills, Special Arts and Over Kills to defeat colossal enemies!

• Command your destiny as your actions and decisions lead you to discover the many different possible game endings. Which path to victory will you tread?


New for the PC Build
The PC version of Agarest: Generations Of War will be based on the North American Xbox 360 release and will feature Aksys Games’ excellent English text translation but will retain the original Japanese voice overs. The PC version will also feature both gamepad and keyboard/mouse support along with Steam Achievements and dozens of both free and purchasable downloadable items and additional content.

Footage and screenshots are taken from the PlayStation 3 version.

Jason_c_o Aug 12, 2014 @ 12:39pm
@Jesse I always thought the point was for competed games. I *hate* seeing half-finished games on here... I want to vote on a final product, not something that may or may not be abandoned.

Jesse Mar 29, 2014 @ 10:43pm
I don't understand. I thought project greenlight was for indie game projects to get completed. This is a full retail game already. :|

TheWaifuWhisperer Feb 26, 2014 @ 2:17pm
I think this is my all time favorite game. I've even beat the true ending, and that was not easy in any sense of the word.

Agarest: Generations of War has been Greenlit and is now listed in the Steam store. For the latest information, purchase options, and discussions for Agarest: Generations of War, please see it on the Steam Store or in the Steam Community.
Visit Store Page
For more details Visit Community Hub
For latest discussions
If you really, really want to, you can continue to the Greenlight page. Information on this page may be out of date, since all the action has moved to the areas noted above.