Greenlight > Games > Gheeyom's Workshop
Greenlight is being retired. For more information on how to submit games to steam, refer to this blog post.
This item has been removed from the community because it violates Steam Community & Content Guidelines. It is only visible to you. If you believe your item has been removed by mistake, please contact Steam Support.
This item is incompatible with Greenlight. Please see the instructions page for reasons why this item might not work within Greenlight.
Current visibility: Hidden
This item will only be visible to you, admins, and anyone marked as a creator.
Current visibility: Friends-only
This item will only be visible in searches to you, your friends, and admins.
GoD Factory: Wingmen
Description Discussions12 Announcements22 Comments572 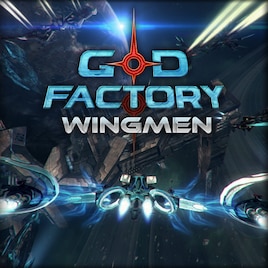 Gheeyom
Online
See all 69 collections (some may be hidden)

GoD Factory: Wingmen will be out on August 29.

If you do pre-order, you get the following:

- 2 keys for the price of one, so you can give a copy to a friend
- Unique bright bronze, silver and gold skins for your ships
- The original soundtrack by Dan and Frank Johansen (my personal favorite extra!)
- A 40 pages artbook pdf by our lead artist, Étienne Vanier!

We're far from out of the woods though, now the big challenge it to get people talking about the game. So please share the store page to your friends and make some noise! :D

Today is quite a big deal for us, as we’re about to launch the public beta to GoD Factory: Wingmen! Please allow me to share a reflection for the occasion.

When Nine Dots Studio was founded, the intent was, among other things, to make games that have a message associated to them, something stronger and more relevant than “beheading aliens by dual-wielding chainsaws is cool” (although let’s be honest, there’s some cool factor there). The thing is, it’s harder to deliver a message without making it feel forced when you don’t have a game based on a narrative experience. Multiplayer games are even trickier to pull off, because player interactions are always a wild card.

So one of the most important pillars behind the game’s design is the necessity for cooperation. To achieve victory, you have to work with your team. In a way, this is the message behind the game and we wanted to convey this message through the game mechanics. This can be observed in the way we designed weapons, abilities, objectives and even the aesthetic. We’ve added as many incentives as we could to make players stick together. We quantify in-game rewards by calculating usefulness rather than going with a simple equation of Kill/Death ratio. In fact, the game’s complexity could either play in our favor or against us depending on whether or not our community members act as mentor to newcomers rather than being hostile to them. We’ve seen what toxic communities are like and we know that they quickly get in the way of a positive experience.

So all in all, a large part of the game’s experience depends on you, the players. We can’t force you to be good to each other, we can only provide incentives. But beyond that, we hope that the game’s message will come through and that cooperation will manifest itself in a more profound way than just game mechanics. We hope that you’ll make friends, that you’ll share positive experiences and that you will learn from each other, because that’s what gaming does best.

Have fun with your squad out there :) and if you want to take part in our community, feel free to join our forum and the Razer Comms GoD Factory official group.

Read More
Description
GoD Factory: Wingmen is a 4v4 competitive space combat game in which the goal is to destroy the enemy's carrier ship while defending your own. The game will cost $20 and we'd like to support it for years to come with additional content and DLC, both paid and free.

- Build your gunships part by part, changing their look, stats and abilities
- Four playable species with their own unique parts to choose from
- Intense dogfights that require to be up close to your targets
- Cooperation is absolutely necessary to win
- Many different strategies and roles to play in a group
- Multiple layers of complexity to ensure there's always more to learn
- Oculus Rift + Joystick = Madness? We'll see!

As mentioned above, the goal of the game is to destroy the enemy's carrier ship. However, these carriers happen to be 13km long. To take apart such gargantuan structures, you need to coordinate attacks with your allies to destroy vulnerable areas.

In game terms, in order to win the enemy's carrier must lose 6 integrity points before you do. These integrity points can be lost in two ways: either by being shot at by a carrier's main cannon or by having one of its major component destroyed by the players. Each of those components you destroy have a different effect, aside from damaging the ship's integrity. For instance, if your ammo depot is destroyed you won't be able to restock over 60% of your ammo capacity when docking your carrier, while if your Communication Tower you will stop receiving alerts when your Carrier is attacked. For a complete list of effects, go see this blog post: {LINK REMOVED}http://ninedotsstudio.com/2012/11/15/the-carriers-in-god-factory-wingmen/?preview=true&preview_id=522&preview_nonce=b0e2addbad

The fact that the carriers also fire at each other means that it is possible to win a game either offensively or defensively. For instance, a team could just damage one or two parts then protect their own carrier while their carrier finishes the job. It also means that it is impossible for a match to drag on forever. A match will typically last between 12 and 16 minutes and it is not possible for a match to last more than 25 minutes.

At the end of every match, win or lose, you are given a score which is then used to gain access to new parts. There are unique unlock trees for every species, but some parts can be exchanged from a species to another. You could use a human machine gun on a Guantri ship for instance.

Building your ships require to balance weight, energy consumption and heat capacity. There are many pieces to choose from, divided in Main body, Cockpit, Wings, Thrusters, Power Core, Shield Generator, Main Computer, Weapon Control Unit, Main Weapon, Wing Weapons and Special ability devices. Most of these parts have an influence on how your gunship looks and all of them have a significant impact on how your ship is played.

You also get to bring two ships in a match. While one is out to fight, the other one is docked, repairing its shield over time. This allows for both versatility and deeper resource management. Not only that, but the player can ask other players to borrow his teammates gunships. This features allows to explore some builds different from your own without having to invest the hours required to unlock and buy all the parts required. One must be careful though, since when a gunship is destroyed, it can't be re-used for the rest of the match. Once the player loses two ships, he can only use drones, which are much weaker than the custom gunships they brought to the fight.

Brand, another project from us on Greenlight:
http://steamcommunity.com/sharedfiles/filedetails/?id=92946396
< >
572 Comments

Shukketsujuu Aug 28, 2014 @ 2:42am
i've never followed this game before today, but i can say one thing so far *pause for dramatic efect* FINALLY a dog fight spaceship game that gets it right.

Vesperion Aug 1, 2014 @ 3:40pm
I just checked the "Soon at Steam" side and what did i see? GoD Factory will finaly come i´m so happy that i can´t wait for the 29th to play it already. So my montly money spending is already clear for me all i just don´t know so far is who of my friends i will give the 2nd key from the pre-order buy^^

sir-stabbalot Jul 27, 2014 @ 4:24pm
That is a great relief, other developers could definitely learn a thing or two from you.

Gheeyom  [author] Jul 22, 2014 @ 8:57am
Hi Jade! I'm glad you enjoyed your experience. To be honest we do want to make DLC for the game, but only becasue we want to expand the possibilities. We don't want to sell more powerful items, we just want to add stuff, like a new species, vanity items to change your look in unique ways, new weapons with weird behaviors, etc.

However, the game will contain over 300 unique pieces to choose from without any DLC, enough content to keep you going for a long time with or without DLC, and we don't intend to have paid map packs and stupid stuff like taht since it divides the userbase.

sir-stabbalot Jul 20, 2014 @ 4:20pm
I played the game during the kickstarter live stream, and it was some of the most fun I have ever had. If Wingmen doesn't wind up free (which it wont) I will be more than happy to buy it, as long as the developers do not get involved in dlc and in game purchases, because that just ruins a game in my opinion.

Gheeyom  [author] Jul 14, 2014 @ 7:39am
I know that players should understand what they are getting when they buy a game in early access, but sadly it is not always the case. We want to do everything we can so that players feel like paying us gave them their money's worth.

If we hadn't signed a deal with a publisher, we would have tried to get some funds with Early Access and I do think it can be a very viable way to do business, but it's rather risky these days, not that many Early Access games gain the traction they deserve and need to thrive.

There are multiple reasons why we aren't in Early Access. First, because we see Early Access as a way to get funding to finish the game. Luckily for us, we signed a deal with Bandai Namco and we are now sufficiently funded to ensure that we bring the project to completion.

There is also the matter that Early Access can actually hurt a game's launch. Early Access titles do not receive the same visibility as "full fledged" launched and some players come by, try the game in its unfinished state, then leaves with a bad impression. These same players would have appreciated their experience more if they had tried it in a more polished state.

Vesperion Jul 12, 2014 @ 8:09am
What me wonders a bit is why the game doesn´t is in the Steam Shop as "Early Access" Title which can be bought in the current state. As much info as i could find so far about the game in Forums and Discussions it seems already pretty far in case of the development status + the fact that it gave Beta Times already. Does it have any particular reason why you still keep the game "away" from Steam or does it whit anything else to do?

GoD Factory: Wingmen has been Greenlit and is now listed in the Steam store. For the latest information, purchase options, and discussions for GoD Factory: Wingmen, please see it on the Steam Store or in the Steam Community.
Visit Store Page
For more details Visit Community Hub
For latest discussions
If you really, really want to, you can continue to the Greenlight page. Information on this page may be out of date, since all the action has moved to the areas noted above.