Greenlight > Games > bmitsoda's Workshop
Greenlight is being retired. For more information on how to submit games to steam, refer to this blog post.
This item has been removed from the community because it violates Steam Community & Content Guidelines. It is only visible to you. If you believe your item has been removed by mistake, please contact Steam Support.
This item is incompatible with Greenlight. Please see the instructions page for reasons why this item might not work within Greenlight.
Current visibility: Hidden
This item will only be visible to you, admins, and anyone marked as a creator.
Current visibility: Friends-only
This item will only be visible in searches to you, your friends, and admins.
Dead State
Description Discussions36 Announcements3 Comments1625 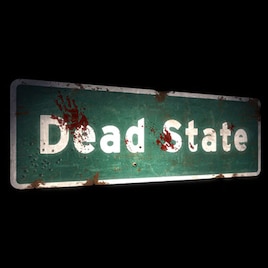 bmitsoda
Offline
See all 398 collections (some may be hidden)

View Dead State in the store

We’ve been working hard all summer to add functionality to Dead State’s build and to get our demo ready for PAX. You’ll be able to see both the progress we’ve made and get a look at the WIP demo which showcases the first two days of Dead State. We can’t wait to show you what we’ve been up to. Swing by the booth and meet Annie, Christina, Oscar, or Brian, and we’ll give you a guided tour of the demo. Being a part of the Indie Megabooth has been a huge goal for us and we’re in good company – there are dozens of indie developers to come see in the booth this year (we will be just as excited to see their work as some of you will be to see Dead State.)

For those who can’t make it to PAX, fear not, as we will make sure that between press and our YouTube channel that you get a good look at the state of Dead State. Indie Megabooth and PAX coverage should start appearing around the end of August. Expect a lot more information about Dead State from now on. We’re really excited to be able to finally show off our progress on Dead State to the gaming community, so please look for us at PAX and keep watching our forums and our Kickstarter page for the latest info on Dead State!

Read More
Dead State on Greenlight (Or Why We're Not Just Another Zombie Game)
April 11, 2013 - bmitsoda

Thank you to everyone who voted for us so far! We're quickly approaching the Top 50.

For those of you who are wondering if Dead State is just another zombie game, we urge you to check out our site and our FAQ to see what we're about. We like to think of Dead State as the "zombie game about humans" - which is to say, while you may see zombies in the combat portion, most of the game is about managing your survivors, making decisions about human lives, and dealing with the personality conflicts in your group and other groups. Zombies are an obstacle - humans are the major threats in our game. Branching dialogues, tons of characters, and lots of hard choices - that's what Dead State is all about. We hope to break the cycle of "kill zombies" and bring the genre back to the original emphasis - the human element.

For questions or comments, feel free to hop on our forums. More than likely we have answered many of the questions here and we're happy to provide you with any info you need to make a decision for Greenlight. Thanks again for your support.

As society is beginning to fall apart, the player must organize a scant handful of allies, working on fortifying a shelter, scouting for food and supplies, making uncertain alliances with others, and attempting to hold together a group as humanity teeters on the brink of extinction. A full-fledged RPG featuring shelter building and management, turn-based tactical combat, and reactive story and dialogue with an emphasis on survival at any cost.

Attract new allies, scavenge food and supplies, and protect your shelter at any cost. Do you have what it takes to lead a desperate group through a crisis? This is your chance to find out.
< >
1,625 Comments

Materloo Mar 2, 2016 @ 11:55am
I see potential in the game, but this "combat turn system" is a piece of junk. Are you kidding? The zombie will stand there, and waiting for my character until open the door with a crowbar? Dafaq?

Dead State has been Greenlit and is now listed in the Steam store. For the latest information, purchase options, and discussions for Dead State, please see it on the Steam Store or in the Steam Community.
Visit Store Page
For more details Visit Community Hub
For latest discussions
If you really, really want to, you can continue to the Greenlight page. Information on this page may be out of date, since all the action has moved to the areas noted above.