Greenlight > Games > Kupo Games's Workshop
Greenlight is being retired. For more information on how to submit games to steam, refer to this blog post.
This item has been removed from the community because it violates Steam Community & Content Guidelines. It is only visible to you. If you believe your item has been removed by mistake, please contact Steam Support.
This item is incompatible with Greenlight. Please see the instructions page for reasons why this item might not work within Greenlight.
Current visibility: Hidden
This item will only be visible to you, admins, and anyone marked as a creator.
Current visibility: Friends-only
This item will only be visible in searches to you, your friends, and admins.
Epic Battle Fantasy 4
Description Discussions20 Announcements6 Comments1421 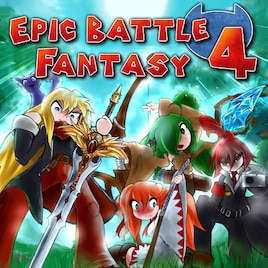 Kupo Games
Offline
See all 126 collections (some may be hidden)

I'm not sure if you guys got alerted about it, so I made this announcement just in case.
Here's the store page: http://store.steampowered.com/app/265610/

Hoping the launch goes smoothly! I'll be glad to finally have this massive project out of the way. D:

Read More
Description
Release date: Early 2014
Go on a huge turn-based RPG adventure; play as a team of four unlikely heroes and save the world from an uncertain future!

FEATURES
Build up your characters and battle foes:

Explore the world and loot treasure:

TRY IT OUT
A free version of Epic Battle Fantasy 4 is available online, check it out:
http://www.kongregate.com/games/kupo707/epic-battle-fantasy-4

The first 3 games in the series are all completely free to play, but you don't need to play them to enjoy this one.

How the Steam version will differ from the free web version:
The Steam version will include a new battle area, with stronger versions of bosses, long endurance/survival battles, and some bosses returning from the previous games. New equipment and achievements will be awarded for completing these challenges.

The Steam version will also include all premium content (or DLC) available in the web version, and will not suffer from the restrictions of web browser games; It'll have fullscreen support, no ads, no audio compression, it won't need an internet connection, and it'll have some interface improvements.

How bout helping Matt out?
Anti-Fun

Axer128 Mar 20, 2014 @ 7:07am
This game is awesome. It got greenlit because it deserved too. Over a thousand comments, likely as many votes, and one of the top ranked rpgs on kongregate (over 4million plays and average rating 4.46/5). Yea it very much deserved to be on steam.
Yea lots of poor quality games get greenlit, this isn't one of them.

Epic Battle Fantasy 4 has been Greenlit and is now listed in the Steam store. For the latest information, purchase options, and discussions for Epic Battle Fantasy 4, please see it on the Steam Store or in the Steam Community.
Visit Store Page
For more details Visit Community Hub
For latest discussions
If you really, really want to, you can continue to the Greenlight page. Information on this page may be out of date, since all the action has moved to the areas noted above.