Greenlight > Games > Scrilla Jones's Workshop
Greenlight is being retired. For more information on how to submit games to steam, refer to this blog post.
This item has been removed from the community because it violates Steam Community & Content Guidelines. It is only visible to you. If you believe your item has been removed by mistake, please contact Steam Support.
This item is incompatible with Greenlight. Please see the instructions page for reasons why this item might not work within Greenlight.
Current visibility: Hidden
This item will only be visible to you, admins, and anyone marked as a creator.
Current visibility: Friends-only
This item will only be visible in searches to you, your friends, and admins.
Divekick
Description Discussions17 Announcements9 Comments1783 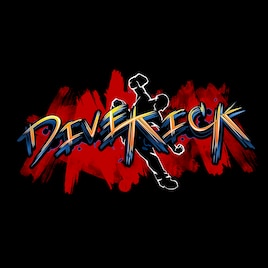 Scrilla Jones
Offline
See all 51 collections (some may be hidden)

View Divekick in the store

Hey all, we released Divekick to the world on Steam and are super excited to finally be playing online with people worldwide.

Here's what some of the reviews are saying:

“If you were afraid that the idea of a fighter that's controlled with just two buttons was a joke that would get old quickly, then you clearly haven't played much Divekick!.”
9 / 10 – Destructoid

“Simply put, Divekick is a fighting game that you can — and should! — play even if you're not usually good at fighting games.”
A- – Gaming Age

“It has captured everything we love about fighting games in a mere two buttons. Simply put, it’s genius. This is no joke.”
8 / 10 – Cheat Code Central

We just got back from EVO and here's a link to our stream archives from the show floor:

All told these clock in at over eleven hours of Divekick goodness. We turned this livestream into an impromptu Greenlight Vote Drive, and the results were great! Thanks to all the new voters/followers who joined us on the stream last weekend.

Read More
Description
Release date: SUMMER 2013
At Iron Galaxy we love fighting games, but to the average fan most of what makes them fun is hidden behind a never-ending series of input combinations they have to memorize. Divekick is a fighting game that distills the essence of the genre into just two buttons with no directional movement. When you play Divekick, it will open your mind to how much depth a single move actually has, and introduce (or re-enforce) skills fundamental to the genre: mind games, spacing, timing, and quick reactions.

Divekick has just two buttons. Dive (into the air) makes your character jump straight up. Kick causes your character to fly foot first at a downward angle. If you press Kick on the ground, you can jump away from your opponent. Utilizing these moves, the first hit will win the round, and the player that wins five rounds first wins the game. It’s pure adrenaline, awareness, and outsmarting your enemy.

Why should you care about Divekick? Fighting games have become a very exclusive genre as time has worn on. New techniques and subsystems are added to each game, layering on the amount of things you must learn before you can compete. Divekick attempts to strip all of this away to help reintroduce people to the genre they used to love, but grew apart from as it became more and more complicated.

My dreams are finally coming true!

Divekick has been Greenlit and is now listed in the Steam store. For the latest information, purchase options, and discussions for Divekick, please see it on the Steam Store or in the Steam Community.
Visit Store Page
For more details Visit Community Hub
For latest discussions
If you really, really want to, you can continue to the Greenlight page. Information on this page may be out of date, since all the action has moved to the areas noted above.