Greenlight > Games > Red Thread Games's Workshop
Greenlight is being retired. For more information on how to submit games to steam, refer to this blog post.
This item has been removed from the community because it violates Steam Community & Content Guidelines. It is only visible to you. If you believe your item has been removed by mistake, please contact Steam Support.
This item is incompatible with Greenlight. Please see the instructions page for reasons why this item might not work within Greenlight.
Current visibility: Hidden
This item will only be visible to you, admins, and anyone marked as a creator.
Current visibility: Friends-only
This item will only be visible in searches to you, your friends, and admins.
Dreamfall Chapters: The Longest Journey
Description Discussions30 Announcements4 Comments2364 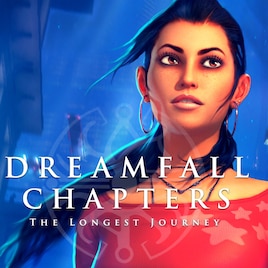 View Dreamfall Chapters: The Longest Journey in the store

Why not join the official Red Thread Games Steam group, and play with the friendly & personable RTG crew and fellow backers, followers & fans? Yeah, it's tempting, isn't it.

Taken from the second chapter of the game, the walkthrough follows one of our three playable characters — Kian Alvane — as he escapes from Friar's Keep, a prison in the magical world of Arcadia. The video features a commentary by design director Martin Bruusgaard and creative director Ragnar Tørnquist.

Check it out over on GameSpot right now.[gamespot.com]

Enjoy the show! And please add your comments and feedback on GameSpot, Facebook, Twitter or right here on Steam!

Read More
Description
Release date: November 2014
The Award-Winning Saga Continues!
Dreamfall Chapters: The Longest Journey is a 3D adventure game for Mac, Linux and Windows PC that takes the player on a darkly magical journey across the twin worlds of Stark and Arcadia; from a futuristic cyberpunk vision of our world, to a high-fantasy realm of powerful sorcery and dangerous beauty.

The Story
The world of Arcadia exists in parallel and balance with ours. It is a world of magic and chaos, a world that acts as a counterweight to the world of science and order. The Balance between the twin worlds is watched over by the Guardian, who channels the energies of Chaos and Order between Arcadia and Stark, our world.

Some people are able to move freely between worlds. These very special and gifted individuals are called Shifters. There are not many of them, and those who can Shift keep it a secret to the world, in order to protect the precarious Balance.

A few people can travel in a different way. They dream themselves into other worlds, existing in two places at once. These individuals are called Dreamers.

At this point, there is only one known Dreamer in the twin worlds: Zoë Castillo.

The Game
Dreamfall Chapters continues and concludes the Dreamer Cycle and the gripping story of Zoë, the Dreamer.

Revisiting familiar locations and characters, and introducing new sights and sounds, new faces, new game mechanics, new thrills and challenges, Dreamfall Chapters takes players on an epic journey -- from a dystopian cyberpunk future of Stark, through the mysterious and dreamlike Storytime, to the magical landscapes of Arcadia.

Dreamfall Chapters is a game made for both fans of the saga and new players who are looking for an adventure unlike any other: one that crosses the divide between two completely different and original worlds.

With this latest game in the saga, we aim to recapture the heart and soul of The Longest Journey and to improve on the immersion and game mechanics of Dreamfall in order to bring you a fitting, satisfying and emotional conclusion to the Dreamer Cycle.

* Experience a deep and complex storyline that continues the epic saga of The Longest Journey and concludes the Dreamer Cycle that began with Dreamfall
* Explore a beautiful, rich, detailed, interactive and living world that mixes a cyberpunk vision of the future with magical fantasy, along with a broken and decaying dreamworld
* Play as three different characters, all on journeys across worlds, through life, and into their own hearts and souls
* 3D point-and-click interface and engaging puzzle gameplay designed for fans of adventure games
< >
2,364 Comments

Maybe the graphics could be improved with current technology, but that's not the important part of the game. The story is just wonderful.

Dreamfall Chapters: The Longest Journey has been Greenlit and is now listed in the Steam store. For the latest information, purchase options, and discussions for Dreamfall Chapters: The Longest Journey, please see it on the Steam Store or in the Steam Community.
Visit Store Page
For more details Visit Community Hub
For latest discussions
If you really, really want to, you can continue to the Greenlight page. Information on this page may be out of date, since all the action has moved to the areas noted above.