Greenlight > Games > zede05's Workshop
Greenlight is being retired. For more information on how to submit games to steam, refer to this blog post.
This item has been removed from the community because it violates Steam Community & Content Guidelines. It is only visible to you. If you believe your item has been removed by mistake, please contact Steam Support.
This item is incompatible with Greenlight. Please see the instructions page for reasons why this item might not work within Greenlight.
Current visibility: Hidden
This item will only be visible to you, admins, and anyone marked as a creator.
Current visibility: Friends-only
This item will only be visible in searches to you, your friends, and admins.
Planet Explorers
Description Discussions73 Announcements11 Comments2131 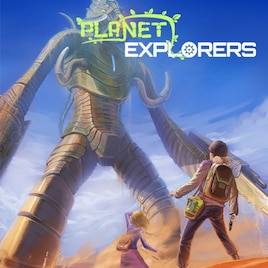 zede05
Offline
See all 603 collections (some may be hidden)
Kickstarter

View Planet Explorers in the store

Thanks to everyone for your support in getting us this far! We're be sure to repay the favor and make Planet Explorers into a great game to the best of our ability!

Hey everyone, sorry for not updating here for so long, we've been super busy getting features into the game. Now, after months of work, we've released Alpha 0.72. If you have preordered already, you can download it here: http://planetexplorers.pathea.net/download/

We've also released a new demo based on Alpha 0.72 for PC, Mac, and Linux. So go and try it out if you haven't already: http://planetexplorers.pathea.net/download/

For users without opencl compatible graphics cards due to whatever reason (outdated driver, unsupportive manufacturer, incompatible setup, etc.), please go to options in the launcher and change to cpu under opencl calculation, then launch the game. If your game hangs at 100% or fails to load, it’s most likely due to opencl.

Now we can all move on to a0.75. The key features we’re aiming for a0.75 are voxel water (dynamic will probably be a0.8), new water shader, decals for the creation editor, lod for the building blocks, new story segments, rainforest biome, new ai spawning based on seeds in Adventure Mode, and able to export vehicles in multiplayer. We’re aiming to release this build in late February.

That build will also be the Steam Early Access build. If you want to preorder right now, go right ahead, as you'll get a Steam key when we release on Steam. http://planetexplorers.pathea.net/order/

Read More
Description
Release date: Early 2014
Game Overview
Planet Explorers is an open world smooth voxel based sandbox adventure rpg game set on a distant planet. The game uses a new OpenCL system based on the Unity 3D engine to allow players to change the terrain in anyway, create new objects such as weapons, vehicles, objects, and do it anywhere. Currently, it is in alpha 0.52, which you can download at {LINK REMOVED}pathea.net and give it a test drive!

In Planet Explorers, it is the year 2287, one of the first colony ships sent out by Earth arrives at the planet Maria, in the Epsilon Indi Star System. During its landing sequence, something appears in front of the massive ship that causes it to lose control and crash into the planet. Some of the colonists survive in lifeboats, but what they find is an unforgiving land filled with creatures ready to outlast the visitors from Earth. Now the survivors must explorer, gather, build, create, fight, and ultimately, build a new home.

In single player there are 3 distinct selections

Multiplayer will allow Local Area Network and player hosted servers. It will feature several modes but some are still on the drawing board or going through technical trials so the final result is still in flux. Players playing multiplayer should be able to bring at least one of their created objects into multiplayer games, be it a sword, gun, or vehicle.

Game Direction
We at Pathea Games have been working on Planet Explorers for a little over a year now. From the start, we set out to create an adventure in which the player will be able to control many things. For example, if there's a mission to go save someone from an enemy camp across a canyon, in PE, you will be able to build a bridge to cross it, or a plane, or make a giant robot (yes, this is actually our end goal), etc. Another thing we wanted was a storyline with set goals. Open ended sandbox games are great, but so are more focused games. We're big space exploration fans, so the story will be practical, somewhat realistic, and to the point. Finally, we wanted to make something fun and somewhat original, that's still up in the air, but we hope we're getting close!

If you have questions or bug reports about the alpha, visit our board!
Board: {LINK REMOVED}http://board.pathea.net/
< >
2,131 Comments

Nabs Jun 24, 2014 @ 3:22pm
this is very nice game but i am having trouble with building because of the complex camera controls and will there be a first person mode

Planet Explorers has been Greenlit and is now listed in the Steam store. For the latest information, purchase options, and discussions for Planet Explorers, please see it on the Steam Store or in the Steam Community.
Visit Store Page
For more details Visit Community Hub
For latest discussions
If you really, really want to, you can continue to the Greenlight page. Information on this page may be out of date, since all the action has moved to the areas noted above.