Greenlight > Games > Ambient Studios's Workshop
Greenlight is being retired. For more information on how to submit games to steam, refer to this blog post.
This item has been removed from the community because it violates Steam Community & Content Guidelines. It is only visible to you. If you believe your item has been removed by mistake, please contact Steam Support.
This item is incompatible with Greenlight. Please see the instructions page for reasons why this item might not work within Greenlight.
Current visibility: Hidden
This item will only be visible to you, admins, and anyone marked as a creator.
Current visibility: Friends-only
This item will only be visible in searches to you, your friends, and admins.
Death Inc.
Description Discussions3 Announcements4 Comments629 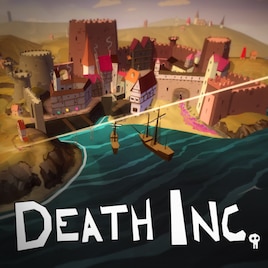 Ambient Studios
Offline
See all 178 collections (some may be hidden)
Recent Announcements View All (4)
We are Greenlit!
April 17, 2013 - Ambient Studios

Thank you everyone for your votes - we're so excited about being Greenlit today.

If you want to show your support right now please consider purchasing the Death Inc. alpha. This also serves as a pre-order for the full game and there are a whole bunch of other goodies available. We can officially say, for the first time, that your pre-order will include a Steam key on release!

Check out the options here http://www.deathincgame.com

We're very excited to announce that the Death Inc. Alpha is now available! You can get it here:

Prices start at $10. For this you'll get instant access to play the game now and a pre-order for the full game on release (which will retail for approx $20), as well as exclusive forum access. When the game is finally released on Steam, we'll provide you with a Steam Key, too.

We have a selection of tiers to suit all tastes and budgets: Name a villager or a cow, get a cool 'old school' boxed Special Edition, an amazing art book, even help design an in-game pub or become a Nobleman with your own colours, liveries and lands. And much more!

We are so proud of how much the game has come on even in the last month: it's crazy, beautiful and just so much fun. By supporting us now you'll get access to all the developments of the game all the way up until release, and of course you'll receive a full version of the game when it's finished. You won't be disappointed.

Read More
Description
Release date: October 2013
Ever thought there must be more to the afterlife than keeping gravediggers and veil-makers busy?

Death Inc. is a unique hybrid of real-time strategy, god game and business simulation, harking back to some of the Bullfrog classics like Theme Park and Dungeon Keeper. It'll be released simulataneously for Windows, Mac and Linux.

You are Grim T. Livingstone, Reaper, and it's your task to spread the bubonic plague throughout 17th century England with your horde of infected minions. Harvest the souls of the living to build your horde, use them to expand your business empire and strive to become the greatest Reaper the world has ever endured.

Like any small-time Reaper, you'll start out modestly: Parish villages, farms, homesteads. People of no consequence, with simple souls. Easy fodder. As Death Inc. expands and more resources become available you'll be able to tackle more strategic targets, like noblemen's castles, seats of power, even entire cities. The Great Fire Of London in 1665, for example, was no accident.

Get The Alpha!
Check it out! You can buy the Alpha for Death Inc. (which also serves as a discounted pre-order for the final game) here: {LINK REMOVED}http://www.deathincgame.com.

If you buy it now, we'll give you a Steam Key too when the time comes!

Control
The game features a unique 'freehand' paintbrush-like control system that allows for fluid control without sacrificing precision or finesse. You'll be able to use both broad brush strokes and fine-detailed pencil-like lines. This allows you to simply paint down your orders and watch them unfold in realtime. Importantly, you'll never lose control and can always fine-tune your units' behaviours if you want to.

Physics puzzles
As a Reaper, you've earned the right to do what you want. Levels are neither an open plan space nor a linear path, but a multi-path map with twists, turns, choke points and many routes to victory (or defeat). Each level is a sandbox in its own right. Physics puzzles and traps dot the landscape and can be solved, utilised or perhaps even circumvented, leading to huge replayability and choice.

Special Abilities
What game about the bubonic plague in 17th century England is complete without a wide and varied array of special abilities? Terrorise the neighbourhood with plague rats, unleash long-range pestilence with pigeon pox or cause a mass evacuation (so to speak) with the wedding-ruining norovirus brunch.

Meta Game
Apart from all the reaping, you'll have a hand in running Grim T. Livingstone's business concerns. Starting off in the basement, you'll be able to grow your business using harvested souls as currency. Hire underlings to increase productivity and complete secondary challenges. Improve the decor with R.I.P. bedsheets and coffin clocks. Everything you do will add up to a more productive workforce.

Units
As you might expect in an RTS, there is a wide and varied selection of unit types, including villagers, vigilantes, giants, and plague doctors. Plus there are archers! Cavalry! Siege weapons!

Each unit (or villager) is individually simulated and each has their own goals and choices. Individually they have desires to fight, flee, destroy and more, but when put together they behave like a fluid and form a fascinating and deep crowd control simulation. Just like a torrent of water, your infected horde will flood through towns and villages smashing though obstacles and breaking the very defences built to stop you!

The most important thing for any Reaper, however, is to never feel out of control.

The best bit about running a company staffed by victims of the plague? Never having to give sick leave.
< >
629 Comments