Greenlight > Games > alloplastic's Workshop
Greenlight is being retired. For more information on how to submit games to steam, refer to this blog post.
This item has been removed from the community because it violates Steam Community & Content Guidelines. It is only visible to you. If you believe your item has been removed by mistake, please contact Steam Support.
This item is incompatible with Greenlight. Please see the instructions page for reasons why this item might not work within Greenlight.
Current visibility: Hidden
This item will only be visible to you, admins, and anyone marked as a creator.
Current visibility: Friends-only
This item will only be visible in searches to you, your friends, and admins.
Cell HD: emergence
Description Discussions2 Announcements1 Comments169 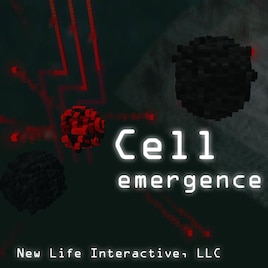 alloplastic
Offline
See all 27 collections (some may be hidden)

Due to continued interest, we're extending the $0.99 price on Desura for another week. Seems silly to raise the barrier of entry to the game at this point. Please spread the word if you know any potential reviewers who like abstract experimental games...

Read More
Description
Release date: Version 1.1 available today
What makes Cell different from other cube- or voxel-based games is that every block of color has game state and is being simulated at 13 FPS. It's a fast arcade shooter made from "living" materials, which makes for a complex, sometimes disorienting experience... but a rewarding one, we think, based on the experiences of players who have given it a try.

Some players recoil from this game. We have gotten zeros in customer reviews, and even a heartfelt "f___ you" from one online game reviewer (who only played a few levels). But we also get high scores from players who persevere. As an example, the 8.3 score at one online store derives from a distribution that looks like this:

So there is a large hump at the high range, pulled down by some players who have a bad time. We feel that we've created a title with substance, despite admittedly struggling to draw players into the unusual gameplay.

The updated version of the game addresses this through the addition of visual tutorial screens, which explain terminology and the HUD, the two main barriers new players have faced when learning the game. A fact lost on many players of the original release is that the winning condition of every level is defined explicitly in the HUD, meaning that a player can ignore all of the help text and story and still know what the objective is. By making this explicit during the tutorials, we hope to eliminate misunderstandings which can make the game seem mystifying.

That said, new players should not expect to be treated well by this game. The strongest adjective the game will use to describe your success is "adequate," and if you fail -- well, you're "deleted" and replaced with a better unit. This serves the story, however. You are a medical nanobot, born of a genetic algorithm designed to evolve cures to new diseases. You suffer, but you live the life of a small robot that becomes, by degrees, more capable and finally intelligent and free.

So the rudeness players might feel serves a purpose, though one could question the wisdom of simulating the emotional life of a nanobot. Suffice it to say that this game's appeal derives from its austere challenges, reminiscent of '80s arcade games. (Remember -- when games were designed to steal your quarters?) It also -- we hope -- has that alien feel of those first arcade games, which perpetually found surprising new ways to use 2D interactive space.

The world of Cell is a strange creation, made from a 3D "dynamic voxel" space, but when it succeeds is has some of the charm of those old games, we think. Adjectives reviewers use to describe it include "elegant", "amazing," and even "beautiful." The unique control scheme, voxel-level behaviors, and germ warfare conceit are all attempts to evolve a new type of gameplay space. We're asking for support from any of you who value adventurous experimentation in game design and game technology. We think the one thing "Cell" offers in spades is innovation -- and hope you agree that this can be a driver of sales as well as design thinking.

Pleae check out the game's videos, web site, and the game itself, which is available from several online stores listed on web site below... and which can also be found for free on various Russian warez sites. :-).

Cell HD: emergence has been Greenlit and is now listed in the Steam store. For the latest information, purchase options, and discussions for Cell HD: emergence, please see it on the Steam Store or in the Steam Community.
Visit Store Page
For more details Visit Community Hub
For latest discussions
If you really, really want to, you can continue to the Greenlight page. Information on this page may be out of date, since all the action has moved to the areas noted above.