Greenlight > Games > johan's Workshop
Greenlight is being retired. For more information on how to submit games to steam, refer to this blog post.
This item has been removed from the community because it violates Steam Community & Content Guidelines. It is only visible to you. If you believe your item has been removed by mistake, please contact Steam Support.
This item is incompatible with Greenlight. Please see the instructions page for reasons why this item might not work within Greenlight.
Current visibility: Hidden
This item will only be visible to you, admins, and anyone marked as a creator.
Current visibility: Friends-only
This item will only be visible in searches to you, your friends, and admins.
Dominions 3: The Awakening
Description Discussions9 Announcements1 Comments985 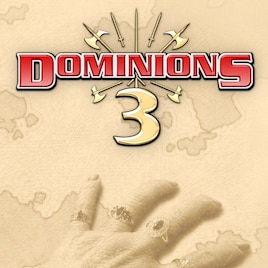 johan
Offline
See all 23 collections (some may be hidden)

View Dominions 3: The Awakening in the store

Dominions is coming to steam! I had just about given up on that happening, so it was a pleasant surprise.

A huge thank you to everyone that voted on Dominions and commented something nice about it!

The Old God has left the world and the pretenders are awakening and coming out from hiding. You start the game by designing one of the pretender gods that will compete for true ascension to godhood. The type of god can range from a magically powerful arch mage to an ancient kraken or a mystic monolith that people pray to.

A large variety of spells, monsters and special abilities is something this game definitely has. There are more than 60 different nations, 1500 different units, 600 spells and 300 magic items in the game. Dominions 3 is a highly detailed game and a 300 page pdf manual is included with the game.

The game is already completed and you can find a demo on our website. You can also buy the game from there. If you buy the game on Desura you'll be able to activate the game on steam too if it gets through the greenlight process.

"Superb, Deep Strategy in a Well Realized Fantasy World"
"The use of world mythology rather than the clichés of High Fantasy, and the complex but completely non-intrusive histories of the nations of Dominions 3 over the game's three eras give the game a kind of moral maturity: there are knights in shining armor in this game, but doesn't mean that they're the “good guys,” and there are nations that practice human sacrifice (in the forms of “Blood Sacrifice” and “Blood Magic”), but that doesn't make them “Chaotic Evil.”"
Play this thing
{LINK REMOVED}http://playthisthing.com/dominions-3-awakening

"OK, let’s get one thing clear. A lot of people will not appreciate Dominions 3"
Troy Goodfellow, Flash of Steel.
{LINK REMOVED}http://flashofsteel.com/index.php/2007/01/05/on-site-review-dominions-3-the-awakening/

"There are very few games that show you as much as you'll see here- a nearly infinite variety of rising gods and dying empires and a fat man with a magic belt- and no games that do it with the focus, depth, and extraordinary economy of Dominions 3."
Computer Games Magazine (4.5/5 + Editor's Choice award)

Videos
The long video on this site was not made by Illwinter. It's the first part of a let's play Dominions 3 series made by Das24680. You can find the rest of the videos on his Dominions 3 youtube channel:
http://www.youtube.com/playlist?list=PLGB6RkFB7ZmPy9ezc07UXWZ8TNVFnRZUF
Watch it if you want a thorough introduction to Dominions 3.
< >
985 Comments

Shades of Bath Sep 8, 2013 @ 5:08pm
I enjoyed the second dominions demo, and from what I've seen this game does have quite a few new features which makes it high on my buy list. However, one thing that really bothered me in the second game was a lack of streamlining in the interface, like having tax control sliders to auto tax all or most cities, stuff like that which lets players negate having to go from each place managing the nuances if they don't need to. Otherwise, the game looks quite solid and I am glad it is greenlit.

class101 [linux] Sep 5, 2013 @ 12:45pm
This game has been reviewed and added to the Procedurally generated games collection

Leif Sep 2, 2013 @ 5:13pm
I really hope my Gamersfront CDkey will activate on Steam. I don't want be foreced to repurchase the game again.

Malfucius Sep 2, 2013 @ 8:29am
When is this game going to be available for purchase on steam? I have a horrible track record of buying games only to see them go on sale the next day. I'm afraid that if i buy this game right now on desura, that tomorrow it will be released on steam, on sale, bundled with a free game or something like that. Thats the luck I have with buying games, so when is this game going to be released for purchase thru steam????????
< >

Dominions 3: The Awakening has been Greenlit and is now listed in the Steam store. For the latest information, purchase options, and discussions for Dominions 3: The Awakening, please see it on the Steam Store or in the Steam Community.
Visit Store Page
For more details Visit Community Hub
For latest discussions
If you really, really want to, you can continue to the Greenlight page. Information on this page may be out of date, since all the action has moved to the areas noted above.