Greenlight > Games > squeek.'s Workshop
Greenlight is being retired. For more information on how to submit games to steam, refer to this blog post.
This item has been removed from the community because it violates Steam Community & Content Guidelines. It is only visible to you. If you believe your item has been removed by mistake, please contact Steam Support.
This item is incompatible with Greenlight. Please see the instructions page for reasons why this item might not work within Greenlight.
Current visibility: Hidden
This item will only be visible to you, admins, and anyone marked as a creator.
Current visibility: Friends-only
This item will only be visible in searches to you, your friends, and admins.
Fortress Forever
Description Discussions35 Announcements4 Comments1298 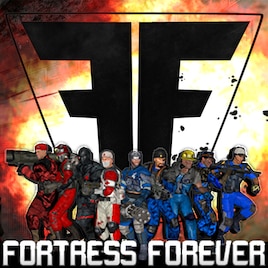 dad
Offline
See all 133 collections (some may be hidden)

View Fortress Forever in the store

Download Fortress Forever for free from the Steam Store

As weeks turn into months[www.fortress-forever.com], we are finally ready to make some more announcements.

Fortress Forever has a new website
http://www.fortress-forever.com/ has been redesigned and updated to be more relevant to the current state of the game.

Mapping Contest: ff_volleyball makeover
ff_volleyball is a fun little map that needs an aesthetic upgrade before it can be included with the game. Check out this thread for all the details[forums.fortress-forever.com].
Read More
Description
Release date: Has been released since September 2007
Requires only a FREE installation of the Source SDK Base 2006, download and play today at http://www.fortress-forever.com

Fortress Forever is a Source mod inspired by the earlier versions of the Team Fortress series (Team Fortress Classic and QuakeWorld Team Fortress). Our all-volunteer team has created this mod entirely from scratch and continued to develop it for over 5 years now. It was originally released in September of 2007.

Fortress Forever involves two or more teams, each with 9 available classes, competing in a variety of map-determined objectives (capture the flag, territorial control, invade and defend, etc). Each class has its own unique abilities and strengths that offer extremely varied playstyles. The gameplay ranges from fast-paced, competitive, and deep to absurd and chaotic.

IF YOU BELIEVE THAT THIS IS A RIPOFF OF TF2...
Butane Boss

Fortress Forever has been Greenlit and is now listed in the Steam store. For the latest information, purchase options, and discussions for Fortress Forever, please see it on the Steam Store or in the Steam Community.
Visit Store Page
For more details Visit Community Hub
For latest discussions
If you really, really want to, you can continue to the Greenlight page. Information on this page may be out of date, since all the action has moved to the areas noted above.