Greenlight > Games > Subterranean Games's Workshop
Greenlight is being retired. For more information on how to submit games to steam, refer to this blog post.
This item has been removed from the community because it violates Steam Community & Content Guidelines. It is only visible to you. If you believe your item has been removed by mistake, please contact Steam Support.
This item is incompatible with Greenlight. Please see the instructions page for reasons why this item might not work within Greenlight.
Current visibility: Hidden
This item will only be visible to you, admins, and anyone marked as a creator.
Current visibility: Friends-only
This item will only be visible in searches to you, your friends, and admins.
War For The Overworld
Description Discussions7 Announcements5 Comments755 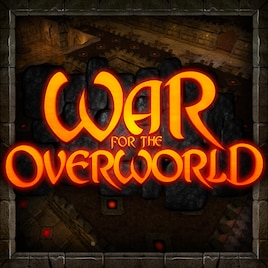 View War For The Overworld in the store

The 2nd instalment of WFTO Wednesday has been posted on our website![wftogame.com]

Read More
War for the Overworld has been Greenlit!
January 15, 2013 - Subterranean Games

Today we received some excellent news — War for the Overworld has been Greenlit on Steam! We are extremely excited by this and cannot thank you all enough for your support in making this happen.

Until next time Underlord,

Click here to view this update on our website[wftogame.com]

Click here to discuss this update on our forums[subterraneangames.com]

Read More
Description
Release date: Late 2013 / Early 2014
We've fused together the best components from the RTS and god game genres to create War for the Overworld; here you will find familiar elements from Dungeon Keeper, Overlord, StarCraft and Evil Genius. Your domain lies beneath the surface of this realm, and it is here that you will begin to build your sinful empire. The forces of good in this land will do everything in their power to stop you — read on to learn how you will thwart them.

Head on over to {LINK REMOVED}www.WFTOGame.com to pre-order now & fund War for the Overworld!

The Game
In War for the Overworld you have the power to create vast dungeons filled with hordes of evil minions who share a common goal: to crush the bones of the goodly heroes that dare to enter your unhallowed halls. You will command mighty armies, create vicious traps and cast dastardly spells to overcome the pitifully gallant armies that defend foolish principles such as "honour" and "righteousness" — it's going to be more fun than taking candy from a baby...

While defeating these dungeon crawlers will be remarkable fun, it will provide only fleeting satisfaction. Fortunately, there is a much larger enemy that stands between you and dominance of the Overworld.

War For The Overworld has been Greenlit and is now listed in the Steam store. For the latest information, purchase options, and discussions for War For The Overworld, please see it on the Steam Store or in the Steam Community.
Visit Store Page
For more details Visit Community Hub
For latest discussions
If you really, really want to, you can continue to the Greenlight page. Information on this page may be out of date, since all the action has moved to the areas noted above.