Store Page
Majestic Trials > Guides > AlphaAsh's Guides
This item has been removed from the community because it violates Steam Community & Content Guidelines. It is only visible to you. If you believe your item has been removed by mistake, please contact Steam Support.
This item is incompatible with Majestic Trials. Please see the instructions page for reasons why this item might not work within Majestic Trials.
Current visibility: Hidden
This item will only be visible to you, admins, and anyone marked as a creator.
Current visibility: Friends-only
This item will only be visible in searches to you, your friends, and admins.

Majestic Trials - The Trial Interface
By AlphaAsh
To succeed in Majestic Trials, you'll want to understand what information is available to you in a trial and how to control your wizard and their allies. This basic guide takes you through the various parts of the trial interface and explains the principles of using the interface in order to progress in a trial. 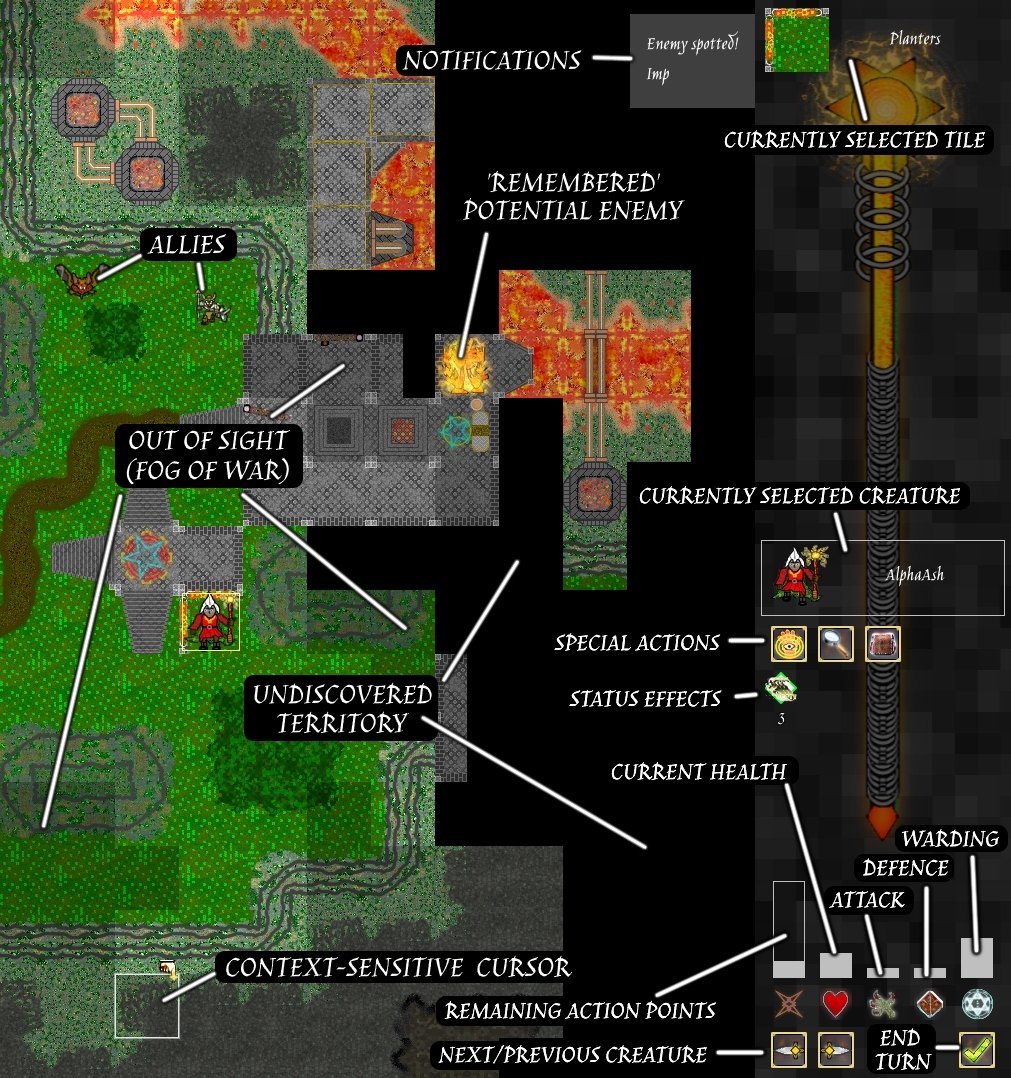 The trial interface is divided into to two sections - the play area on the left, and the control/status bar on the right.
Sight
How far a creature can see varies from creature to creature.

UNDISCOVERED TERRITORY
Any tile your wizard or their allies hasn't seen yet will be black - 'undiscovered territory'.

FOG OF WAR (FOW)
Any tile your wizard or allies have seen but cannot currently see (is out of sight) falls into the 'fog of war (FOW)'.

Tile in the FOW.

The same tile that can be currently seen.

MEMORY
Usually any potentially hostile creatures that end up in the FOW will be 'remembered' - a motionless icon will remain displayed. This is no guarentee that that is where the creature will stay - it's just the last known location. 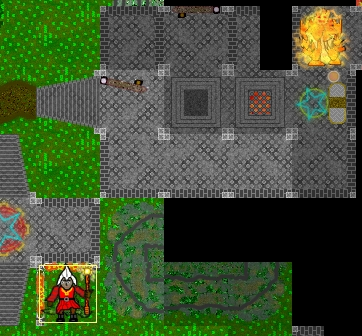 The Fire Golem (top right) is a 'memory'. It may not still be here next time you can see the tile.

RANGE & LINE OF SIGHT
Because the range of sight (ROS) varies from creature to creature, that means that it is not guarenteed that your wizard has a direct line of sight (LOS) to something an ally can see. Whilst your wizard knows about anything a controlled ally can see, your wizard can only cast ranged spells at tiles and creatures they have direct LOS and ROS to themselves. 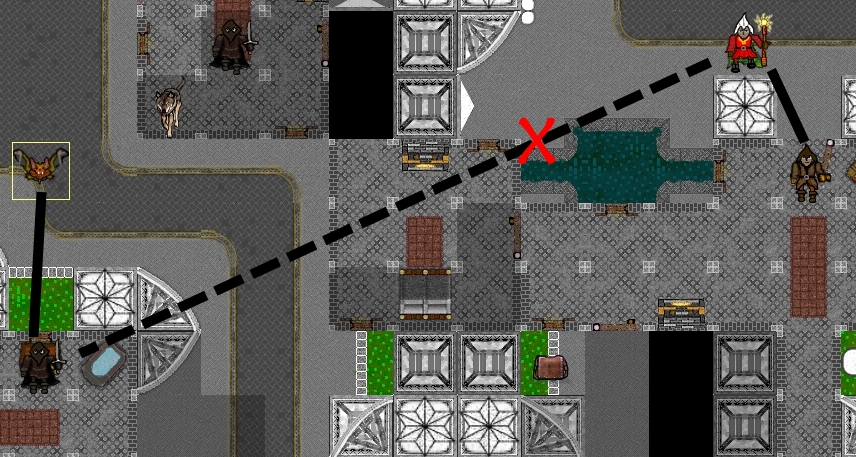 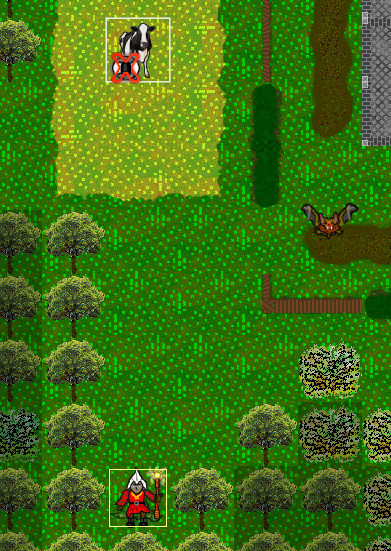 In this example, the wizard does have LOS to the Cow, but not ROS. The cow is too far away. The wizard only knows about it because their allied bat has LOS and ROS to it.
Selecting Things & Moving
A context-sensitive cursor (see the first diagram) is moved around the play area and then a left click made to select a creature or tile, or to carry out an action on that creature or tile.

MOVING
The same procedure is used to select a destination tile for a selected creature to move to. 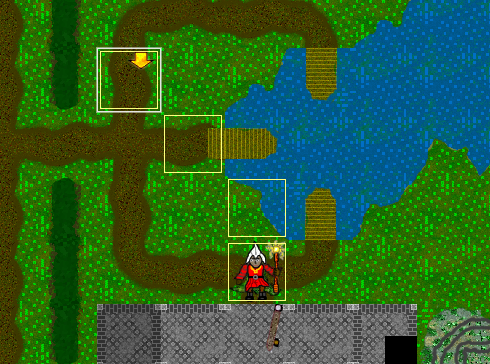 An example of a valid path being highlighted.

Sometimes you are going to want to save some APs for other stuff, like casting spells, so choose carefully just how far you decide to move a creature.

TERRAIN
Some terrain is harder to move through or over than other terrain. Tougher terrain costs more APs to move into.

Alternatively, press TAB to select the next controllable creature, or use the buttons available at the bottom of the control bar. 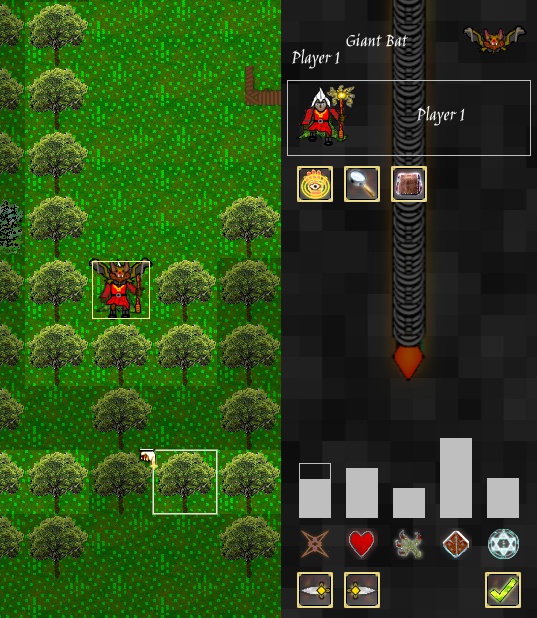 The wizard's head has not turned into a bat in this example. The bat is flying, which means it can occupy the same tile as the wizard, who isn't flying. With the bat selected, when the tile the wizard was in was clicked, the bat moved to the tile, instead of the wizard being selected.

Note how both the bat and wizard are displayed together in the control bar, because the bat is in the same tile as the wizard, which has now been selected.

MELEE ENGAGEMENT
When a creature moves into an adjacent tile of an opposing creature, it becomes engaged. Usually this means that the creature that moved is unable to move again until the melee is resolved or the opposing creature's turn has ended.

There are various circumstances that can break engagement, but those are better discovered through playing the game than being explained in this basic guide. 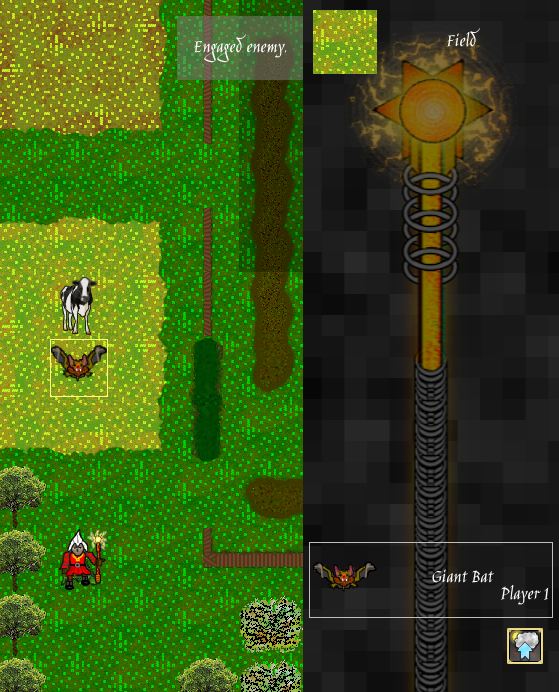 In this example, the wizard's allied bat has landed and then moved into a tile adjacent to the cow. This means the bat is now engaged (see the notification at the top of the control bar). The bat cannot move until the cow has had its turn or melee is resolved. The wizard successfully casting a Befriend spell on the cow would be one method not requiring a fight.
Special Actions
Some creatures have special actions available to them.

Flying creatures have a toggle for taking off and landing (default key is F). 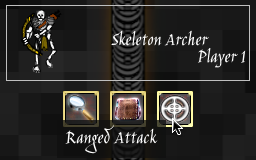 Creatures with some kind of ranged attack have a special action for enabling target selection (default key is R). 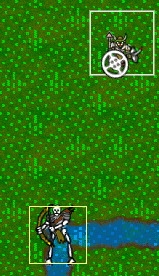 Casting Spells
To have your wizard cast a spell from their spellbook:

Hit (default) key B or use the Open Spellbook special action. 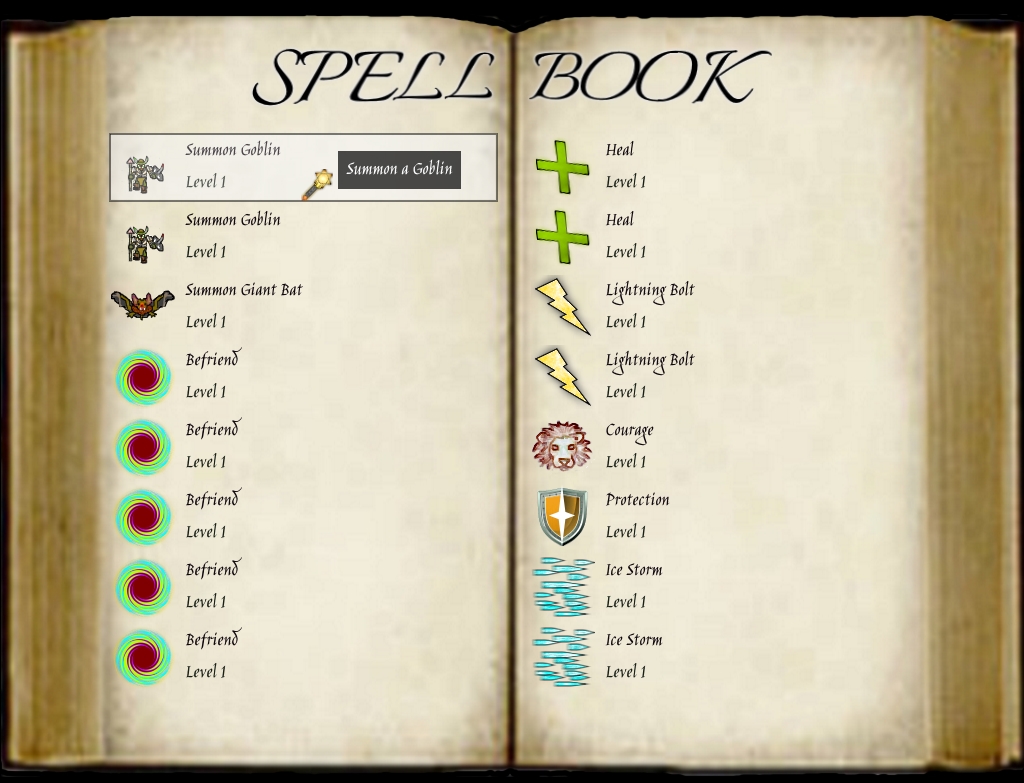 Select the spell to be cast and click it. 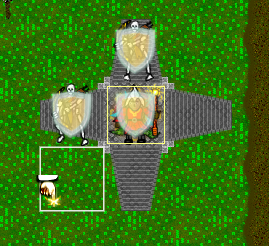 A Protection enchantment being cast. The caster and both allied skeleton archers adjacent to them receive the benefits.

If it's a ranged spell, the context sensitive cursor will change to allow you to select the target tile or creature. 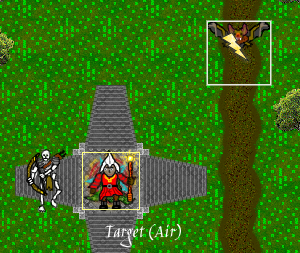 If you want to switch between ground targets and flying targets, hit default key T.

If you want to abort the casting of a ranged spell, hit default key ESC.
Melee Attacks

Making a melee attack is straightforward. With the creature you want to make the attack selected, hover the context sensitive cursor over the adjacent enemy. It will turn into a ripping claw. Left click to make a melee attack.

No real cows were harmed in the making of this guide or game.
Containers and Items
When a creature moves onto a tile with a container, the container will appear at the top of the control bar. 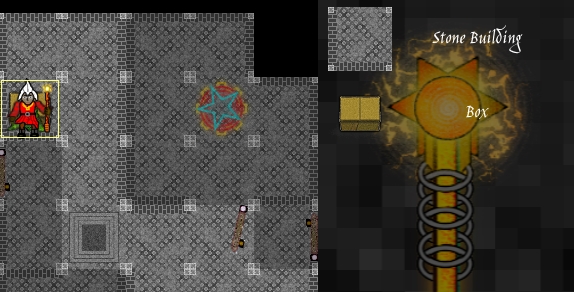 Click on the container in the control bar to open it (using a wizard's search special action will also open a container).

- Note not all creatures can open containers.
- Note that some containers can be locked and require a key to unlock them.

If a container has anything in it these will then be listed under the container's icon. 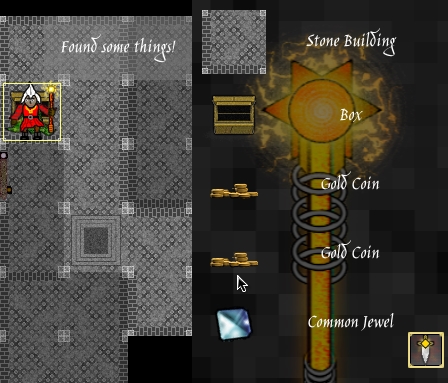 Click on an item in the control bar to pick it up and add it to a creature's inventory.

SECRET CONTAINERS
There are some special types of 'secret' container that are not shown in the control bar when you move onto them. You must use a search special action to check if there is in fact a container and anything in it.
Inventory Management
To manage a selected creature's inventory press the (default) key I. Or if it's your wizard, you can use the Open Inventory special action. 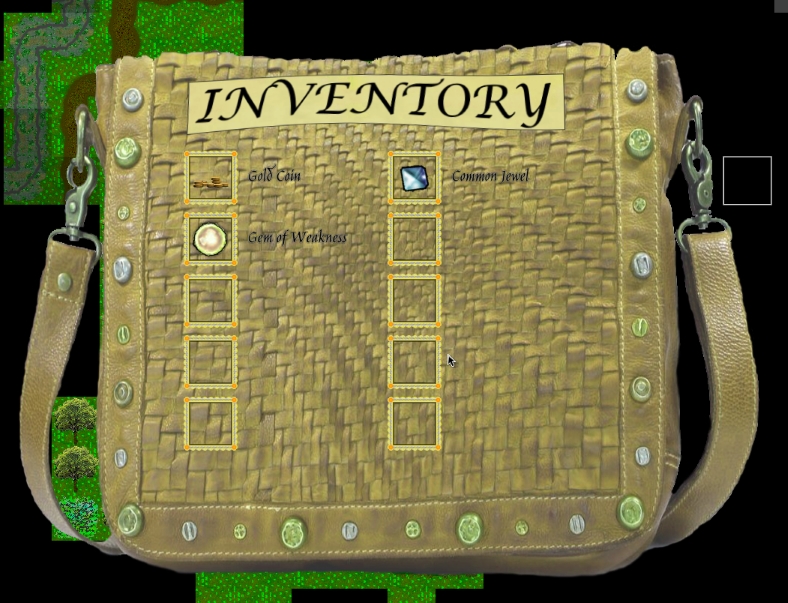 Using magical items usually results in the related spell being cast (like casting a spell from the spellbook).

Not all creatures can use all items.
Status Effects
Status effects are normally placed on creatures by spells or melee attacks. They are usually positive (enchantments) or negative (curses) and they are usually temporary. A counter is displayed on the effect indicating the number of turns before the effect expires. 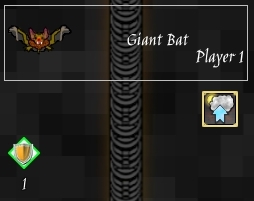 This bat has a protection enchantment with 1 turn left before it expires. 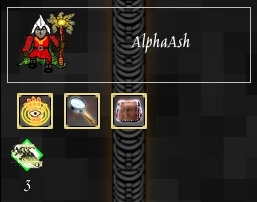 This wizard has a speed enchantment with 3 turns left before it expires.