Greenlight > Games > HungryPlanetGames's Workshop
Greenlight is being retired. For more information on how to submit games to steam, refer to this blog post.
This item has been removed from the community because it violates Steam Community & Content Guidelines. It is only visible to you. If you believe your item has been removed by mistake, please contact Steam Support.
This item is incompatible with Greenlight. Please see the instructions page for reasons why this item might not work within Greenlight.
Current visibility: Hidden
This item will only be visible to you, admins, and anyone marked as a creator.
Current visibility: Friends-only
This item will only be visible in searches to you, your friends, and admins.
Astroloco: Worst Contact
Description Discussions0 Announcements7 Comments243 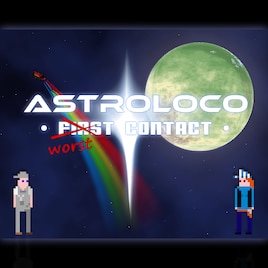 HungryPlanetGames
Offline
See all 41 collections (some may be hidden)

Astroloco: Worst Contact will be available to play at the Cybersalon event in London on the 25th of November. The event runs from 7-9 and there will be great talks and other games to play as well.

Thank you for the renewed interested in Astroloco over the past month! We’d like to announce that a few of the developers will be visiting Adventure X 2014 in London if anyone would like to meet up with us.

Also, if we do get the greenlight we’re planning on adding new achievements, trading cards and a few bug fixes (not that Astroloco ever had any bugs, and certainly nothing that made the game crash)... All for the official Steam release

Take control of a mistreated mechanic and a swashbuckling pilot as you try to save Gilbert Station from destruction at the hands of an alien death fleet!

Originally posted by Tom Sykes, PC Gamer:
The character sprites kinda look like they’re in the wrong game (in a good way).

Originally posted by BrutalGamer:
Do you like point and click adventures, space and trains? Then this is for you.

Originally posted by Ben Chandler:
I will play the trousers off of this game.

Originally posted by Murray Lewis:
I can't do a quote for my own game. It's unethical.

Originally posted by Ghost, AGS forums:
I once vowed to play every game where there is a fuel station in the desert with a loo next to it. You are my last hope.

HungryPlanetGames  [author] Jan 30, 2016 @ 10:12am
Hey guys - apologies for the lengthy time between being greenlit and our final release! Real-life has been getting in the way in all manner of different ways, but we're now getting the last few things done to get A:WC finished and on Steam!

Achievements & trading cards WILL be a thing, 100%.

flitterish Dec 10, 2015 @ 5:40pm
Congratulations on your Greenlight!
In light of Desura's bankruptcy, will those of us who purchased via IndieGala Greenlight Bundle 4, who received a Desura key, still be able to get a Steam key through IndieGala or some other distribution method if Desura becomes defunct before this game becomes active on Steam?

daviddoane  [author] Aug 25, 2015 @ 1:46pm
Hey everyone, we are working on it, we're just dealing with jobs and that we now live on different continents. But we fully intent to have the game out this year, sooner rather then later!

Astroloco: Worst Contact has been Greenlit and is now listed in the Steam store. For the latest information, purchase options, and discussions for Astroloco: Worst Contact, please see it on the Steam Store or in the Steam Community.
Visit Store Page
For more details Visit Community Hub
For latest discussions
If you really, really want to, you can continue to the Greenlight page. Information on this page may be out of date, since all the action has moved to the areas noted above.