Greenlight > Games > Trowsers's Workshop
Greenlight is being retired. For more information on how to submit games to steam, refer to this blog post.
This item has been removed from the community because it violates Steam Community & Content Guidelines. It is only visible to you. If you believe your item has been removed by mistake, please contact Steam Support.
This item is incompatible with Greenlight. Please see the instructions page for reasons why this item might not work within Greenlight.
Current visibility: Hidden
This item will only be visible to you, admins, and anyone marked as a creator.
Current visibility: Friends-only
This item will only be visible in searches to you, your friends, and admins.
Leisure Suit Larry in the Land of the Lounge Lizards: Reloaded
Description Discussions16 Announcements3 Comments893 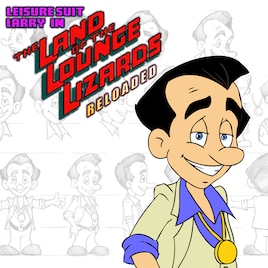 Trowsers
Offline
See all 134 collections (some may be hidden)
Kickstarter

View Leisure Suit Larry in the Land of the Lounge Lizards: Reloaded in the store

We are happy to announce that Leisure Suit Larry will be available to LINUX USERS! We are very pleased to be able to offer this title to Linux users, we are also excited to say that we will be releasing all versions (PC/Mac/Linux).

We hope this news sits well will all of the penguin fans out there!
Replay Games

* How does this game differ from the original?

The design includes the new locations, new puzzles, new art, dialogue, and new female character! Everything in the game is getting updated! In some cases, Al identified puzzle sequences that he had always felt could use improvement; in other cases, we agreed together that there would be ways to handle a given puzzle sequence either more logically, more entertainingly, or both. We were careful not to stray too far from the source material because we still want the game to feel like the game you’ve played before. But we also didn’t want original players to be able to blow through the game effortlessly.

* What languages will there be?

The game is being created in English and we will fully localize the game to as many languages as possible. We will start with FIGS (French, Italian, German, Spanish) and then branch out from there.

* What platforms will you support?

Initially we will support PC, Mac, iOS and Android tablets.

*When is the release date?

* Are you updating the entire Series? If so what are your plans after LL7?

The plans are to remake LSL1 and depending upon the response, remake the ENTIRE franchise. After that, we plan on making a new original game, Leisure Suit Larry 8.

* Who will be doing the voice of Larry?

None other than Jan Rabson, our one and only choice.

* Do you guys plan on keeping the quiz at the beginning of the game like in the original?

Yes, but with great new questions. We hope you have been brushing up!

For some more Q&A check out the Reddit AMA with Al Lowe, creator of Leisure Suit Larry
Reddit AMA

Read More
Description
Release date: Late 1st Quarter 2013
Leisure Suit Larry is one of the most iconic characters in the history of computer gaming.

The first game in the series, Leisure Suit Larry in the Land of the Lounge Lizards, was first published in 1987 and helped build the Sierra On-Line dynasty. Featured in a score of original software titles since then (not even counting numerous anthologies, repackagings, and cameo appearances), the series’ namesake hero, Larry Laffer, is a bumbling, persistent everyman who just wants to be loved. Is that so wrong?

With the help of Al Lowe, Larry’s progenitor and designer of all of Larry’s classic adventures, Replay Games is remaking the landmark first game for an entire new generation (or two!). Expanded and enhanced in every detail and ready for both mobile devices and PCs, Larry is being reborn for the players who might’ve seen their parents (or grandparents!) playing Larry behind closed doors!

Although the games were marketed as “naughty,” Al Lowe’s Larry was comedic but never explicit, and the remake retains that standard. There’s no full-frontal nudity, no four-letter words, and no on-screen sex. But we do have our comedic priorities: Larry is a story of a man on the make, and the game drips with innuendo, flirts with perversity, and oozes sexuality from every pixelated pore.

Dark Random Jul 27, 2014 @ 5:44pm
LOLNO i would not even get this i would only get that one but its very dirty dirtier than officebust.

xxlikonxx Dec 1, 2013 @ 12:37pm
really sad that i bought this and was to get a key after it got greenlit, still haven't recieved it months later. looks like it could be fun

Slayer_Mark Oct 8, 2013 @ 5:04pm
The price is a bit expensive. They probably should of thrown in a few extras like the original as well. Probably will buy it if is goes on special.

-Tritian- Oct 7, 2013 @ 7:14pm
this quote is from the build a greenlight bundle from groupees...
"Vote for the games on Steams Greenlight, and when the game get’s greenlit you will get a free Steam key.(All except the Indie Spotlight: Driftmoon)"
the link under the game links to this, and says to vote for this...