Greenlight > Games > Wadjet Eye Games's Workshop
Greenlight is being retired. For more information on how to submit games to steam, refer to this blog post.
This item has been removed from the community because it violates Steam Community & Content Guidelines. It is only visible to you. If you believe your item has been removed by mistake, please contact Steam Support.
This item is incompatible with Greenlight. Please see the instructions page for reasons why this item might not work within Greenlight.
Current visibility: Hidden
This item will only be visible to you, admins, and anyone marked as a creator.
Current visibility: Friends-only
This item will only be visible in searches to you, your friends, and admins.
Primordia
Description Discussions2 Announcements10 Comments512 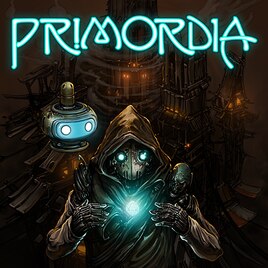 View Primordia in the store

Since we moved up the charts so far so fast, Steam has judged that Primordia can bypass the rest of the process and get Greenlit right away. Primordia now joins Blackwell, Gemini Rue, Resonance and Puzzle Bots on Steam!

We'll try to get the Steam version up and running before launch on the 5th. Watch This Space or subscribe to our twitter feed for more details (link on sidebar). If you bought the game from us directly, you will receive a Steam code by email as soon as they become available.

On behalf of myself, Wadjet Eye, and Wormwood Studios - THANK YOU for all the support (and votes!) that you've given us over the last few weeks. It's been nothing short of mindblowing.

Read More
Description
Release date: December 5th, 2012
An adventure in the tradition of Beneath a Steel Sky:

Story
What happened to the humans?

Set in a post-apocalyptic world strewn with cast-off machines, Primordia tells the story of Horatio Nullbuilt, a stoic robot who values his solitude and independence. Horatio spends his days studying the Book of Man, sparring with his droid companion Crispin, and tinkering with the airship they call home—a peaceful existence that becomes threatened when a rogue robot steals the energy source that the pair needs to survive. When Horatio and Crispin’s search for energy brings them to the dazzling city of Metropol, the simple quest to recover their stolen power core leads to unexpected discoveries about Horatio’s origins and a new understanding of the legendary humans who walked the earth before him.

Now available for pre-order!
You can try the demo or pre-order the game from the Wadjet Eye Games website.[www.primordiagames.com] (see sidebar for URL) All existing customers will receive a Steam Key when the game is Greenlit!

Press
Terrific and incredibly polished. Something you can't afford to miss.
-http://indiegames.com/2012/10/preview_primordia_wadjet_eye_g.html

Primordia is the beginning of something new.
-Beefjack[beefjack.com]

Primordia had us gripped!
-Game Debate[www.game-debate.com]

This might be Wadjet Eye's best release to date.
-True PC Gaming[truepcgaming.com]

Primordia has already sucked us in.
-Strategy Informer[www.wadjeteyegames.com]

One of the most artistically exceptional games in years.
-The Arts Desk[www.wadjeteyegames.com]

A strong, atmospheric world that you can’t help but want to experience more of.
-Capsule Computers[www.capsulecomputers.com.au]

Aaroneous Jul 29, 2013 @ 7:02pm
Looks incredible. Reminds me of DIG from back when I was a kid, though I'm not sure why. I cant wait to start playing and find out... what happend to the humans, see what I did there haha.

Primordia has been Greenlit and is now listed in the Steam store. For the latest information, purchase options, and discussions for Primordia, please see it on the Steam Store or in the Steam Community.
Visit Store Page
For more details Visit Community Hub
For latest discussions
If you really, really want to, you can continue to the Greenlight page. Information on this page may be out of date, since all the action has moved to the areas noted above.