Greenlight > Games > Hatchling's Workshop
Greenlight is being retired. For more information on how to submit games to steam, refer to this blog post.
This item has been removed from the community because it violates Steam Community & Content Guidelines. It is only visible to you. If you believe your item has been removed by mistake, please contact Steam Support.
This item is incompatible with Greenlight. Please see the instructions page for reasons why this item might not work within Greenlight.
Current visibility: Hidden
This item will only be visible to you, admins, and anyone marked as a creator.
Current visibility: Friends-only
This item will only be visible in searches to you, your friends, and admins.
StarForge
Description Discussions72 Announcements5 Comments1733 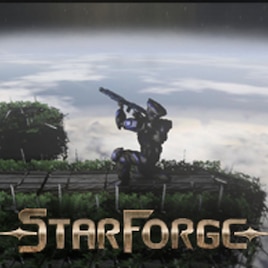 wandering_night
Offline
See all 148 collections (some may be hidden)

View StarForge in the store

We have also set up a store for anyone who missed the IndieGoGo campaign to help support us and buy StarForge:

Your continued support will go towards the Stretch Goals that were not hit and help fund us the opportunity to develop them.

StarForge is still over a year away from release, but by purchasing a copy you are granted access to alpha, beta and of course the full game when they become available. Anyone who bought a copy through our store will receive a Steam key when the game is released on Steam.

We have huge news – Valve has accepted us through Steam Greenlight!

We moved from over 950th place to 16th place in just over 4 and a half weeks, and then Valve greenlit our game!

We will be releasing on Steam when we are done developing StarForge over a year from now. So everyone who pledged will receive a Steam Key for all their copies of StarForge when we release on Steam in the future.

Thanks to everyone for voting and making this possible. This is great news as StarForge will release to a huge community of over 45 million gamers when it is fully done! This kind of support will really enable us at CodeHatch to hopefully grow the company in the future, and deliver a lot more innovative gameplay even quicker.

-Will, Steve and Nathan

Read More
Description
http://store.steampowered.com/app/227680/ You greenlit it! Now you can buy it!

Gather resources, build bases, craft your gear, and survive on an alien planet. In a distant future, our homeworld is in peril and as a last resort, specially chosen individuals leave on a one way mission to populate another planet, taking with them as much technology and resources they could carry. As you play, the StarForge universe will procedurally unfold itself around you in a unique way each time.

More ships containing refugees like yourself will land in the distance, economies will form, rival clans will fight for ownership of territories, and like with any sci-fi universe, there will be at least a few unlucky individuals that wind up being lunch for some ravenous alien creature. Its really a game made for PC gamers and is a sandboxer's dream.

It would make a *huge* difference if you help support us by purchasing the game and sharing this among friends. The difference could be the development of many more innovative features. The difference could be waiting less than half the time to play an update with that one feature you liked the most. The response from the Steam community has been outstanding, and frankly flattering. Thank you for this, and please keep it up! :D

Damn Sail Apr 10, 2017 @ 5:22am
The developer, named "Will" or "wswonin" thus far on Steam, having scammed countless amounts of people with a Pay For game, some paying $35 for promise of extra content and name at the end of the game's creation being stated; They didn't have this carried out as promised nor a refund. This game is now Free to Play on their main website after having been removed from Steam. The developer and those associated with this game's creation have actually committed a crime here and Steam has let them carry it out for over 5 years now. Amazing.

Kanharn May 9, 2016 @ 3:18pm
Codehatch the con artist should be banned off steam. Talk about a bottom of the barrel game company. Even after they stole everyones money for Reign Of Kings, they still failed and now that game is dead now ha ha ha.

StarForge has been Greenlit and is now listed in the Steam store. For the latest information, purchase options, and discussions for StarForge, please see it on the Steam Store or in the Steam Community.
Visit Store Page
For more details Visit Community Hub
For latest discussions
If you really, really want to, you can continue to the Greenlight page. Information on this page may be out of date, since all the action has moved to the areas noted above.