Greenlight > Games > Invigo Studios's Workshop
Greenlight is being retired. For more information on how to submit games to steam, refer to this blog post.
This item has been removed from the community because it violates Steam Community & Content Guidelines. It is only visible to you. If you believe your item has been removed by mistake, please contact Steam Support.
This item is incompatible with Greenlight. Please see the instructions page for reasons why this item might not work within Greenlight.
Current visibility: Hidden
This item will only be visible to you, admins, and anyone marked as a creator.
Current visibility: Friends-only
This item will only be visible in searches to you, your friends, and admins.
The Galactic Asteroids Patrol
Description Discussions2 Announcements4 Comments144 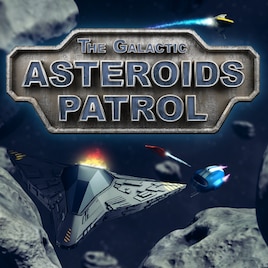 Invigo Studios
Offline
See all 12 collections (some may be hidden)
Recent Announcements View All (4)
The Galactic Asteroids Patrol is coming to Steam
November 30, 2019 - noamtoledano

I'm very happy and excited to announce the release of the game on January 15 2020.
These days I’m working hard to polish & prepare the game for launch.

You are invited to visit the Store Page and add it to your wishlist.
For more details on the game visit the game’s Website[www.asteroidspatrol.com]

Or join the Discord Server[discord.gg].

See you In the Patrol!

Read More
Thank You for Your Support!
October 20, 2014 - Invigo Studios

We must admit - we were caught completely by surprise with the news about being greenlit. Thank You all for your support and upvotes!

In the time that has passed, we gradually gave up on being approved on Steam and moved on with our lives. However, with this new development, we are very excited to launch The Galactic Asteroids Patrol on steam and we hope you will enjoy the game.

We are now in the process of dusting off the old code, making sure everything still works, and will release the game as soon as we can. After that, we want to re-visit some of the ideas we had for additional content. How much time and effort we can dedicate to The Patrol at this point depends on how well the game will do and the support & feedback we get from the community.

We will try to post updates here and also appreciate any feedback or suggestions you may have. In particular - we are contemplating what the game price should be. Unfortunately we didn't start with a f2p model (arguably we should have), and changing it at this point is not possible technically.

Thank you all again for your support!
Amir & Noam - Invigo Studios

Read More
Description
The Galactic Asteroids Patrol is a re-imaging of the classic style arcade games of blowing things up in outer space. However, we brought it forward to 2012 with current game technology and look & feel and other goodies of a modern game.

On top of the basic gameplay, The Galactic Asteroids Patrol offers:
You can find out more on our website, as well as download a free demo of the game:

For over three decades since its founding The Galactic Asteroids Patrol has been blowing up asteroids in every asteroids-infested corner of the Galaxy.

Once a new and proud initiative, the Patrol has now reduced to a small desolate and underfunded department in a forgotten corner of the vast galactic bureaucracy.

Of its once young and daring pilots those who survived count their remaining years to retirement on a small government pension. Its spaceships, decades ago considered the pinnacle of spaceship design and technology, are almost space junk to modern eyes - barely kept in service through repeated retrofitting and cheap part replacements.

Welcome to The Galactic Asteroids Patrol.
Popular Discussions View All (2)

You are invited to visit the Store Page
and add it to your wishlist.
For more details on the game visit the game’s Website [www.asteroidspatrol.com]

Or join the Discord Server [discord.gg] .