Greenlight > Games > Gentleman Squid Studio's Workshop
Greenlight is being retired. For more information on how to submit games to steam, refer to this blog post.
This item has been removed from the community because it violates Steam Community & Content Guidelines. It is only visible to you. If you believe your item has been removed by mistake, please contact Steam Support.
This item is incompatible with Greenlight. Please see the instructions page for reasons why this item might not work within Greenlight.
Current visibility: Hidden
This item will only be visible to you, admins, and anyone marked as a creator.
Current visibility: Friends-only
This item will only be visible in searches to you, your friends, and admins.
Three Dead Zed
Description Discussions0 Announcements4 Comments190 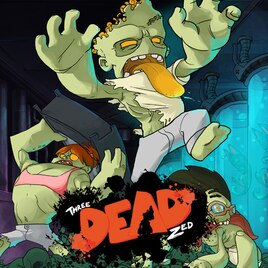 Zombies can get smarter! We’re proud to announce that Three Dead Zed has been updated to version 3.5. We’ve added a laundry list of features that are listed below. In the spirit of the Halloween season, we’re also reducing the price by 50%. But hurry because this is a limited time offer!

Now for some extra fun! For the next three weeks, we are giving away $200 worth of Steam Gift Cards (we’ll email you the code) . For the first week, there is no purchase necessary to win. But you know you want play Three Dead Zed - this is a lighthearted game featuring people dying by a cold-hearted monster!

OR Instagram this image (http://threedeadzed.com/images/socialmediapromo/InstaGram_Halloween2014.jpg)
with the same text. We’ll randomly draw two names on November 1 to win a Steam code worth $20.

Contest 2
This is the most fun way to enter. Own Three Dead Zed for a chance to win more Steam cash! Buy the game anywhere you want, but it has to have a Steam activation to be eligible. We’ll announce this contest on our various social media sites on October 31 for Halloween. (Hint: It’s an in-game scavenger hunt)

Contest 3
We’ll announce how to win on November 7. You’re going to need brush up your skills for this contest, so be sure to get some good playtime under your belt!

Thanks for stopping by!
- Braaaains

Wow! Finally starting to calm down from the excitement of yesterday’s Greenlight announcement and get back to providing updates. A huge “Thank you!” goes out to all those who took time to consider Three Dead Zed for Steam. We’ve attended various conferences showcasing Three Dead Zed and the show of support has been amazing. It’s always a joy for us to witness people enjoying their experience and laughing (for the right reasons) at our games.

We are currently working on adding new features to Three Dead Zed including a new ending, level tweaks, key bindings, steam trading cards, and achievements. Before a Steam release, we need to test this version of the game on more PC configurations, including SteamOS, in an effort to make your first experience with the game an enjoyable one, as intended.

As stated previously, if you bought the game from another store, you will get a code for the Steam version (assuming Valve’s policy doesn’t change). Your early support is very appreciated.

In the mean time, please vote for these games we feel need some attention.

Metal Dead: http://steamcommunity.com/sharedfiles/filedetails/?id=93086145
This adventure game is great and really funny. It won quite a bit of awards and deserves to be on Steam.

Rise of the Ravager: http://steamcommunity.com/sharedfiles/filedetails/?id=130963765
Our own little shout out. :) Please check the demo for yourselves! We feel you’ll be pleasantly surprised.

Thank you once again for your time!
- Fabian, Gentleman Squid Studio

Read More
Description
Release date: Currently Available
While breaking out of a testing facility, Three Dead Zed lets you take control of an experimental zombie that can transform into three unique and distinct forms. With quick reflexes, a little problem solving, and some rescued kittens, players make a violent exit that won't be forgotten by their captors. Three Dead Zed is an action/puzzle platformer that features beautifully hand drawn characters and environments.

Originally posted by Michael Irving:
"Three Dead Zed is a labour of love, and that love is as infectious as the zombies within."

Originally posted by Charles Battersby:
"This is a very creative, funny game that gives players the chance to help zombies finally get some payback."


Please subscribe to us on the following links on the right side of this page!
You'll see we like to have random give aways and competitions winning prizes such as Free games on Steam, Xbox points, and gift cards. Just for fun :)

We appreciate you stopping by and we hope you'll vote for our game!
< >
190 Comments

Gentleman Squid Studio  [author] Apr 4, 2014 @ 5:39pm
Shoppa and darude&storm Thank you! Currently working on updating the game to add improvements for the Steam release. We're thinking in about 2 months to do proper testing for various PC builds along with SteamOS/Linux distros.

Three Dead Zed has been Greenlit and is now listed in the Steam store. For the latest information, purchase options, and discussions for Three Dead Zed, please see it on the Steam Store or in the Steam Community.
Visit Store Page
For more details Visit Community Hub
For latest discussions
If you really, really want to, you can continue to the Greenlight page. Information on this page may be out of date, since all the action has moved to the areas noted above.