Greenlight > Games > DISHTY's Workshop
Greenlight is being retired. For more information on how to submit games to steam, refer to this blog post.
This item has been removed from the community because it violates Steam Community & Content Guidelines. It is only visible to you. If you believe your item has been removed by mistake, please contact Steam Support.
This item is incompatible with Greenlight. Please see the instructions page for reasons why this item might not work within Greenlight.
Current visibility: Hidden
This item will only be visible to you, admins, and anyone marked as a creator.
Current visibility: Friends-only
This item will only be visible in searches to you, your friends, and admins.
Humans Must Answer
Description Discussions4 Announcements11 Comments299 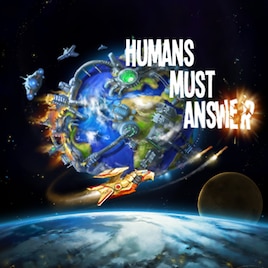 DISHTY
Offline
See all 45 collections (some may be hidden)

View Humans Must Answer in the store 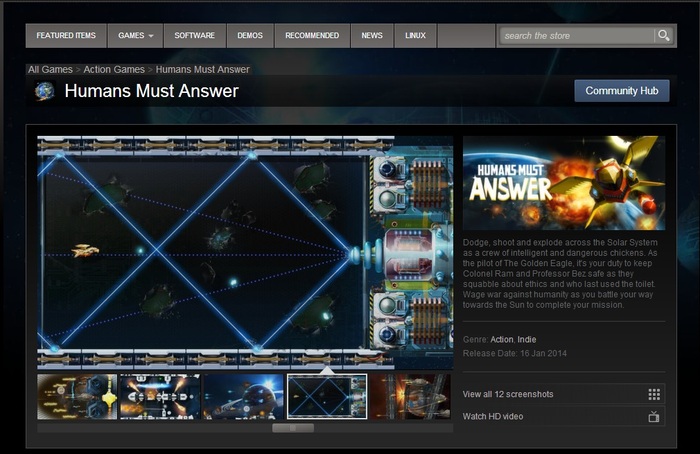 The day has come at last. Humans Must Answer is now available to purchase on Steam:

We're very excited to have our little shmup on Steam, so thanks to everyone who voted for our game on Greenlight! We did it!

Added Features
As we have had some time to work on Humans Must Answer since it was first released in July last year, we've added and changed a couple of elements of the game based on feedback we've received.

First off, the game now has checkpoints! Yep, people kept complaining that the game was too hard and tiresome, so we've added checkpoints that should make it more enjoyable.

Lastly, the game now has Steam achievements and Steam cloud saving! We had a little bit of fun coming up with some achievements for you all to aim for while playing the game. Hopefully you have just as much fun trying to earn them. The saving just means you can transfer saves across Steam supported machines.

Spread the word!
We've already asked a lot of you, and we are extremely grateful for the support we've received so far. So thanks once again for all of your help.

Being cheeky, we'd love it if you could help us spread the word about Humans Must Answer being available on Steam. Please tell any gaming websites you read and YouTubers you watch to ask us for a Steam code so they can cover it, too!

Oh, and if you could leave us a user review on the Steam page (at the bottom), that would be excellent!

Thanks once again for all the support. Humans Must Answer wouldn't be where it is now without your kindness.

Wow, it actually happened. Our little horizontal shmup, Humans Must Answer, has been Greenlit!

It happened yesterday, September 18th. We were given the big thumbs up from Valve along with 24 other games. It's such a good batch of games too.

We are so honored! Thanks to everyone who has supported us, on Greenlight and outside of it.

We're now working on optimizing Humans Must Answer for Steam, making some improvements on the game based on the feedback we've had since release.

We'd love to say when you can expect to see Humans Must Answer on Steam, but we're not sure ourselves yet. We'll be busy working away as fast as we can to ensure it's as soon as possible, though. We'll keep you updated, and once again, thank you!

You play as the pilot on board a Scout ship called The Golden Eagle, which is manned by a crew of intelligent and dangerous chickens. After discovering the Solar System in which we humans reside, they attempt to establish contact but are surprised when the only answer is hostile!

So starts their explosive trip towards their goal, the Sun, along which they'll meet the peculiarities of this bizarre future and show no mercy to the fleets of humans and robots that dare stand in their way.

Slick back your combs and fiddle with your wattles, for Humans Must Answer features an emphasis on danger evasion, hidden bonuses, epic boss fights and a deep upgrade and points system. There are plenty of sumptuous explosions to feast your eyes on as well!

Players can place temporary turrets, experiment with combining different weapons and challenge themselves by finding and obtaining all of the hidden eggs. Did we mention there are explosions too?

Originally posted by Gnome, IndieGames.com:
Yes, it does indeed look like a proper shmup in the most classic of manners and does come complete with some fantastic graphics and lots and lots of explosions.

Originally posted by Katie Williams, GameSpy:
...it's looking like a fun throwback to arcade shooters of yore.

Originally posted by RossZ, IndieGamesDig:
Humans Must Answer just might end up having that winning trifecta of challenging level design, exciting game mechanics, and mirror-sheen-polished visuals.

Originally posted by Nathan Grayson, Rock, Paper, Shotgun:
But eggstraterrestrials galaxy-faring coop-flyers are – believe it or not – only part of what makes Humans Must Answer intriguing. The other half of that equation, then, is the oh-so-silly shmup’s pedigree.

Originally posted by John Polson, IndieGames.com:
Oh crap, what am I guilty of now? And if I'm a cyborg, can I be only partially accountable?

Sumom Games is a small independent game studio based in Kiev, Ukraine. It was founded by Denis Matveenko and Eugeny Yatsuk in 2011.

Our creative team consists of those with work experience in large companies over well-known projects such as S.T.A.L.K.E.R. and Xenus II: White Gold. Our goal is to create interesting, challenging and original games that combine elements from different genres. Humans Must Answer is our first project.

Thanks to everyone who helped us get it there :)

sergioreynel Nov 25, 2013 @ 8:27am
Hi if your looking for a site to download all pc related things go here: www.pcgameiso.com/ if you create an account if you could please put my username inside the referrer box: my user name is sergioreynel

Humans Must Answer has been Greenlit and is now listed in the Steam store. For the latest information, purchase options, and discussions for Humans Must Answer, please see it on the Steam Store or in the Steam Community.
Visit Store Page
For more details Visit Community Hub
For latest discussions
If you really, really want to, you can continue to the Greenlight page. Information on this page may be out of date, since all the action has moved to the areas noted above.